Home » Lifestyle » When can we stop pretending that Bluey is ‘must-see viewing’ for grown-ups?

I wish to make one thing perfectly clear, and I hope I do not get accused of hyperbole or of allowing my emotions to run away with me when I say this: Bluey is, basically, fine. I really mean that: it’s fine. Put Bluey on the telly in my house and I will neither scream in anguish nor vomit in disgust, and that’s more than you can say for a lot of shows.

But what if – and I know this is a proposition likely to cause local industry defenders to start snorting and pawing the ground – what if “fine” is all it is? What if Bluey, in fact, is sitting comfortably in the “pretty good for a kids’ show” zone and hasn’t ever gotten close to “must-see viewing for grown-ups”? 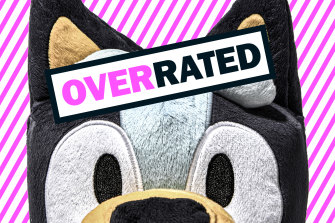 I hate to pick a fight with Bluey, because as I said it’s a perfectly fine show. In fact, my fight is not with the show itself, but rather with a fandom that has pushed onto the world the accepted wisdom that these little vignettes represent the highest expression of human creativity that we have yet been blessed to gaze upon.

Have a look online at what people are saying about Bluey. You’ll see a million or so comments along the lines of: “OMG I’ve just discovered Bluey and it’s the purest joy I’ve ever experienced”; “Just watched the new Bluey. In tears”; “There is nothing on Australian TV right now better than Bluey – FACT”; “I showed Bluey to an elderly miser and he went straight out and bought a Christmas goose”; and so on and so forth. The average review of Bluey is part passionate love letter, part prayer of thanks to a benevolent god that He has seen fit to grant us the ultimate pleasure of this cartoon.

But surely I cannot be the only person on this good earth to watch the thing and think, OK, this is nice, and occasionally funny, and an interesting window into the myriad whimsical ways that dogs can be nice to each other, but… it’s not THAT good?

Part of the reason it’s not that good, of course, is that it’s a children’s show. Children’s shows can’t ever be as good as the best shows for grown-ups, because they have to be understood and enjoyed by children. I’m not saying that children are stupid, because it’s all relative: children are clearly much smarter than, say, pigeons. They’re only stupid when you compare them to real people, i.e. adults. The proof that children are stupid can be seen in the very existence of children’s TV: if children were as smart as adults we wouldn’t have to make children’s TV, we could just show them Breaking Bad and The Office like normal people.

Breaking Bad and The Office are, incidentally, two of the TV shows that are much, much better than Bluey. There are many others, eg: Archer, Russian Doll, Fawlty Towers, The Simpsons, David Attenborough’s Planet Earth, The Amazing Race, Jonathan Creek, Frasier, Sons of Anarchy and The A-Team. And, like, a few hundred more. But it’s not Bluey’s fault it’s worse than all those shows: it was made for kids, and you can’t make really great shows for kids, because they won’t appreciate them. There’s no use trying to make a child enjoy good television: you just need to let them while away the hours in front of garbage until their brains activate. That’s why the Wiggles have more money than most countries.

Which is why, of course, so many parents adore Bluey: compared to the usual godawful hyena offal that the world of children’s TV throws up, it’s a masterpiece. But anything can look like a masterpiece if you put it next to something horrible enough. You can make Crocodile Dundee II look like Citizen Kane if you just watch Houseboat Horror right before it. Not that Bluey is the Crocodile Dundee II of Australian kids’ TV. It’s more like the Lantana: perfectly fine but with a reputation far outstripping its actual quality because our expectations were so low.

That’s the other thing about Bluey, of course: it’s Australian. And even more than its juvenile target audience, this fact helps explain the paroxysm of religious ecstasy it triggers. Because we’ve been conditioned to assume Australian TV is rubbish. We know that some domestic shows are decent, but we’re always pretty surprised when one comes along. The classics of local TV tend to be lonely islands in a thick, muddy stream of lazy cop shows, exploitative reality, and sitcoms and sketch comedies that could be classified as biohazards.

So when we see a show like Bluey – cute, cheerful, not inclined to make you want to gnaw your own face off – well, it is like a spring just started gushing forth in a desert. But here’s the thing about springs in the desert: the quality of the water tends not to be in direct proportion to the gratitude with which a dying man drinks it.

There comes a point, in a nutshell, at which we have to get over it. And Bluey fanatics: that point came a long time ago.

Optical illusion with motion blindness goes viral – can you see what’s going on?