Clive Palmer says he doesn’t speak for just the “noisy minority”, and his party membership isn’t made up of only anti-vaxxers.

The Queensland tycoon is the backer of the United Australia Party, led by former Liberal Craig Kelly, the member for Hughes. The party is running candidates in every seat and in an interview on ABC radio on Thursday morning Mr Palmer claimed to speak for the majority of Australians as he aired disproven anti-vaccine claims. 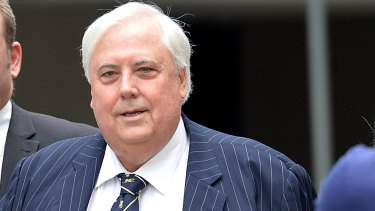 Clive Palmer has made several claims about vaccines in an interview on ABC radio.Credit:Bradley Kanaris

It is worth noting more than 86 per cent of eligible Australians aged 16 and up are now fully vaccinated, and nearly 92 per cent of that population – or nearly 19 million Australians – have had one dose of a COVID-19 vaccine.

Mr Palmer also made a series of claims about COVID-19 vaccines, including safety and people’s rights in that interview. Many of his claims are incorrect. Here’s why.

Palmer: “I’ve been vaccinated with most vaccines except this one because it hasn’t gone through any testing”

To say the vaccine has gone through no testing is totally false. All the COVID-19 vaccines in use in Australia (and all vaccines approved here in general) have gone through a rigorous clinical trial process first, the third trial involving large numbers of people from different parts of the globe.

The data from those trials is then sent to medical regulators, including Australia’s Therapeutic Goods Administration. The head of the TGA, Professor John Skerritt, has stressed multiple times that the TGA has conducted the exact same approval process it uses for other vaccines and medicines. The difference here is they had more people working on it, and the work was being done around the clock.

The TGA has also been undertaking rolling reviews, as has the vaccine expert panel the Australian Technical Advisory Group on Immunisation, constantly looking at new real-world data as millions of people around the world get vaccinated with various coronavirus vaccines.

Palmer: “It’s well known that if you’re vaccinated, you can catch the virus, and you can pass it on. It makes no difference at all from a public health context.”

Melbourne’s ICUs are filled with critically ill unvaccinated patients. The latest data from Victoria shows that 66 per cent of the 285 COVID cases in hospital are not fully vaccinated, while 74 per cent of those in ICU were not fully immunised.

In Sydney, unvaccinated people who caught the Delta strain at the height of the outbreak were 16 times more likely to end up in intensive care than their vaccinated counterparts.

Associate Professor Bette Liu, who co-authored an analysis of the vaccination status of cases in NSW, said high vaccination rates were “certainly going to reduce the burden of disease” from the circulating virus.

“The fact that we’ve seen decreasing rates of disease through this outbreak as well, is also an indication of the effect of vaccines,” she said.

Palmer: “Many people take the view that they may die in two or three years time because side effects are not just when you take the vaccines.”

Actually, side effects for vaccines are fairly immediate. The question of long-term side effects is more complicated – but in short, scientists are confident the vast majority of side effects are discovered in the first few months after immunisation.

Scientists who have spoken to The Sydney Morning Herald and The Age say this is backed up by data on older vaccines, including measles and the HPV shot.

As the head of Clinical Research at the National Centre for Immunisation Research and Surveillance, Professor Robert Booy, said when discussing 10-year safety data: “The best analogy is, we have a dozen or more routine vaccinations, for which we know the long-term safety profile is excellent, and adverse events that are important happen within six minutes or six weeks of getting the vaccine.”

Palmer: “There’s coercion being used all the time: if you’re a father, supporting five children, your job is taken away by the government interfering, by Scott Morrison taking an action, you’re losing your livelihood.”

State’s control the health orders and decisions on vaccine mandates, and most have made vaccination a requirement for healthcare workers and aged care staff after national cabinet agreement. Some states have also brought in more vaccination rules, requiring proof-of-vaccine for those wanting to enter gyms, restaurants or nightclubs.

But there’s a difference between coercion – forcing someone to do something – and making vaccines a requirement for doing certain things, like working in a hospital with vulnerable patients.

As Tasmanian Senator Jacqui Lambie said earlier this week: “If you’re able to get vaccinated but choose not too, discrimination is the wrong word.”

Her argument? People have the freedom to make choices, but sometimes, those choices have consequences.

“Being held accountable for your own actions isn’t called discrimination, it’s called being, you wouldn’t believe it, a goddamn bloody adult,” Senator Lambie said.

If Mr Palmer’s numbers were correct, it would mean one in 10 Melburnians had turned up to the protest.

There were large rallies across the country in protest over government restrictions and vaccines on November 20, but estimates of the crowd sizes were all far lower than claimed by the organisers and Mr Palmer.

NSW Police put the Sydney protest attendance at 10,000, and estimates of the Melbourne crowd put numbers at more than 10,000 – certainly well short half a million.

Stay across the most crucial developments related to the pandemic with the Coronavirus Update. Sign up to receive the weekly newsletter.

Lidl are selling pillows and duvets that keep you cool on hot summer nights from just £6.99