The IPC’s determination, released on Wednesday, comes a day after the Resources Regulator issued 16 charges against Whitehaven over alleged breaches to its mining and exploration licences. Environmental groups had sought a delay in the Vickery decision, pending the outcome of the related court case. 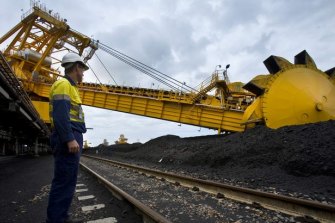 A win for Whitehaven with the Independent Planning Commission approving the miner’s Vickery Extension project.Credit:Louie Douvis

The IPC said it had scrutinised issues such as the mine expansion's impact on water resources, greenhouse gas emissions, noise and farm land.

It found that on balance and with the 184 "strict conditions" imposed, the extension impacts "are acceptable and the project is in the public interest".

The project, deemed a State Significant Development, will increase coal output by about a quarter to 168 million tonnes over 30 years. It is located near Boggabri in northern NSW.

The mine's peak extraction rate will double from 4.5 million tonnes a year to 10 million tonnes, and the area disturbed by the mine will expand by 776 hectares, the IPC said.

The commission noted the recent prosecution proceedings including submissions "raising the Applicant’s regulatory compliance history and … that the Applicant was not a fit and proper person in respect of the Project".

However, "the Commission notes that there is no fit and proper person test in respect of development consents and that matters such as the identity of an applicant or past planning law breaches have been found to be irrelevant considerations for consent authorities such as the Commission".

Are furlough applications open and when will payments start? – The Sun