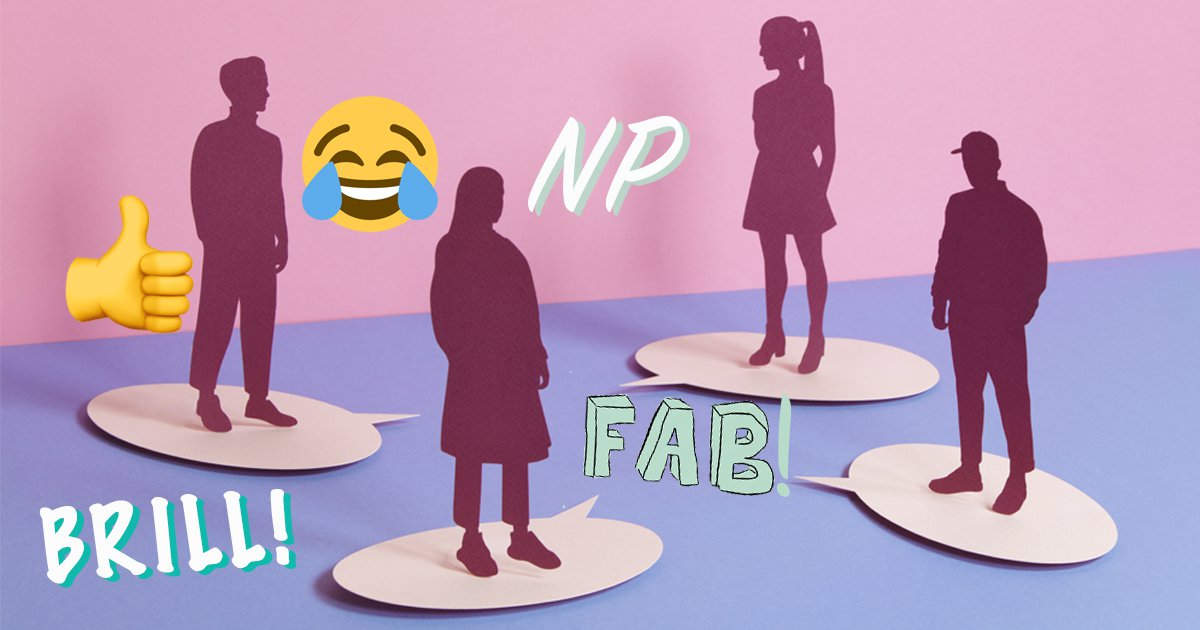 Ever find yourself typing things to work colleagues that you would never say in real life?

You are very much not alone.

As we settle into almost two years of widespread remote working, many people still haven’t met their workmates in person, and the way that we communicate is changing.

While there are many benefits of working from home, months of spending the days at a makeshift desk, in an empty room – with the main form of colleague communication being via Slack, or other forms of instant messaging – have started to take their toll.

Yes, we might have the odd Zoom call, but primarily communicating through the written word has become commonplace. And this has consequences on how we talk to one another.

Before, in our pre-pandemic lives, a colleague could ask a question such as ‘have you emailed so-and-so?’, over a desk, as part of an ongoing dialogue.

You could then have either answered, ‘yeah’, or ‘not yet, but I will,’ without too much interpretation of how you were answering. Or of how the question was being asked in the first place.

However, when you switch that interaction to messenger, there is no sense of tone and, all of a sudden, the question can be perceived as accusatory, or the answer curt.

That extra layer of communication is making many of us pursue increasingly out-of-character turns of phrase to convince people that we’re not actually annoyed/rude/sad.

Dr Richard Smith, founder of the London Psychologist clinic in Harley Street, suggests that, generally, communicating through writing online can lead us to be more direct in our communications.

‘On the one hand, this can be useful,’ he explains, ‘as it conveys the essence of the message in the most concise form.

But on the other hand, it could lead to a sense of shortness, which the reader could perceive negatively.

‘In psychology, we sometimes refer to this as projection,’ he explains. Adding that: ‘As humans, we tend to project our own thoughts and feelings onto the messenger when reading.’

We can all relate to reading out the same message in two different tones of voice, and how much the meaning changes with each version – this is no different.

‘Being mindful of our tendency as human beings to do this can be helpful so that we can step back and revaluate the sender’s intentions,’ Richard says.

Sally Baker, senior therapist, agrees with this. According to Sally, using just written communication, it is impossible to be nuanced, or to illustrate any subtleties of tone. This makes it easy to be mistaken for being abrupt.

‘People compensate for this by using emoticons, exclamation marks and being overly enthusiastic in their use of words,’ she says.

‘It’s a human attempt at human connection and a desire to demonstrate that they are friendly, collegiate and co-operative.’

Elongating our words, by writing things like ‘thank you soooo much’, ‘hiiiii’, or ‘baaaack from my break’ also are attempts to be friendly, casual and express an amount of personality. The same goes for adding exclamation marks.

‘Very often, you have to think more clearly about how you’re going to frame your words, particularly if you want to come across in a positive way.’

She also makes the point that, often, it’s about getting your personality across – especially if you haven’t met colleagues in real life – which is why we tend to overcompensate by using really flowery and expressive language.

‘People say things like fab, cool, brill – and use emoji – because they want to let the person they are communicating with know that they are approving of their position, or what they’ve been told, or asked –in a short amount of time and space.

‘You can do that quickly and easily by using words, or images, like this. ‘

As well as the speed and ease of using this type of language, part of the reason we’re all using it is because we’re simply using so much of ‘text’ or ‘Slack’ speak now, suggests Dannielle Haig, psychologist.

‘I think that we now converse more via technology than in person or verbally, and so we’ve picked it up out of habit,’ she says.

‘Language changes often with time and fashions, which is why we no longer speak Shakespearian English, and why so many Americanisms are now in the British dictionary, due to media influence.’

Slack and instant messaging language, have become just as much part of our vocabulary as anything else: They’re some of the most common forms of communication, and aren’t going anywhere any time soon.

Emoji instead of body language

We all understand that a love heart emoji or laughing crying face goes a long way to let a person know what emotion you are trying to express. (Thumbs up remains controversial – are they rude on their own? How about followed up with an ‘x’?)

And so, many of us have found ourselves using emoji at work, over Slack – something that was previously relegated to WhatsApp chats.

This is partly because, not being able to see our colleagues means we can’t use other forms of communication such as body language, the intonation of voice and other important means of communicating, explains Richard.

‘Psychologists have long since known that much of our communication as human beings is non-verbal,’ he says.

‘Emoji have been an attempt to convey emotion to those we can’t see, but it is somewhat limited.’

He adds that studies suggest that 55% of communication is body language, while 38% is through tone of voice, and 7% is actual words spoken or – in this case, written/typed.

Of course, then, we have to try to jazz up our words, to ensure they can’t be misconstrued as being negative, or rude. They’re doing the work that a smile or chirpy tone of voice once would have done.

However, there can be a downside to the overuse of these terms, in that we can appear over-familiar in certain situations.

‘We may be trying too hard to compensate for the lack of opportunity to communicate our feelings and thoughts in any other way,’ explains Richard.

He suggesting being ‘self-reflective’ (not self-critical) and analysing why and how you use the terms in these contexts.

‘Is this form of communication appropriate for the context? Is there a better way of putting this? What assumptions am I making before I send this?

‘These might be some of the questions we could ask ourselves.’

It can increase negativity as well

However, there is another side – and it’s not all love heart emojis and exclamation marks.

Emma explains that we might actually see the increase in written communication resulting in more curt or conflicting communication, as we don’t have to deal with the immediate consequences, in a face-to-face setting.

‘Therefore we might express ourselves more negatively, if we feel negatively towards that person,’ she says.

She adds that, in general, it has changed the directness of our communication.

‘We either want to be more indirect and amore flowery and expressive because we want to let the person know that everything is alright, and there is no issue,’ says Emma.

‘Or, we can be quite brutal and curt because we don’t have to think about the response that we would have to if we were in the same room.’

This way of communicating is here to stay

Communication with colleagues has changed drastically over the last few years and Dannielle points out that, now we have a more permanent hybrid working style, it’s important that we start concentrating on how we are communicating with others.

‘I think we’re trialling our new communication style, which is normal as this is a new scenario for us all,’ she says.

‘Trying to express in written word what might have been shown in a facial expression is difficult, and the tone of emails can easily be misread.

‘I imagine we’re all trying to express ourselves and not offend others or misconstrue messages.’

Finally, the experts agree that it can be detrimental to colleague relationships to not communicate in person, or at least over video call.

‘You don’t feel like you know your colleagues very much if you’re just communicating through Slack – face to face is really important,’ says Emma.

‘The written form can build relationships but it’s often short and sharp because everyone is busy, so it’s really important to start to have video calls and in person meetings if possible, to build those relationships.

Plus, she adds, ‘research has shown that you get a better resolve to a difficult situation when you do it face to face, and you tend to get an inflammatory or escalated response by written form, or Slack, for example.

‘Think carefully when you go to write a difficult email – think about setting up a video call, or a phone call, so that you can be sure that they’re not getting interpreted wrongly.’

Dannielle adds that, when we know someone, we can read a message in their tone and voice, which gives us more of an idea of their mood and meaning.

‘If we don’t know someone and their mannerisms and personality, it can make it difficult to know how to read their emails and slacks,’ she says, ‘ and easier to project an idea or image of someone onto their words.’

The idea that you have projected onto them, of course, might not be true.

As a final word, Sally adds that the ‘gold standard’ of all communication is eye-to-eye in the same space. Anything else is a reduction of that.

Maybe one day, when we’re all back in the office, we’ll find ourselves frantically blowing kisses and giving enthusiastic thumbs ups to each other, in response to questions.

Shouting ‘fab!’ and ‘perfecto!’ across the desk, and screaming ‘I’m baaaaaaaack’, when we return from a toilet break.

In the meantime, we will no doubt continue to evolve our online language and develop further ways of communicating our personalities over Slack. (Now that we think about it, maybe gifs are due a comeback? Sounds brill!)

Prince Harry Is 'Clearly a Lot Happier' With His Work in the U.S. Than as a Royal, Journalist Says