When will it end! MORE disgruntled PrettyLittleThing shoppers show off the VERY disappointing purchases that looked nothing like what they ordered

PrettyLittleThing has been subject to a backlash from customers of late because of  clothes that look nothing like the garments advertised online, and the complaints continued this week with no fewer than four in 48 hours.

Twitter user @SophiaCK from the US took the retailer to task over a plus-size jacket which was ridiculously over-sized in a series of hilarious tweets.

Meanwhile two shoppers from the UK and Ireland hit out at the retailer when jumpers they ordered arrived with sleeves so long they reached their knees.

And Megan Leese from Glasgow called on the retailer to re-evaluate its sizing after a size four dress she ordered was more like a tent when she put it on, and barely covered her breasts.

The coat that looked three sizes too big 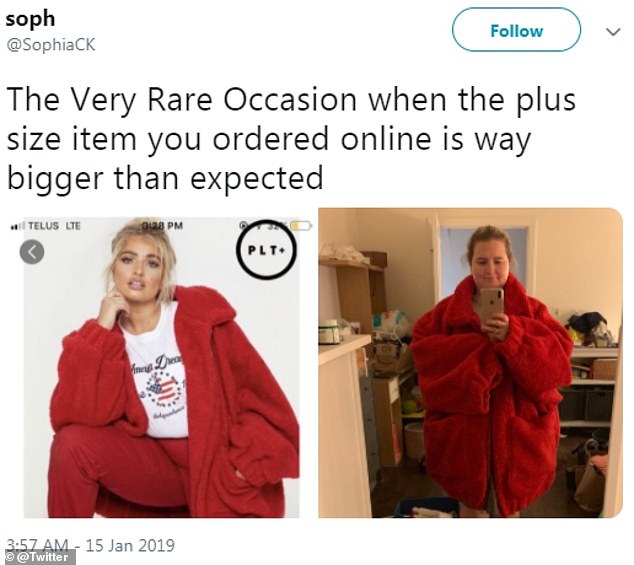 Twitter user @SophiaCK from the US took the retailer to task over a plus-size jacket which was ridiculously over-sized in a series of hilarious tweets. She is the latest in a string of shoppers to have been left disappointed with the clothes they received from PrettyLittleThing 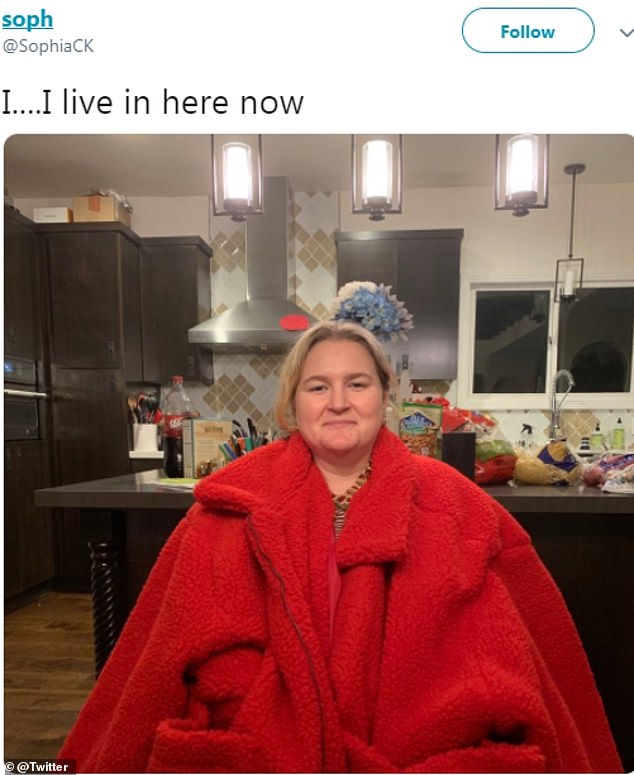 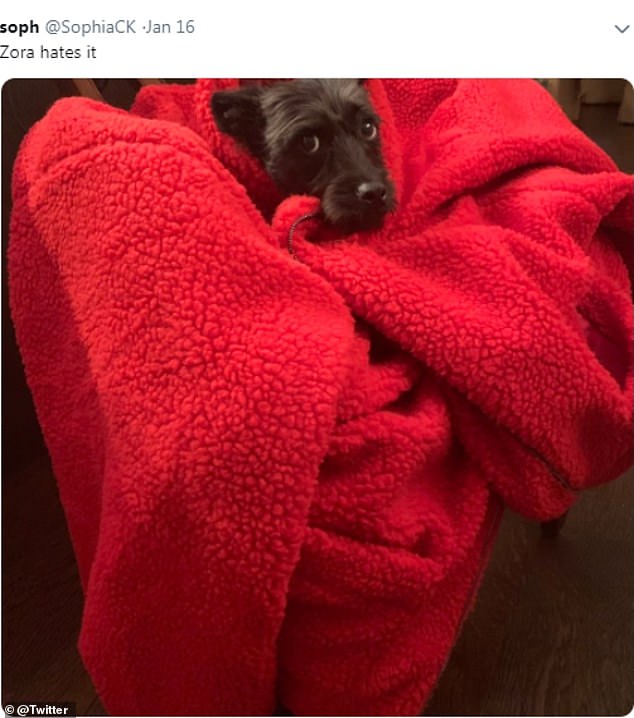 She shopper ordered an oversized £60 red coat expecting expecting a statement piece for winter. But the garment she received was so large it left her drowning in fabric, pictured

Writing another hilarious post, Sophia said she just wanted to ‘talk’ to the designer so see what they were thinking when they designed the item

Twitter user @SophiaCK ordered an oversized £60 red coat expecting expecting a statement piece for winter. But when she received the garment it appeared to be at least three times too big, drowning her in fabric.

She shared a hilarious side-by-side comparison of herself in the coat alongside the model in the coat with the tweet: ‘The very rare occasion when the plus size item you ordered online is way bigger than expected,’ later adding: ‘Who wore it better?’

And the responses were just as witty, with one person writing, ‘Great way to sneak snacks into the cinema,’ while another jokingly added: ‘Don’t you dare send this rare piece of haute couture back.’

Sophie later followed up with two more photos, adding a funny tweet: ‘Who was the designer who thinks fat people’s bodies are just expanded out from thin peoples in a way that would make this collar and these sleeves make sense. I just want to talk.’ 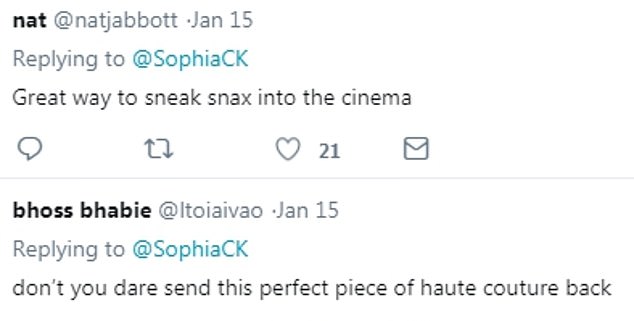 Twitter users were quick to offer their playful takes on the jacket, with one saying it could be a re-purposed Elmo costume

Twitter users were quick to suggest playful takes on the jacket.

‘I feel like they just repurposed those Elmo costumes from amusement parks,’ wrote one, while someone else penned, ‘It also looks like it could be used as a robe/towel .’

Another added: ‘Girl that looks cozy as hell though! I want to zip it up and snuggle in there with you!’ while one more commented: ‘Those sleeves! You could get an entire chicken in one of those pockets, should you need to.’

The mini dress that fell below the knees

Megan Leese, from Glasgow, asked the retailer to ‘reevaluate’ what a size four was after an oversized asymmetric blazer dress arrived and was so big it past her knees 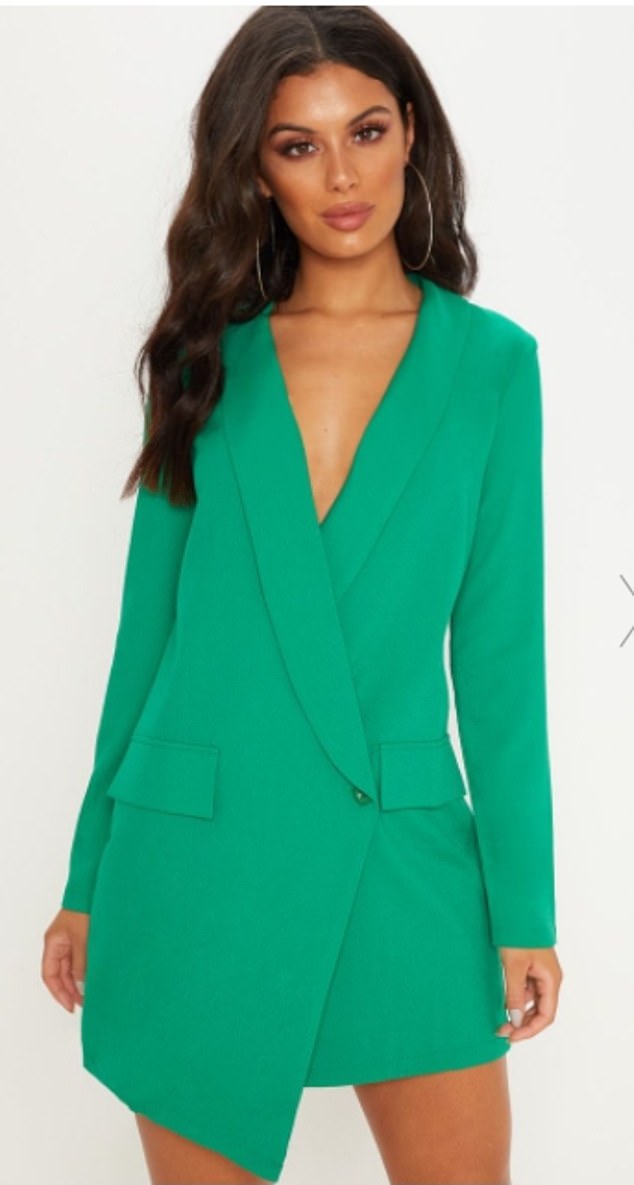 Shopper Megan Leese, from Glasgow, asked the retailer to ‘reevaluate’ its sizes after a mini blazer dress bought in her regular size 4 fell well below her knees and barely covered her breasts.

The advert of the £50 dress online is shown as just skimming the model’s thighs, with a V-neck that shows just a glimpse of cleavage.

Indeed the trousers were so long they came up far past the models chest, despite being advertised as being snug around the model’s waist online. 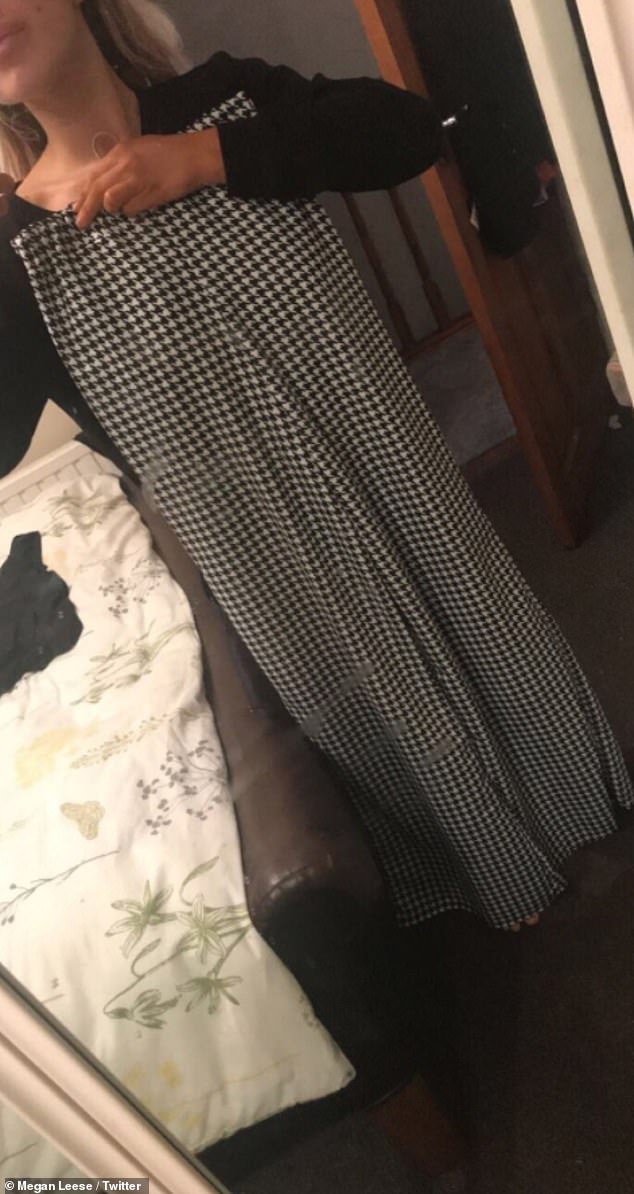 Megan also ordered a monochrome dog tooth wide leg trouser, that were so big they reached her chest 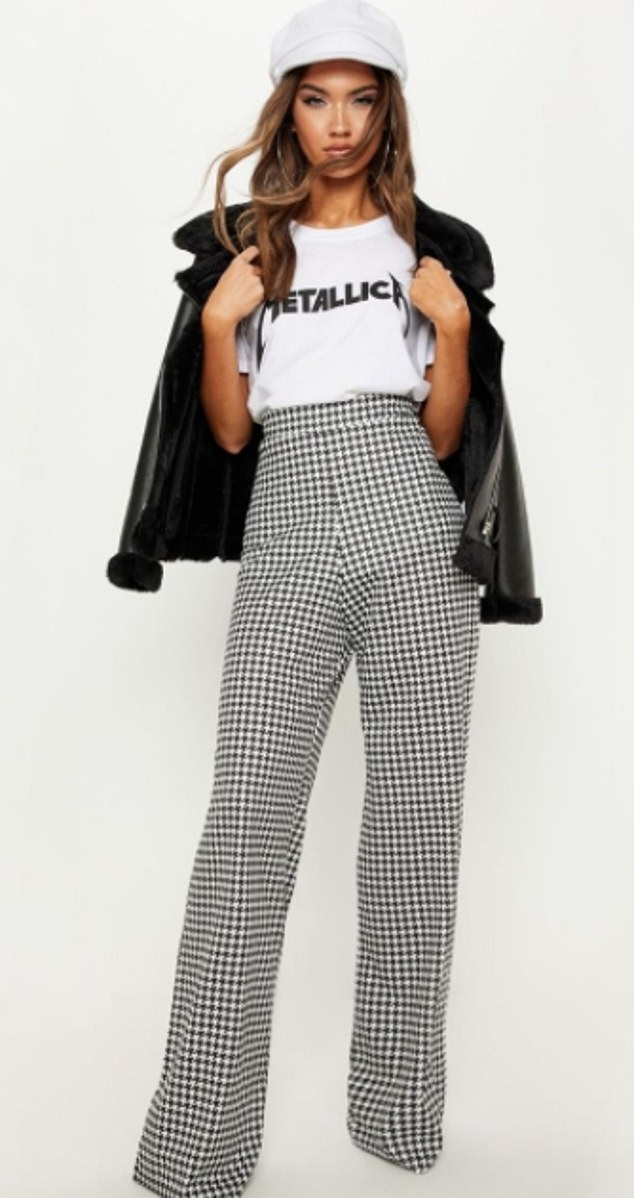 The trousers, advertised for £20, are shown online as snug around the model’s waist and draping down to her feet – nothing like they appeared on arrival

The jumpers with sleeves down to the knees

Two shoppers have been recently caught out when they ordered jumpers with sleeves so long they stretched down to their knees.

Lauren Tomlinson, 20, shared an image online of herself in the £20 stone loose knit oversized jumper from the online retail giant in a size small.

A picture advertising the garment online shows the loose-fit number still clinging to the model’s body, with the sleeves stopping at her wrists.

However, Lauren from Cambridge found the jumper fit very differently, as she was completely engulfed by the beige number.

Lauren Tomlinson, 20, asked PrettyLittleThing ‘who’s arms are that long’ as she  shared an image online of herself in the £20 oversized jumper from the online retail giant in a size small 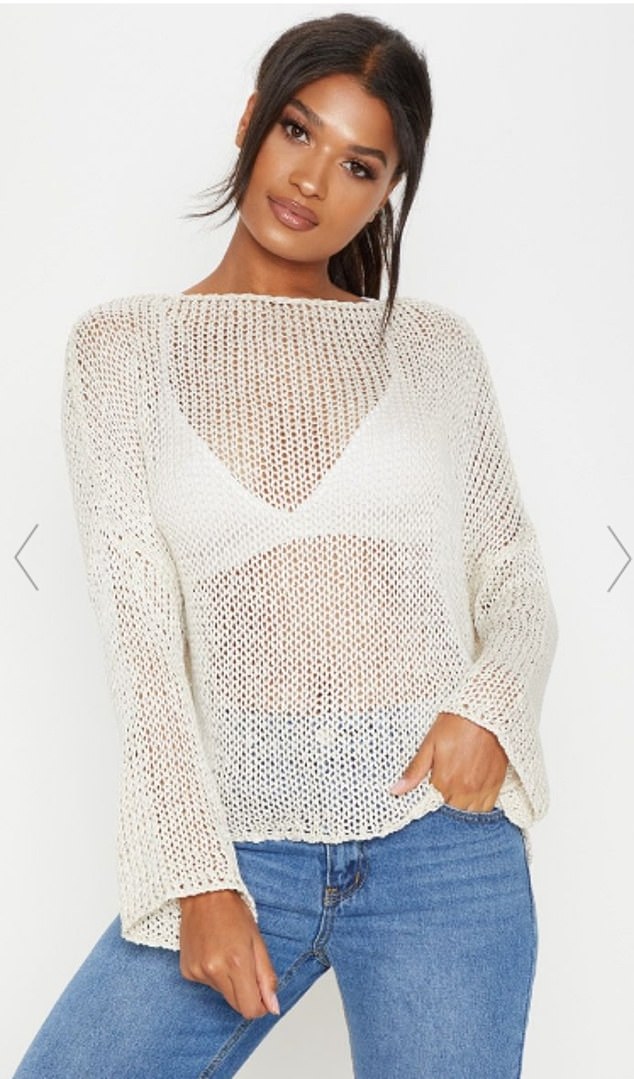 Lauren took to social media to describe her experience with the retailer and insisted she ordered the same size as the model, but it completely engulfed her

Posting a side-by-side picture with the image online, she wrote: ‘@OfficialPLT are you having a laugh? Small Oversized same size as the model. Who has that long arms?’

A second shopper had a similar experience.

Carla Ryan, 21, from Dublin ,accused the brand of ‘scamming’ after she bought a €28 (£24.80) pink oversized colourblock jumper.

But on arrival Carla discovered the sleeves of the knit completely enveloped her, and while the body of the jumper stopped at her waist, the sleeves went past her knees. 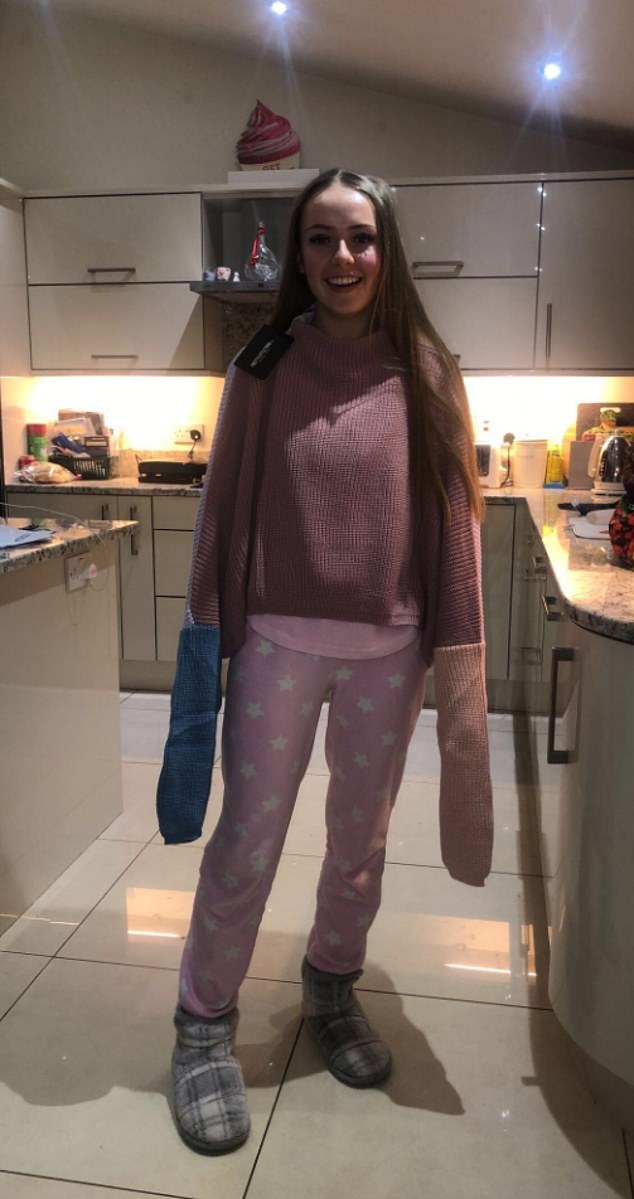 Carla Ryan, 21, from Dublin accused the brand of ‘scamming’ after she bought a €28 jumper from the retailer 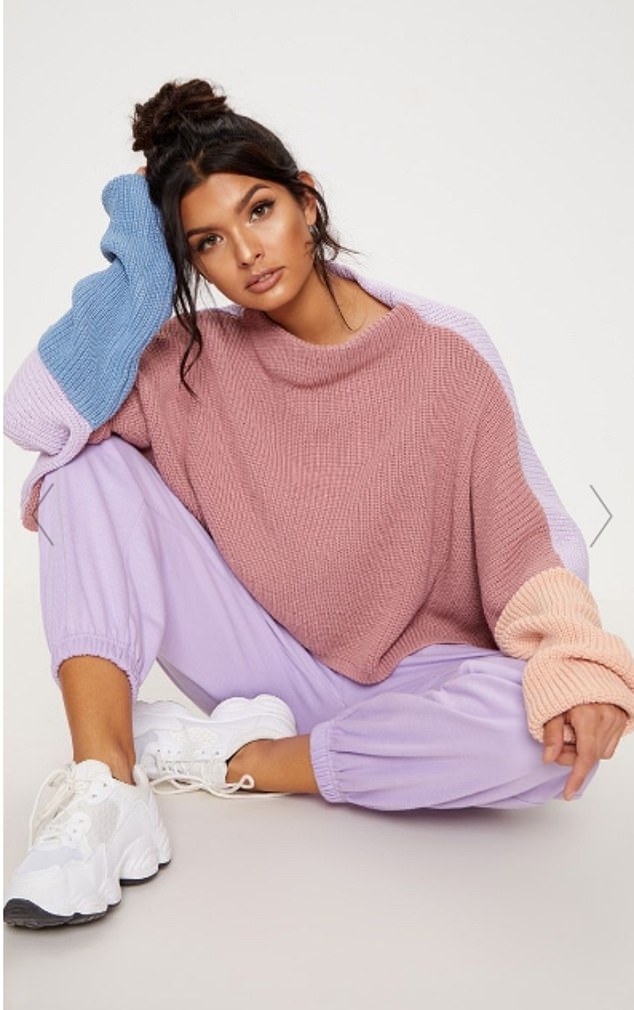 Referencing the many times PrettyLittleThing has experienced sizing fails, she wrote ‘OfficialPLT scamming us all again’

‘@OfficialPLT scamming us all again’ she wrote as she shared side-by-side images of the model and herself.

The item’s description reads: ‘Can’t decide on a colour? No problem, rock this colourblock jumper and wear them all. Featuring a pink, blue and lilac knitted fabric in an oversized style. Team this with more pastels for a totally on-trend look that will get you noticed.

PrettyLittleThing has reached out to both Lauren and Carla, and Femail have contacted all three parties for further comment.