Woman reveals her husband wants to quit his £60,000 job he ‘hates’ and live off her inheritance while setting up his own business – but is branded ‘selfish’ for wanting him to stay because she’s ‘terrified’ of losing their lifestyle

A stay-at-home mother has revealed she’s ‘terrified’ of her husband leaving his lucrative career while he lives off her inheritance and sets up his own business because she doesn’t want their lifestyle to change.

Posting anonymously on the UK parenting website Mumsnet, she explained her husband wants to quit his £60,000 a year job because he feels undervalued and sometimes comes home in tears because of how badly he is treated.

The former sales assistant said his salary covers all their expenses and she hasn’t worked since the birth of their daughter around five years ago, because the cost of childcare meant it didn’t make sense.

Revealing that she doesn’t want her husband to live off her £55,000 inheritance until he sets up his own business, she wrote: ‘Am I being unreasonable to encourage him to stay in a job he hates? I feel awful but it pays for our house and for our daughter to have a nice home and life.’

Fellow users were quick to offer their advice, with many arguing she should prioritise her husband’s mental health over their current lifestyle, although some argued that he should not use up their nest egg while branching out on his own. 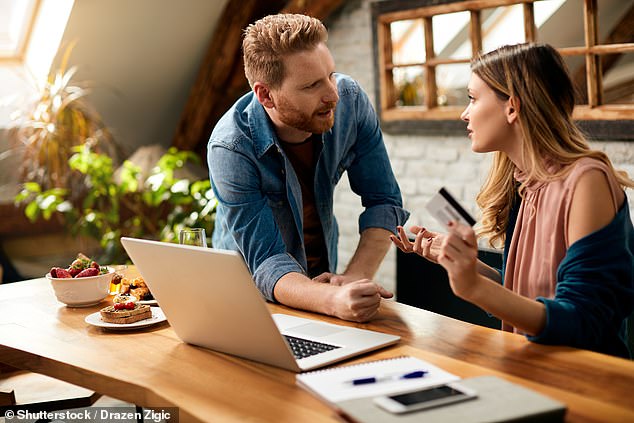 An anonymous woman revealed her husband wants to leave his £60,000 a year job and live off her inheritance until he can set up his own business (file image)

The woman penned a lengthy post explaining her concerns and admitting she enjoys being a stay-at-home mother.

‘I’m fine with it, I’ve been able to spend time with my daugher and I breastfed round the clock for three years, and also I was able to look after my mother when she was dying of cancer. Also me taking responsibility for house and child has freed up my husband to focus on work and get promoted,’ she wrote.

‘However, he’s having a hard time at work. He feels undervalued, the company owner speaks to him like c**p, he gets given all the work but no say in anything while others swan around doing nothing and making all the decisions.

‘He’s angry and fed up because he’s doing a large part of running the business but still being overlooked and given no authority. Also he’s being prevented from doing anything that could boost his professional profile, such as writing for trade magazines or giving talks at conferences, or doing additional training. Perhaps to keep him in his place?’

The woman explained her husband often comes home from work crying and wants to live off the £55,000 sale of her mother’s house until he can set up his own business.

She continued: ‘I think he’s nuts to give up a £60,000 salary. I can only dream of earning that much. If his business fails he’s unlikely to get another job on a similar salary. I can go back to work because our daughter is due to start school but I’ll only get minimum wage and I’ll be working reduced hours to fit around childcare, so I won’t earn enough to support the family. I’m terrified of what will happen if  his business fails.’ 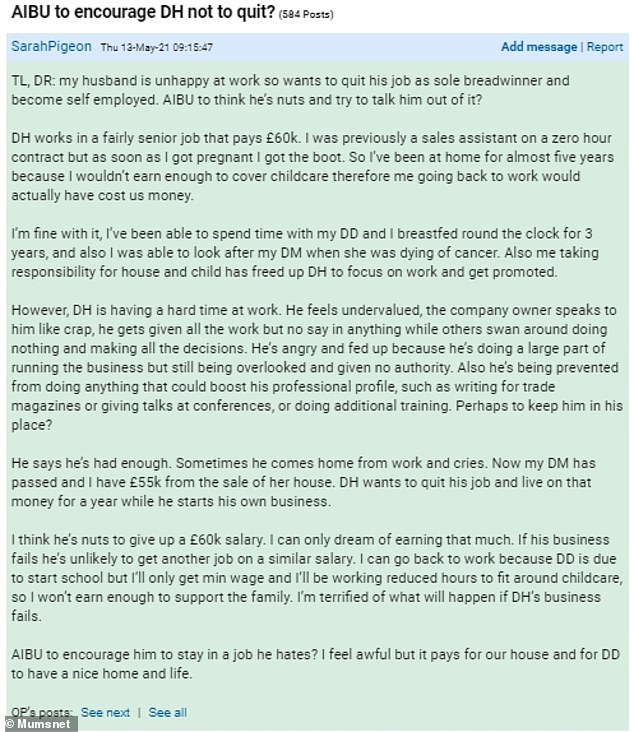 Posting on Mumsnet, the stay-at-home mother explained her husband has been coming home crying because he feels ‘undervalued’ in his current company

A stream of responses accused the woman of being ‘selfish’ as they argued she shouldn’t ignore her husband’s deteriorating mental health.

One person wrote: ‘Your husband is clearly desperately unhappy. You cannot seriously want him to stay in a job where he is breaking down in tears in the evening. Help him set up his business and see how it goes for six months.’

Another said: ‘You sound selfish and uncaring. You have a life that suits you while your poor husband is suffering harassment and discrimination at work. His plan is a good one and as a team you should offer to support him with the inheritance money to see how his self employment goes. You will get an indication within six months.’

A third added: ‘Your husband cries when he gets home and you’re more worried about keeping a certain lifestyle? I’m sure your daughter would want happy dad over money.’

Explaining that her own husband was in a similar situation, the commenter said she’d ‘instantly told him to quit’.

‘Yes s we struggled for a bit but now he’s in a job he loves. It shouldn’t even be a question. I feel sad for your husband.’

However, others agreed with the wife and argued there are other options her husband could try before becoming reliant on their inheritance.

‘I’d be telling him to take a step back at work, start saying no and stop pressuring himself to get the jobs done and see what happens. No way would I give up that nest egg for him to live on.

‘He either needs to work part time and his business part time and see if it takes off or stay where he is. That £55,000 shouldn’t be touched,’ one wrote.

Another said: ‘I really don’t think he should be living off your inheritance while he sets up a business – hardly guaranteed to succeed and that inheritance should be a nest egg’

A third commented: ‘I think he’d be mad to move without some long-term source of income in place. Can he start looking for a job with shorter hours so that he and you can begin working on his new venture together in the time freed up? He could then leave if the new business takes off. I agree that it makes sense for you also to start working.’

Suffering from burnout? Here’s why you should try the 42% rule

Woman raises squirrel as a pet, keeping it in her cleavage for warmth