A professional audiobook narrator has taken to TkTok to shame the sexist way male authors write about women.

The extracts she picks highlight the sexist and condescending way men write about women and their bodies, from comparing breasts to fish, or making disparaging comments about the ‘delectable’ young daughters of ‘fat women.’

In one video she quoted Ben Aaronovitch’s 2011 novel Rivers of London, where the author mocked a ‘plump’ woman with a cheerful voice, saying she had to ‘develop a good personality because the alternative is suicide.’

Kimberly, an award-nominated SAG-AFTRA audiobook narrator, told Femail she started the series by chance in February, and has been inundated with requests from other women outing the problematic extracts written by men. 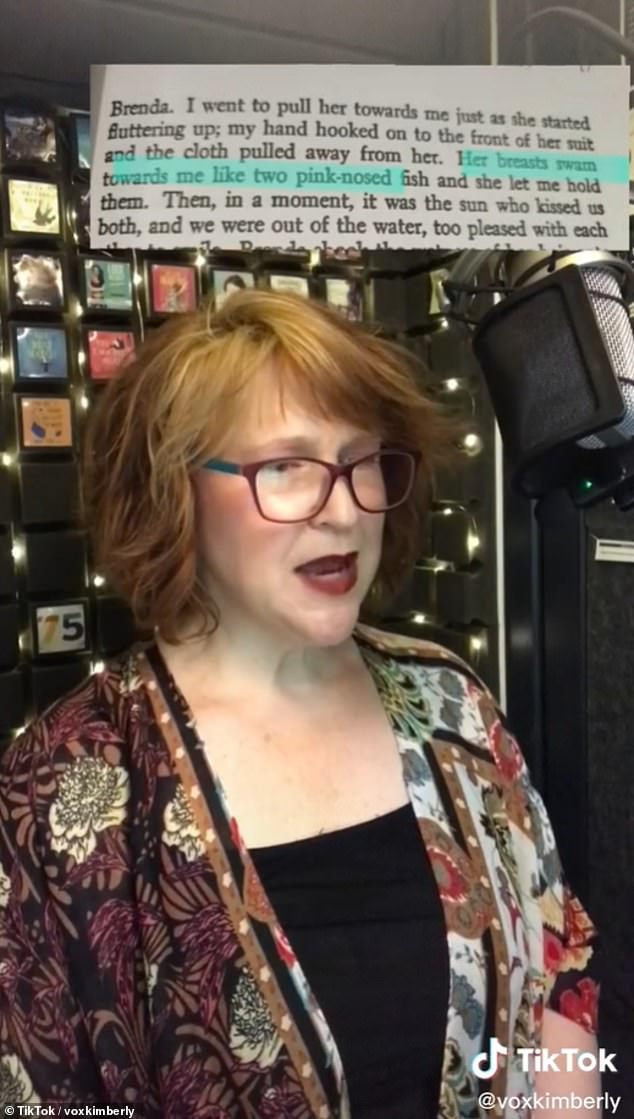 ‘Teenage daughters of these fat women are always utterly delectable’: The most outrageous examples of how male authors write about women

‘Her breasts swam towards me like two pink-nosed fish and she let me hold them.’ – Goodbye, Columbus, Philip Roth, 1959

‘The voice belonged to a plump, round-faced woman of the sort that develops a good personality because the alternative is suicide.’ – Rivers of London, Ben Aaronovitch, 2011

‘Behind me a handsome Spanish woman sat at the wheel of an open-topped Mercedes, remaking her lipstick over a strong mouth designed for any activity other than eating. Intrigued by her lazy sxual confidence, I smiled as she fingered her mascara and lightly brushes the undersides of her eyelashes like an indolent lover. Who was she – a nightclub cashier, a property tycoon’s mistress, or a local prostitute returning to La Linea with a fresh stock of condoms and sex aids?’ – Cocaine Night,  J. G. Ballard, 1996

‘Her body was not particularly fit-looking but seemed blessedly free of cellulite. Shaved legs. A conservative and recent bikini wax. More bruises had risen to the surface, but they didn’t conceal the fact that she was not possessed of an especially sexy body. I think I could do better, she thought. I won’t be able to hit the level of Hot, but I might be able to manage Cute. If I have a big enough budget. Or at least some makeup to work with.’ – The Rook, David O’Malley, 2012

‘I will say this, however – and it’s a strange, strange thing – the teenaged daughters of these fat women are always utterly delectable, as soft and gloriously rounded and naturally fresh-smelling as a basket of fruit. I don’t know what it is that happens to them, but it must be awful to marry one of those nubile cuties knowing that there is a time bomb ticking away in her that will at some unknown date make her bloat out into something huge and grotesque, presumably all of a sudden and without much notice, like a self-inflating raft from with the pin has been yanked.’ – The Lost Continent, Bill Bryson, 1989

‘The newcomers sat down where they could observe a girl approximately seventeen years old as she crossed behind the bar on her way towards their table. She had curly, wind-tossed brown hair, melancholic yet self-confident brown eyes as round as ripe cherries, a neckline that swept into breasts sadistically oppressed by that white blouse those sizes too small, nipples that took their stand even when covered, and one of those waists git to grab to dance the tango with until the break of dawn or the last drop of wine has been drunk.’ – Burning Patience, Antonio Skármeta, 1985

‘Susan smiled at me, giving Molly the Female Once-Over – a process by which one woman creates a detailed profile of another woman based upon a million subtle details of clothing, jewelry, makeup, and body type, and then decides how much of a social threat she might be. Men have a parallel process, but it’s binary: Does he have beer?If yes, will he share with me?’ – Changes, Jim Butcher, 2010

In one recent video, she read an excerpt from Philip Roth’s 1959 novella Goodbye, Columbus, where the author describes a romantic scene between a man and a woman.

Describing the female character’s body, Roth compared her breasts to ‘two pink-nosed fish’ that were swimming towards his main character.

Meanwhile, in an extract from a travelogue from the 1980s, travel writer Bill Bryson’s talks at length about the ‘delectable’ daughters of fat women and jests it would be ‘awful to marry one of those nubile cuties knowing that there is a time bomb ticking away in her.’ 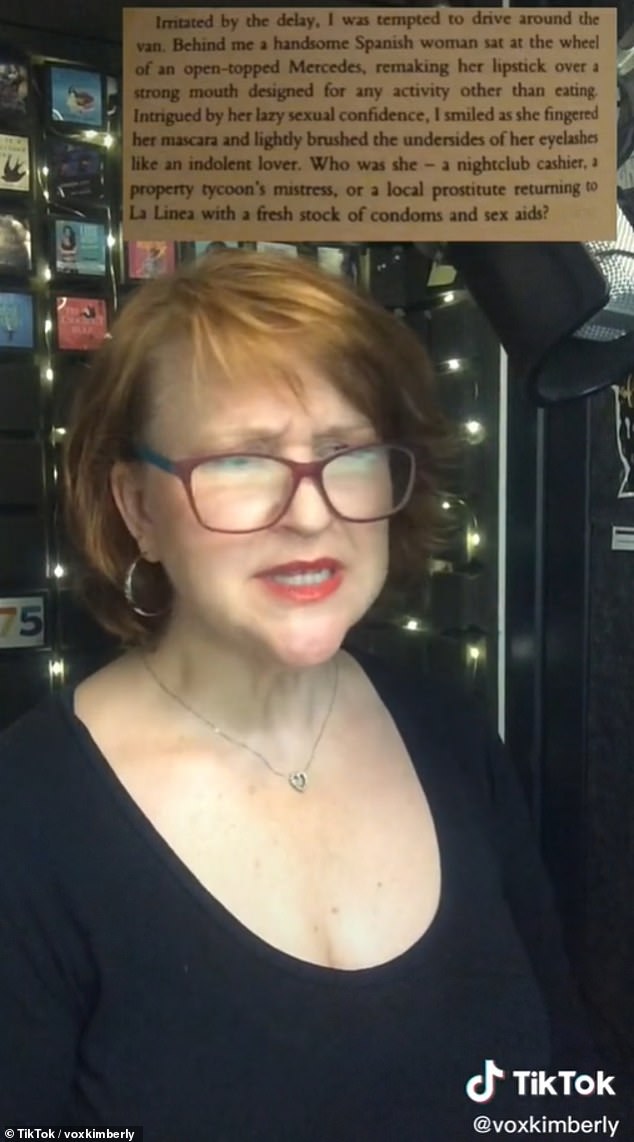 Kimberly also read an extract of J. G. Ballard’s Cocaine Night for her channel. In it, he describes a woman, saying she can only be a mistress, prostitute or a cashier 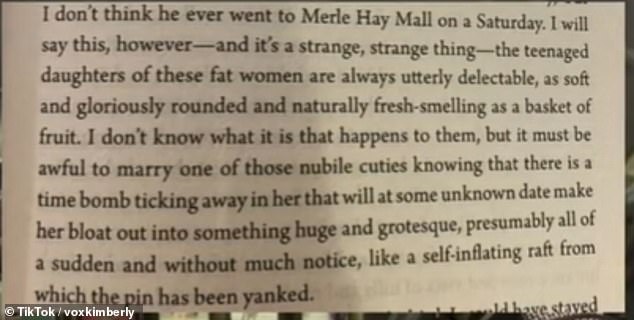 In his 1989 travelogue The Lost Continent, non fiction travel writer Bill Bryson despairs about what will happen to the ‘delectable’ bodies of the daughters of fan women

In another clip, the narrators reads an extract from Huraki Murakami where his character compares the body of his lover to the body of a ’17-year-old.’

Kimberly, who has worked with Penguin Random House and MacMillan audio, said she’s been overwhelmed with requests and suggestions since joining TikTok in February and starting the series shortly thereafter.

‘I didn’t expect much more than my handful of narrating colleagues/followers to roll their eyes along with me at it, but in hindsight, I never should have underestimated the collective power of womens’ rage,’ she said. 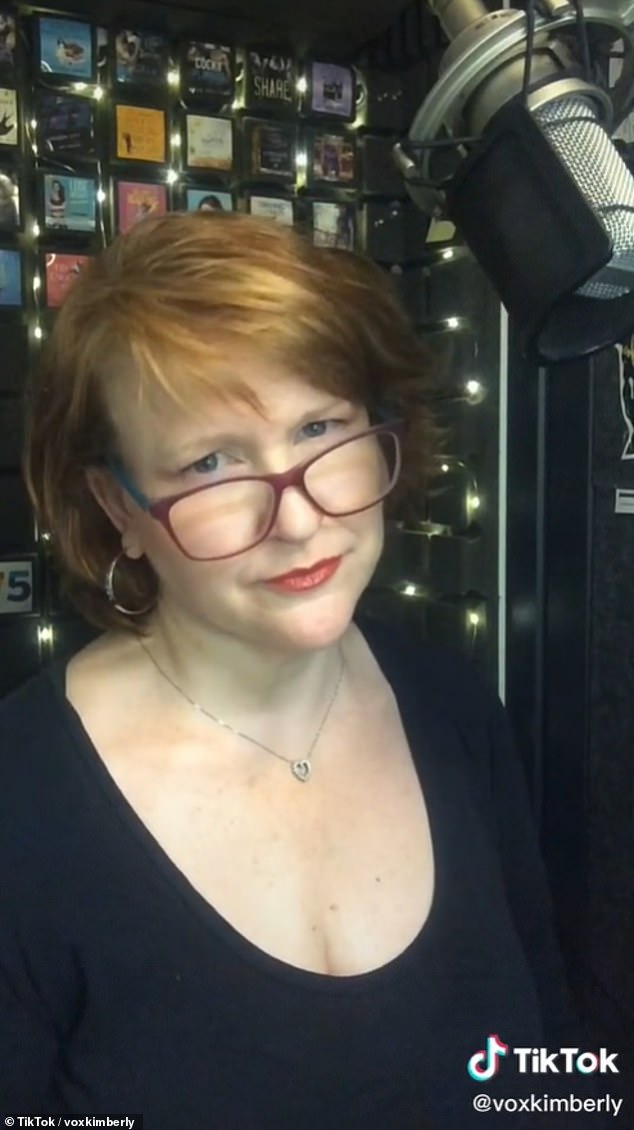 While she does not comment on the extracts she reads, Kimberly has perfected her ‘disappointed’ look for the camera

Among the authors who are commonly sent to Kimberly, Stephen King’s early work is a popular suggestions.

‘Stephen King has been the most frequent submission—which, I’m honestly a little judicious about using: one simply for repetitiveness, and two, because I respect him so much as an author and a human, and I think there’s been a lot of growth in what he’s written between the 1970s and today,’ she said.

‘Philip K. Dick and Ben Aaronovitch have been overwhelming popular,’ she added.

‘Her body was not particularly fit-looking but seemed blessedly free of cellulite. Shaved legs. A conservative and recent bikini wax. More bruises had risen to the surface, but they didn’t conceal the fact that she was not possessed of an especially sexy body. I think I could do better, she thought. I won’t be able to hit the level of Hot, but I might be able to manage Cute. If I have a big enough budget. Or at least some makeup to work with.’ 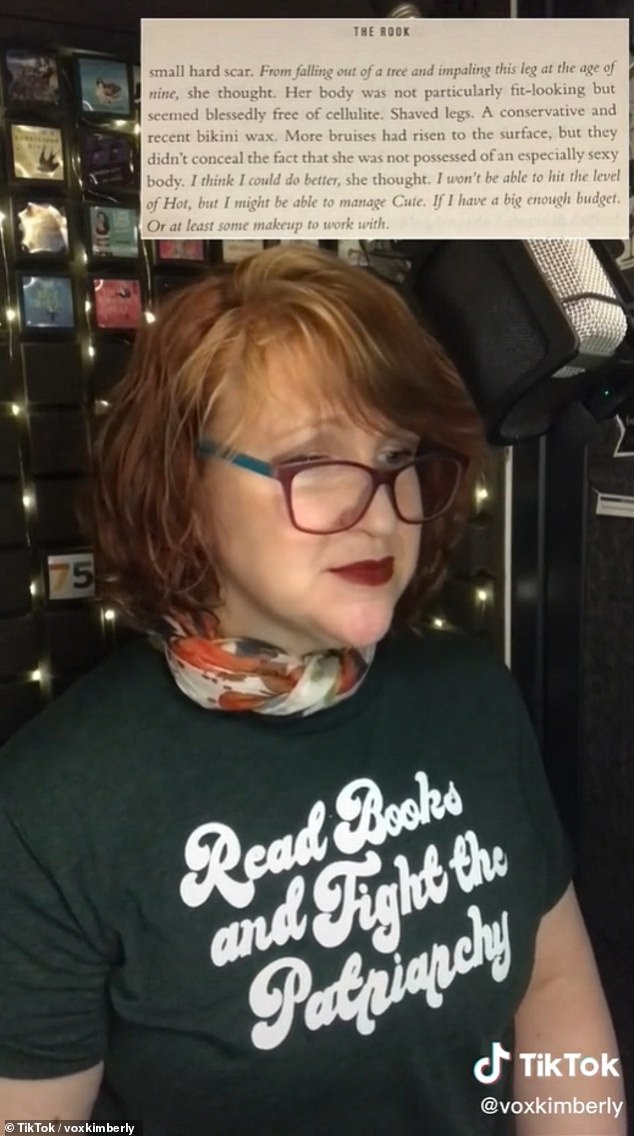 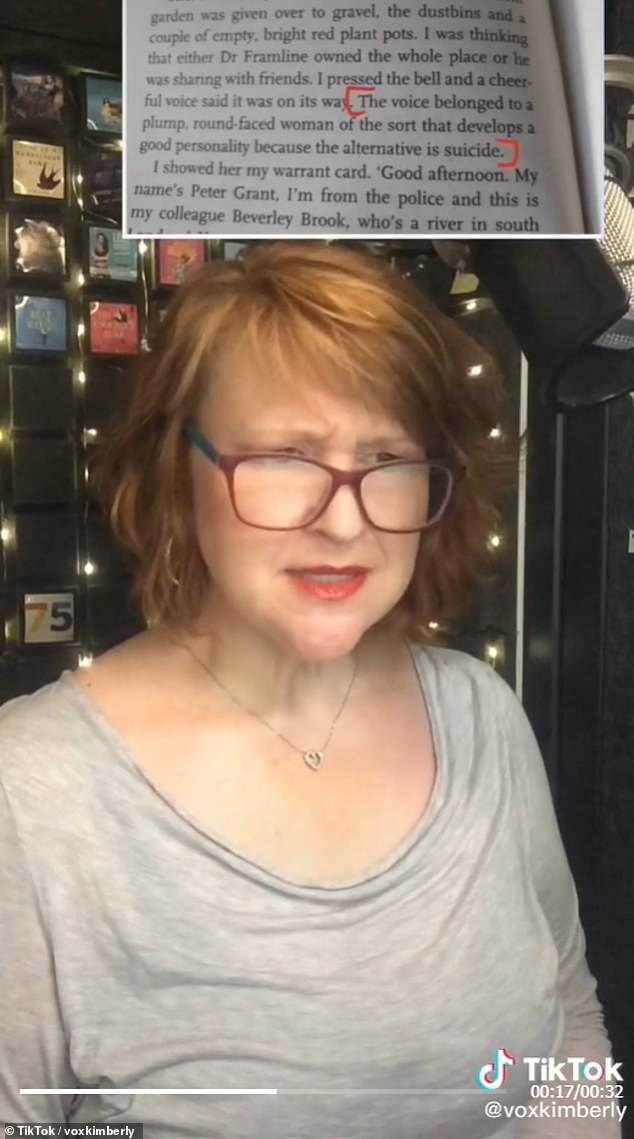 In one video she quoted Ben Aaronovitch’s 2011 novel Rivers of London, where the author mocked a woman with a cheerful voice, saying she had to ‘develop a good personality because the alternative is suicide’

She said it might have to do with the fact she sticks to reading what’s on the page and gives very little commentary.

‘I always include a photo of the text I am narrating, to quell any argument that this material does actually exist,’ she said. 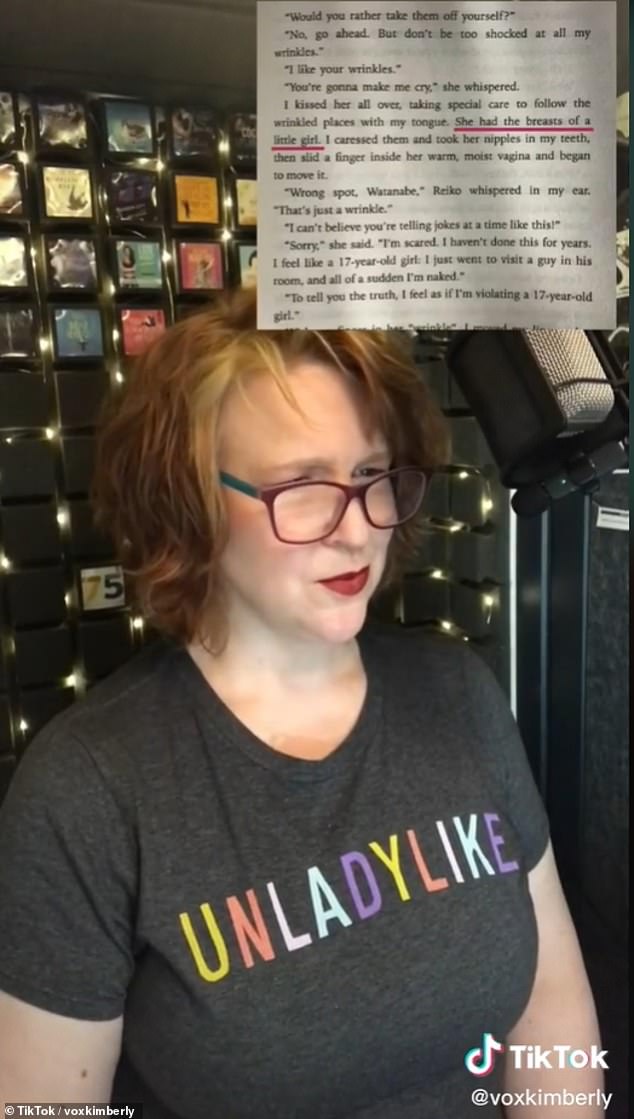 In this extract from Haruki Murakami’s Norwegian wood, tje popular Japanese writer pens that a female character has the breast of a little girl

‘I simply name the author and the title and read what’s written, as honestly and as faithfully to the selection as I can, as if I were being paid to narrate that audiobook.’

The narrator added that she deletes ay ‘vitriolic’ comments she receives because the book extracts she reads for the series are ‘bad enough.’

But she admits that it would be possible for a man to answer her channel with a similar series of their own where they real extracts of novels written by women about men.

‘Turnaround is fair play—I’ve got no problem with that. But I will bet dollars to donuts that they run out of material sooner than I do,’ she added. 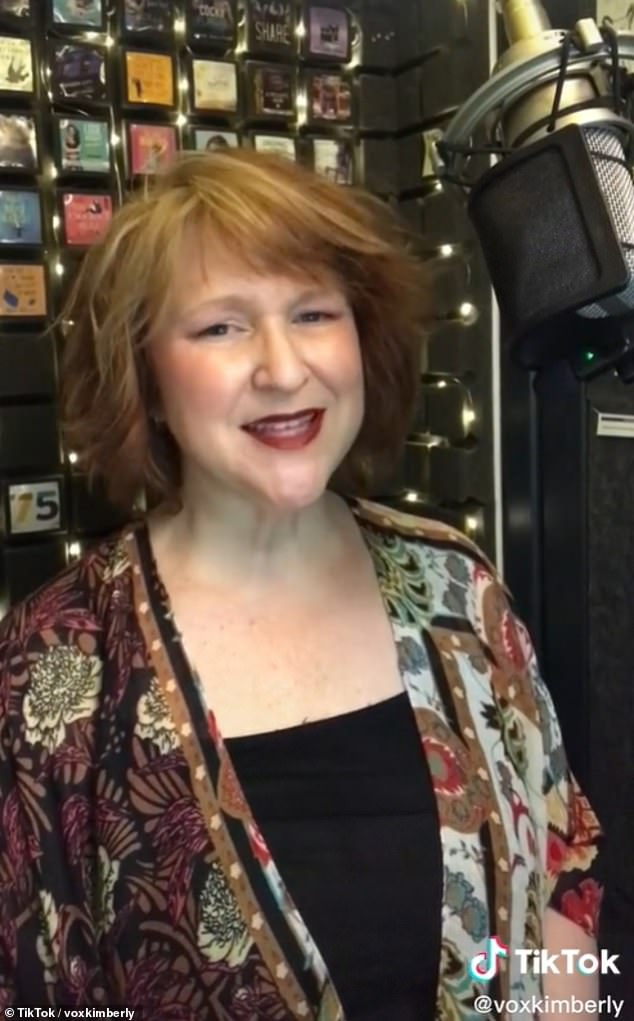