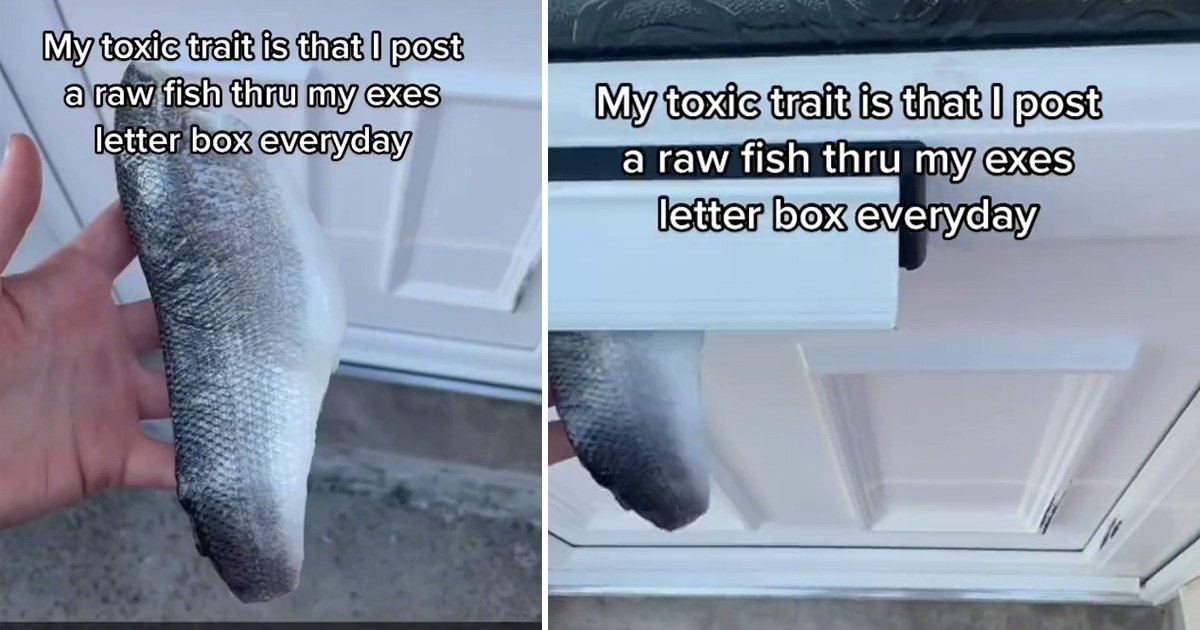 We’ve all done things we regret during or after breakups, from saying nasty things in anger to the movie-montage favourite of cutting up of their clothes.

Not many can say they’ve taken their desire for revenge this far, though, as one woman shared how she gets back at her ex in a very specific way.

On TikTok, a user named Katie Beresford (@katieber5) posted a video captioned: ‘My toxic trait is that I post a raw fish through my ex’s letterbox every day’.

Sure enough, the video itself shows Katie walking up to a door with a fillet and popping it through the slot before casually walking away.

Katie’s TikTok has been viewed over four million times, and has sparked debate among those who think she’s in the wrong for her antics.

One commenter wrote: ‘But like, is it his place? Or his parents? Not cool to do that to then assuming it’s the latter.”

Another said, ‘So your obsessed with them still,’ while a third simple commented, ‘Heal.’

Others did see the funny side, with one writing: ‘The dog sitting on the other side of the door everyday waiting for the magical fish.’

Plenty more also tagged mates suggesting they get their own enemies back using the fishy method.

As it turned out, Katie was playing a prank on all of us rather than acting as a scorned lover. She added in a later comment: ‘People that think I actually do this every day and it was actually my exes house.’

She clarified that the recipient of the fillet was a ‘random house’ and she only ‘did it once’. Not sure if that makes it better or worse, but there we are.

One thing’s for sure, it seems to have given millions of people ideas for getting even. If you wake up to a sea creature on your doorstep any time soon, you’ll know who to thank.