The world hit another carbon dioxide emissions milestone in 2018, with an estimated 2.7 percent increase in emissions since last year, according to a report published Wednesday in Environmental Research Letters, a scientific journal. This follows an increase of 1.6 percent in 2017 from 2016.

The Global Carbon Project, an organization that produced the report, estimates that global CO2 emissions from fossil fuel sources will hit a record high of more than 37 billion tons this year.

Just two years ago, there was cause for cautious optimism. From 2014 to 2016, world emissions seemed to be stabilizing.

“We thought, perhaps hoped, emissions had peaked a few years ago,” Rob Jackson, a professor at Stanford’s School of Earth, Energy & Environmental Sciences and leader of the Global Carbon Project, said in a news release. “After two years of renewed growth, that was wishful thinking.”

The Global Carbon Project report estimates that CO2 emissions in the U.S. alone ticked up 2.5 percent since last year partly due to extreme heat, as well as cold and the use of oil associated with it. U.S. emissions make up 15 percent of the global output.

The U.S., however, is not the biggest emitter. With a population four times greater than the U.S., that distinction goes to China, producing 27 percent of global emissions. Their contribution also grew 4.5 percent in 2018 compared to last year due to continued construction and economic growth.

The published findings come on the heels of a UN Emissions Gap Report released last week. The “emissions gap” is the difference between fossil fuel emissions reduction pledges made by the nearly 200 countries that signed the 2015 Paris Agreement and where the actual emissions trajectory stands today. Emissions act as a heat-trapping greenhouse gas blanket, warming the globe.

The UN report illustrates a widening chasm between reality and the international community’s stated goal of limiting global warming to “well below the 2 degrees Celsius,” or 3.6 degrees Fahrenheit. That temperature increase is measured from 1850.

The UN report highlights the disconnect between need and action, concluding that nations must triple their efforts to stay below 2 degrees Celsius. To stay below a more ambitious goal of less than 1.5 degrees Celsius of warming, we’d need five times as much effort.

According to NASA, atmospheric concentrations of carbon dioxide are the highest they’ve been in 2 to 3 million years. For the past 800,000 years, CO2 levels have stayed near or below 280 parts per million. Just in the last 150 years, levels have jumped 45 percent due mainly to the burning of fossil fuels.

Meanwhile, Earth continues to shatter warming records. A few days ago, the World Meteorological Organization (WMO), an intergovernmental organization, put out a statement saying the 20 warmest years on record have all been in the past 22 years, with the top four in the past four years.

Since the 1800s, the world has warmed close to 2 degrees Fahrenheit. Climate scientists conclude that nearly 100 percent of the warming is due to humans.

“It is worth repeating once again that we are the first generation to fully understand climate change and the last generation to be able to do something about it,” said World Meteorological Organization Secretary-General Petteri Taalas. 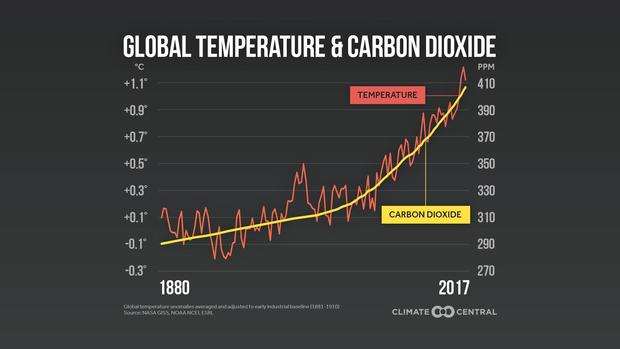 In the last decade, from 2007 to 2017, there has been some reason for optimism in the U.S., as emissions decreased by 13.5 percent over that period, according to Jackson, the Stanford professor. The decrease was due to progress in energy efficiency and gains in sustainable energy. The U.S. also has the greatest potential to reduce energy consumption with efficiency, since the U.S. has the highest rate of energy use per person — two times that of Europe.

But at a time when the world’s scientists are shouting desperate warnings, Americans’ habits still seem to be going in the opposite direction.

“We’re driving more miles in bigger cars, changes that are outpacing improvements in vehicle fuel efficiency,” Jackson said. “Overall, U.S. oil use is on track to rise by more than 1 percent this year compared to 2017.”

John Furlow, deputy director at the International Research Institute of Climate and Society at Columbia University, is frustrated by the U.S. abandonment of the Paris Agreement and lack of U.S. leadership on climate. Still, he holds out hope that the U.S. will be able to meet some its Paris commitments through mobilization of state, local and private action. He worries “it will not have the same impact as a concerted, coordinated national effort from a superpower.”

With a global population expected to spike to over 11 billion in 2100, stopping the emissions bulldozer is a Herculean task. A business-as-usual approach to climate change concerns Arturo Garcia-Costas, Environment Program Officer at New York Community Trust. He urges game-changing action.

“The time for minor tweaks to our civilization has passed,” he said. “We need to take bold steps and deploy new technologies that will transform the systems we depend upon to move, feed and protect our families from a changing world.”

That’s what the world is working on right now at COP24 in Katowice, Poland — an annual UN climate meeting with delegates from nearly all nations. Famous nature documentarian Sir David Attenborough opened the conference with a dire warning.

“Right now, we are facing a man-made disaster of global scale, our greatest threat in thousands of years,” he said. “If we don’t take action, the collapse of our civilizations and the extinction of much of the natural world is on the horizon.”

‘Conjuring: The Devil Made Me Do It’ Summons Demons and Real-Life Murder Case in First Trailer