Home » Lifestyle » Would you pay a pet therapist if your cat was feline down?

Would you pay a pet therapist a small paw-tune if your cat was feline down? The RSPCA warns moggies are suffering a wave of anxiety

Six o’clock on a Sunday evening and it’s time for therapy. I open my laptop, log into Zoom and scatter chicken treats on to the desk.

My cat Coco starts nibbling her way through them until she ends up in front of the laptop, where cat behaviourist Anita Kelsey is waiting. Coco miaows at the screen and Anita smiles patiently. Cat therapy has officially begun.

I’d never expected to find myself having a ‘therapy session’ with my cat. Before I had Coco, I would have laughed at people hiring therapists for their precious pets. But when my eight-month-old domestic kitten started exhibiting signs of aggression and anxiety in lockdown, I decided it was time for professional help.

Ever since Coco was badly frightened by a neighbour’s cat in the garden, she’s become noticeably less affectionate and more aggressive. Instead of miaowing for chin rubs like she used to, she’s begun biting and scratching me. 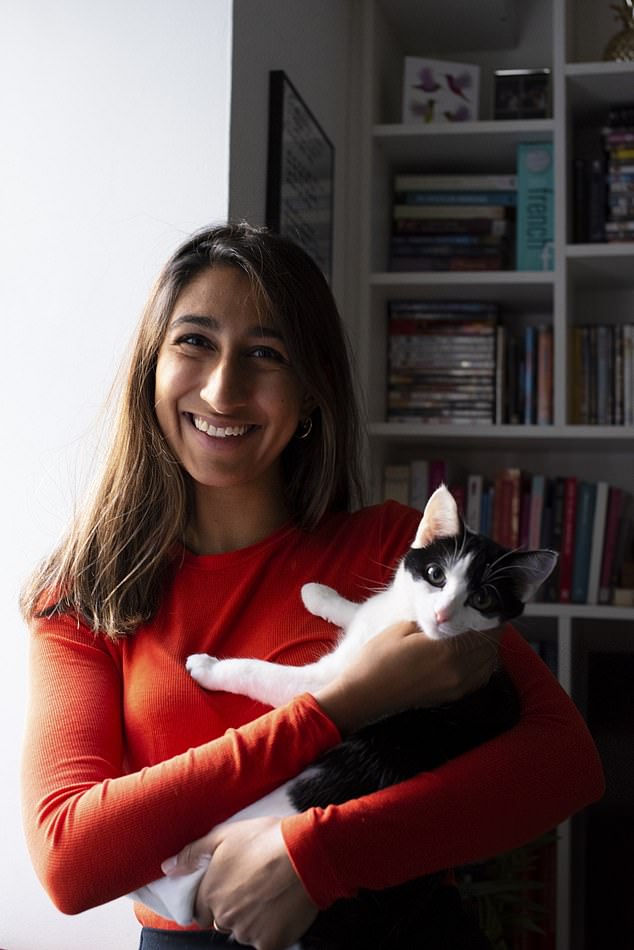 Since we’re stuck in the house together — I’m isolating alone — it’s become a pressing problem for both of us. The RSPCA also recently warned that cats will need to be weaned off the extra human contact they’ve become used to while we’re all at home.

So I started looking for an expert. Cat behaviourists are professionals who help owners understand any feline mannerisms that are worrying or difficult to handle. They’re typically accredited by the Association of Pet Behaviour Counsellors (APBC) and charge from £350 to well into the high hundreds for a course of sessions.

Anita, author of Claws: Confessions Of A Professional Cat Groomer, has noticed a continuing increase in clients. ‘I think people are more aware of our existence, and there’s less stigma about hiring a “pet shrink” nowadays,’ she says.

We tend to think of cats as mysterious creatures, moved by their own whims, but Anita insists it’s perfectly possible to decipher what they’re trying to say.

‘Cat language’ can be understood by observing their body posturing and interpreting the various behaviours owners are confronted with. Additionally, we need to look at their environment and what they experience daily. 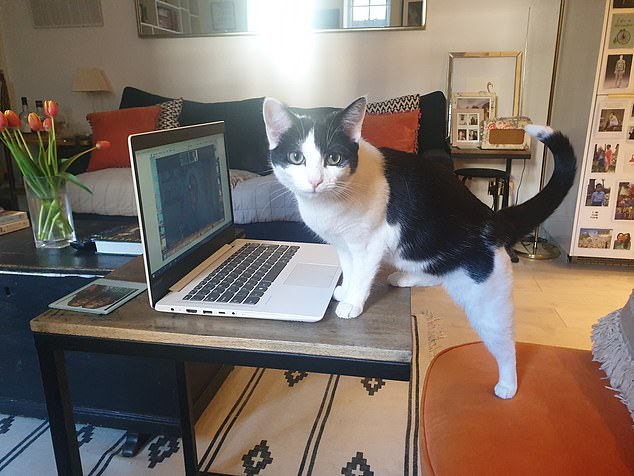 Anita watches on Zoom as Radhika handles and plays with Coco. She gives advice on how to make Coco more comfortable

‘With all three factors — and taking into account the cat’s personality — a behaviourist will be able to see the problem, explain why it’s happening and put a plan together to change the behaviour,’ says Anita.

The first step was an 11-page consultation form, including questions on everything, from my cat’s litter box habits (very good), to her personality (sweet, sassy and spoiled) and, finally, the problem behaviour.

Anita’s seen problems like Coco’s before. ‘When a cat has been scared by something, they’ll direct that on to you,’ she says. ‘It’s called redirected aggression. Normally it’s really aggressive and you’ll get hurt. Your situation sounds more like she’s just frustrated by what happened. Just give her time, reassure her, and play with her. Allow her to work through the fact she’s upset.’

Cat behaviourists typically pay house visits, but that’s not an option at the moment. Instead, Anita watches on Zoom as I handle and play with Coco, giving advice on how to change the way I hold her so she’s more comfortable.

I never realised holding her vertically against my body could make her feel secure, while holding her horizontally in my arms could stress her out. 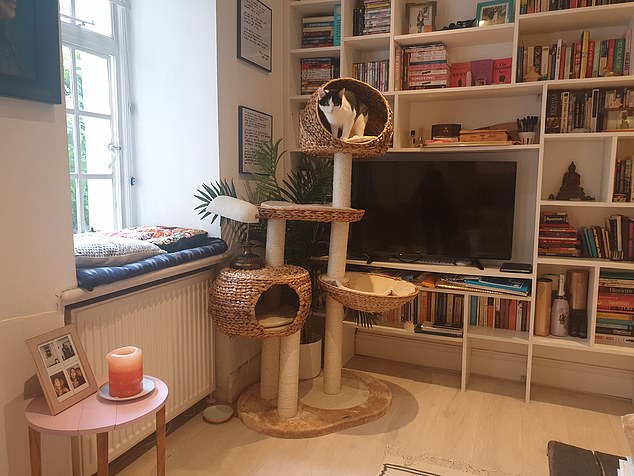 After just a couple of weeks with her new furniture, plus 20-minute play sessions each morning and evening, there’s a noticeable difference in Coco’s behaviour

Via WhatsApp, I send Anita videos of Coco playing with the new toys she’s recommended. Soon, we spot a secondary issue: Coco’s now not going out much because of the other cat, she’s bored and using me — primarily my feet — as a game, by attacking them.

‘It’s play aggression, and it’s quite common for indoor cats who are not getting enough stimulation,’ says Anita. ‘The cat’s bored, and starts to see your limbs as prey. As well as playing with her more, get a cat tree or shelves, so she’s not on the floor when you walk past. You just have to not care so much about your own furniture and aesthetics.’

I invest in a Karlie Paradise Banana-Leaf Cat Tree from Zooplus. At £149.99, it’s expensive, but the woven material works with my flat’s decor, while Coco loves the multiple hiding places. I also bought a Scandi-chic Chill cat shelf from Cosy and Dozy for £103. Drilled into my wall, it gives Coco a high vantage point to be able to survey her ‘realm’.

After just a couple of weeks with her new furniture, plus 20-minute play sessions each morning and evening, there’s a noticeable difference in Coco’s behaviour.

She’s less anxious and so busy playing on her cat tree that my feet no longer interest her. Best of all, she’s slowly trading in her scratches for cuddles again.

‘Often, the solutions to problematic cat behaviour are this simple. There’s a common assumption that cats aren’t loving and don’t have the kind of psyche that would respond to therapy, but with the help of an expert, they can be easy to understand,’ says Anita.

‘There’s no blanket rule, but just like humans, cats can range from being extremely affectionate to wanting space and less human contact. It just depends on the cat and their experiences with humans. Most of my cases require the humans to change their mindset or behaviour, and the territory to be modified. That results in a change in the cat’s behaviour.’

It’s something Amy Greer, 31, and her partner John Johnson, 35, are learning. The couple, who live in East London, moved in together last year, each bringing a cat — Lupa and Colin — with them. After three months of ‘hell’, with the cats constantly fighting, they hired a cat counsellor.

Eight months later, there’s been a huge improvement. ‘The cats now sleep most of the day in the same room — they have a massive cat tree with space for both of them,’ says Amy.

‘They still have occasional face-offs, but Lupa has gained confidence around Colin and he is much less keen to chase her. They aren’t best friends yet, but we’re working on it,’ she adds.

The solutions aren’t always so obvious. Accountant Paul Harris, 50, and his wife Chloe, 45, have used Anita’s services twice since introducing two Bengal crosses, siblings Ramesses and Kali, into their North London home. Most recently they had a Zoom session to stop Ramesses being so aggressive towards Kali and from urinating in the house.

‘Anita told us he was trying to claim territory as the dominant cat,’ says Paul. ‘Her advice was to use scent to rebalance things at home. As Ramesses sees me very much as his dad, we were advised to make Kali smell of me. So each morning, I wiped a cloth under my armpits then over her. It sounds awful, but it worked.’

Initially, Paul was against the idea of hiring a cat therapist. ‘I thought it was a bit mad. Some people laugh and can’t believe we did it. But if you have to live through your cats constantly fighting, it’s a different story.’

Over the past 18 months, he’s spent around £1,700 trying to resolve his cats’ issues — including buying a £1,000 cat tree from luxury brand Hicat — but he believes it’s worth it. ‘If it solves the cats’ problem and lasts for years, it’s not hugely expensive in the grand scheme of things,’ says Paul.

Cat therapy won’t be for everyone, but for me it’s been a life-saver. With Anita’s help, I’ve learned to give Coco the stimulation she needs, even if it’s meant turning my home into a cat’s paradise. My bank balance may have taken a hit, but when I see my once-anxious cat happily purring from her new shelf, I know it’s been worth every penny.