Home » Lifestyle » Yes, Michaela Coel’s I May Destroy You is that good

One of the most celebrated series of the year in the UK and US, Michaela Coel's I May Destroy You has arrived here with little fanfare, slipping quietly on to Foxtel's Binge streaming service. And the international excitement about it is warranted.

The audacious 12-part BBC/HBO production, which has been aptly described in New York magazine as "genre casual", is a melting pot of hot-button topics: gender, race, power, money, sex, sexual assault, social media – the whole damned thing. And it approaches them with a light touch that never appears didactic. It also tackles them from a range of angles, repeatedly turning in on itself and subverting expectations.

"Prior to being raped, I never took much notice of being a woman," says Coel's protagonist, Arabella, reading from the draft of a speech she's preparing to deliver at a writers' forum. "I was too busy being black and poor." 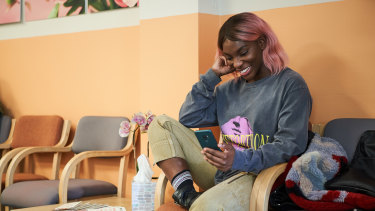 Michaela Coel in the landmark series she created, wrote and stars in.Credit:HBO/Foxtel

Coel's series, on which she's the creator, writer, executive producer, sometime co-director and star, is complicated, in a good way. Inspired by her own experience of sexual assault, it starts with a heady rush of energy, the opening half-hour propelling viewers into Arabella's world: as she's initially farewelling her lover, Biaggio (Marouane Zotti), in Italy and then plunging into her life in London.

She's a writer who's become Twitter-famous with her first book, Chronicles of a Fed-Up Millennial, which grew from a series of tweets. Now she has a publisher and a pressing deadline for the draft of her second. Which doesn't prevent her from heading out to party with her pals the night before it's due.

The first episode fizzes with information and detail. For viewers, there's an intoxicating sense of immersion into Arabella's life as flatmates, friends and fans asking for selfies are introduced. It's clear immediately that this is a drama being shaped by someone who knows how to tell a story, knows what story she wants to tell and intends to tell it her way. I May Destroy You announces its distinctive sensibility from the outset, and it's likely to be unlike anything you've seen before.

By the end of the first episode, Arabella's dawning realisation of an assault the previous night becomes uncomfortably insistent. An enthusiastic party girl, happy to snort a bump or three of cocaine and throw back the tequila shots, she's suddenly plagued by jarring flashbacks. There's a cracked screen on her phone and a cut on her forehead that she can't explain. Later comes news of an ATM withdrawal that she doesn't remember making. In fact, she realises, she has no memory of the previous night. 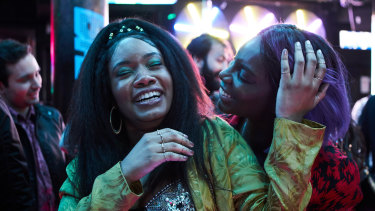 Terry (Weruche Opia) and Arabella (Michaela Coel) in I May Destroy You.Credit:HBO/Foxtel

I May Destroy You has been described as a study of sexual assault and its aftermath. It's also been labelled a "consent drama" as it examines the complicated nature of sexual consent and how it can become murky even in circumstances when it might initially be given. That aspect of the story develops to include not only Arabella but Terry (Weruche Opia), her closest friend since school, their friend Kwame (Paapa Essiedu) and, later, Theo (Harriet Webb), whom the girls also knew at school. All have sexual encounters that leave them hurt, puzzled or vengeful.

But such a description of the series is also unduly limited, because it's also about friendship and about the fact that people lie for a range of reasons. Like its protagonist, the series and its tone defy simple categorisation. It embraces ambiguity and that's built into its title.

Who, or what, is the "I"? Is it a wounded woman, filled with rage, seeking retribution and becoming an online avenger? Is it the man who spotted her in a bar, drunk, alone and vulnerable, who spiked her drink and then raped her in a toilet cubicle? Or could it refer to something else entirely, something less literal, like psychological damage, the tormented aftermath of sexual assault? Perhaps it's a destructive sense of guilt or shame? Like many aspects of this continually surprising series, the title is open to interpretation and there's a variety of options.

Playing Arabella, Coel is as nuanced and multi-faceted as her show. She's striking, magnetic to watch, and her character is impulsive, infuriating, irresponsible, sometimes insensitive, yet also sweet, tender and funny. She's also a blazingly good writer.

Never judgmental of its key characters, the series is sprinkled with bright jewels, scenes and encounters that sparkle at unexpected points: Biaggio spiriting Arabella into a gated beach to watch the sunrise over the sea; the depiction of Theo and her complicated motivations, revealed in flashback in episode six; an inspired and hilarious punchline for episode seven. 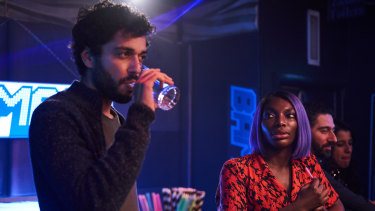 Biaggio (Marouane Zotti) and Arabella (Michaela Coel) in I May Destroy You.Credit:HBO/Foxtel

Coel's series can be elliptical and impressionistic; it's impossible to predict what the next episode might bring. And it's worth noting that she persuaded the BBC in the UK and HBO in the US to schedule it to appear weekly, so that its instalments could be appreciated individually, rather than having the series devoured in a big bingeing gulp. Foxtel, which will also screen it on Showcase later this year, has disregarded that request, offering the entire series and going for the potential boost brought by bingers over the creator's wishes.

So you can see it all at once and it's hard to stop watching once you start. There's a powerful urge to see where the next episode will take you. But try to adopt Coel's preferred approach and at least space it out and savour it. This series deserves that.

Vaporfly shoes will help me reach my marathon dream. Should I use them?

Yes, Kate Hudson Has a Thing for Musicians