Home » Lifestyle » Young, rich and famous: Is Laroi still the kid from the block? 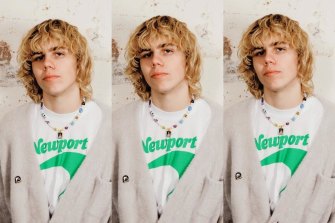 The Kid Laroi: “I know it’s only been three-and-a-bit years but I feel like I’ve lived f—ing 30 years of life, everything is happening so quickly.”Credit:Jess Gleeson

I only have 15 minutes with the Kid Laroi, who is probably the most famous teenager in the world, and we’re arguing about what to order from McDonald’s. We both like nuggets and cheeseburgers, but can’t agree on the drink option.

“You don’t like Frozen Coke?” Laroi asks, with the incredulity of someone who takes their Frozen Coke quite seriously. “So what do you get as a drink?”

I admit to being a thickshake man (strawberry, small) and Laroi buries his head into a pillow. We are holed up in a makeshift office at Sony Music’s Sydney headquarters, flanked by members of his extensive entourage. Laroi (real name: Charlton Kenneth Jeffrey Howard) is sprawled on a couch while I sit in a chair opposite.

For a second, it’s easy to forget that the Kid Laroi is probably Australia’s most successful musical export for decades. The singer-songwriter’s track Stay (featuring Justin Bieber) was streamed more than two billion times last year and topped the Billboard charts, making him the first Indigenous Australian artist to achieve a US number-one single, and also the youngest Australian.

But right now, he comes across as an average teenager who has an effortless charm and easygoing banter, even though he’s probably tired of the endless interviews. 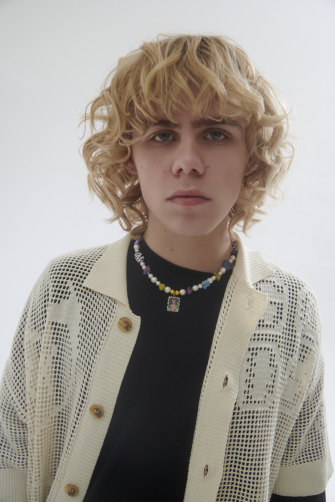 The Kid Laroi arrived in Sydney last week to kick off his global tour.

“OK fine, the thickshake is pretty good, too,” Laroi concedes with a smile. “Still doesn’t compare to the Frozen Coke, though.”

The cynic in me suspects Laroi’s enthusiasm for the fast-food franchise is commercially driven. A testament to his star power, he now has a meal named after him, becoming the first local to follow in the footsteps of other McMillionaires including Travis Scott and K-pop group BTS and Kim Kardashian.

It’s hard to comprehend how different the lives are of the 15-year-old high schooler who left Sydney nearly four years ago and the one who returned last week to kick off his first global tour.

Born in 2003, Charlton Howard grew up in public housing in the inner-city Sydney suburb of Waterloo with a brief stint in Broken Hill. The son of a music producer father and a talent manager mother, the on-paper backstory goes a little something like this: a rough-and-ready teen with a dream, running around the streets of Redfern and Waterloo, rapping for anyone who would listen.

Through sheer force of will and a healthy dose of hustle, he forced the right people to take notice. He chose the moniker the Kid Laroi, a tribute to his Kamilaroi heritage, and, before long, was being heralded as The Next Big Thing. 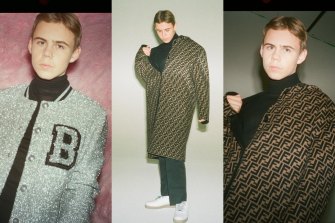 An earlier iteration of Kid Laroi (circa 2020).

From Laroi’s earliest demo tapes it was clear that while he was an Australian in the hip-hop scene, this was not “Aussie hip-hop” as we knew it. There were no mentions of beers, barbecues or getting boozed at the footy. Instead, it was sensitive new-age rap, catchy hooks about pre-teen heartbreak laid down over heavily autotuned tracks.

On his first EP, 14 With A Dream, Laroi was already signposting his intentions: “I don’t got time for their games, don’t pay no mind to these lames, I’m in my own separate lane.”

After landing a development deal with Sony Music Australia in 2017, he signed with the record label Grade A Productions and Columbia Records, a subsidiary of Sony, in 2019. Through Grade A Productions he met rapper Juice Wrld, opening for him on his 2019 Australian tour. The tour to Australia proved to be Juice Wrld’s last. The rapper passed away in December 2019 when he overdosed while on a plane. 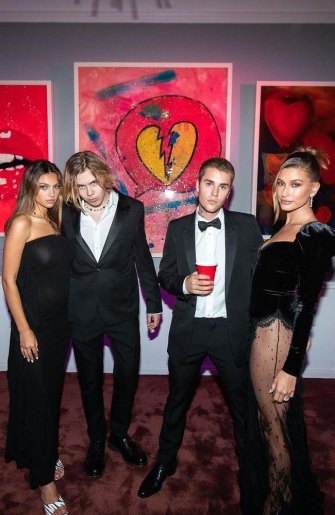 Hollywood power couples: The Kid Laroi and Katarina Deme hanging out with Justin and Hailey Bieber.Credit:Instagram

Laroi was with Juice Wrld when he died, and would later dedicate his debut mixtape, F*ck Love, to his mentor. The mixtape included Laroi’s breakthrough hit, Go, a collaboration with Juice Wrld that would ultimately help launch Laroi into the US market.

Tapping into the TikTok appetite for catchy emo-rap, Laroi was quickly positioned as a kind of Down Under Drake, releasing several angsty earworms including Let Her Go, Without You, F–k You, Goodbye and So Done. So ubiquitous is Laroi’s music now that barely an eyebrow was raised when Spotify last year announced he was the most-streamed local artist and fifth most-streamed artist globally on their end-of-year charts.

The thing I’ve realised from this trip is that it’s all coming a bit quick. I think I’m still processing a lot of my rise.

In the last 12 months, he has collaborated with Miley Cyrus, Justin Bieber and Post Malone, performed on Jimmy Fallon and Saturday Night Live, and was nominated as the best new artist at this year’s Grammy Awards. Milestones that take most artists a lifetime to achieve, he had ticked off by his 18th birthday.

Laroi’s legend was complete: from impoverished wannabe to genuine superstar followed online by millions, his music streamed by billions.
Home for the first time since 2019, Laroi is wearing white jeans, Nike kicks and a ’90s grunge style flannel, his face hidden beneath a mop of blonde hair and black sunglasses. After all of that, is Laroi still the kid from the block?

“The thing I’ve realised from this trip is that it’s all coming a bit quick. I think I’m still processing a lot of my rise,” Laroi says, a twang of Los Angeles now appearing in his Australian accent. “Leaving Sydney feels like a lifetime ago. I know it’s only been three-and-a-bit years but I feel like I’ve lived f—ing 30 years of life, everything is happening so quickly.” 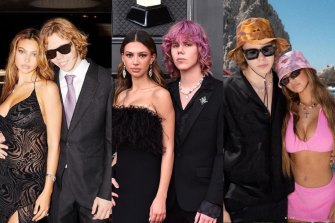 The Kid Laroi and his girlfriend, Kararina Deme, who has accompanied him to Sydney,

His End of The World tour started this week in Sydney, but the trip home has also doubled as an exercise in perspective, a reminder of just how much has changed since he left. After touching down last Sunday, Laroi made a beeline for his old neighbourhood of Waterloo. The first stop was a promotional visit to the local McDonald’s, with his Instagram star girlfriend, Katarina Demetriades, in tow. He then headed back to the youth centre where he hung out as a child, The Fact Tree Youth Service, to hand over a novelty-sized $100,000 cheque.

“That was definitely a special moment for me. It was really cool to take my girl there because I always tell her stories about this whole life I had before her,” Laroi says. “I’ve been dying to show her this part of me because this city is me, so now she understands a lot more about who I am and where I’ve come from, which is really cool.”

It’s hard to connect the images of Laroi being swamped by fans this week with those of him walking the same streets alone just a few years ago. In April 2019, US hip hop podcast No Jumper posted a YouTube video titled The Kid Laroi Takes You Inside the “Ghettos” of Australia.

The half-hour clip, which has three million views, features an on-the-cusp-of-fame Laroi taking podcast host Adam Grandmaison on a tour of Waterloo and Redfern. The pair visited Laroi’s housing commission flat – “We’ve just been kicked out, too many noise complaints,” he says – before linking up with Laroi’s friends to play basketball in the park.

These days, Laroi’s basketball games look a little different. He often shares clips on Instagram of himself shooting hoops with close friend and collaborator Justin Bieber. The pair have become tight since their hit Stay rocketed to number one on the Billboard charts in 2021, Bieber’s eighth and Laroi’s first US number one.

The friendship between Bieber and Laroi is one of several subjects off-limits for the interview. Also on the no-go list are his revolving door of managers and the relationship with Juice Wrld.

Not wanting to rock the boat, I instead query how it felt to come face-to-face with himself in the streets that raised him. Earlier this week, Laroi visited Chapel Street in Waterloo, to see a mural of his likeness painted by graffiti artist Scottie Marsh. 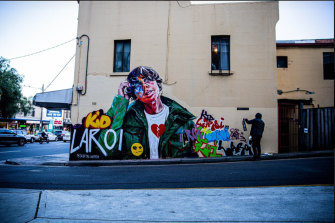 “It was f—ing insane to see and for me to go back there and to feel the love is pretty amazing, that’s what makes it feel real,” he says. “I mean, I’ve grown a lot as a person from 15 to 18, but I am still that kid and even though my life is so different now, I remember what it felt like to have nothing to do and nowhere to go.”

Nearly every moment of Laroi’s day is now planned and plotted. Since touching down, most of his movements have been documented for the record. But I’m curious if he’s had a chance to reconnect with the people and places he knew, away from prying eyes?

“Yeah, I’ve been catching up with the guys I grew up with, it’s been great. We all went to Pancakes on the Rocks for dinner last night, had a meal and chopped it up about our lives,” he says.

And how did it feel to compare notes? “Well, that’s the stuff I keep for me,” Laroi smiles. “And if I told you all about it, it wouldn’t be for me anymore.“
Conscious of the ticking clock and aware this is probably another chore for him (in a recent sit-down with Billboard, Laroi compared interviews to “completing schoolwork”), we move on to the reality of life on the road. 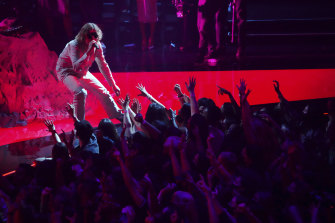 The Kid Laroi started his global tour in Sydney this week.Credit:Charles Sykes/Invision/AP

“It is draining, and difficult. Obviously, you get to do a lot of cool shit, but it’s not good for your mental health, you know?” Laroi says. “I know no one wants to hear a f—ing rich and famous guy talk about problems, but at the end of the day, everyone has problems, it’s still a job and you’re still human.”

Adding to the pressure is the hype surrounding his debut album, due later this year. Laroi has previously released three mixtapes – the highly successful F*ck Love trilogy – but is yet to release a full-length record. Having blazed a trail for Australian musicians, there are high hopes that Laroi will use his platform to put other homegrown talents on the map.

I ask if he might include a collaboration with OneFour, Australia’s all-Pasifika drill rap crew from Sydney’s Mt Druitt, on the new album. Laroi and OneFour came up together in the Sydney rap scene and previously teamed up on the 2020 track, My City, but the group have not performed for some time, after police raised concerns about public safety at their gigs.

“It’s no secret OneFour are one of my favourite artists, we got some shit together. I don’t know whether it’ll be on the album or not, but we got some stuff in the works,” Laroi says.

Laroi’s first single from the album, Thousand Miles, was released earlier this month, but he hasn’t confirmed when we will see the finished product, or, more importantly, what it might sound like.

“The biggest thing for me is that I don’t bend or break myself to try and fit a certain persona. You can never please everyone. I just want to show people me, and they either take it or leave it.”

City of Sydney to increase crisis relief package to $72.5m