Home » An Olympics during a pandemic: an indulgence or morale-booster?

By Phil Lutton and Greg Baum 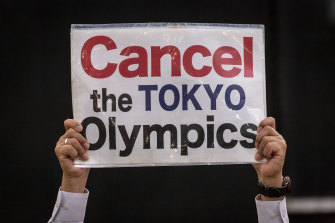 A protestor in Tokyo this week.Credit:Getty

The Tokyo Olympics have faltered once, when, in March 2020, the International Olympic Committee (IOC) and Japan bowed to global resistance as the COVID-19 pandemic accelerated, and announced the postponement of the Games for a year.

At the time, the IOC said the historic decision – the Olympics have only before been cancelled three times, due to the First and Second World Wars – was “to safeguard the health of the athletes, everybody involved in the Olympic Games and the international community”.Now, the rescheduled Games are just eight weeks away and tensions remain high, particularly in the host nation which is in its third COVID-19 state of emergency.

Below, our experts Phil Lutton and Greg Baum debate whether the Games should go ahead or be called off.

Is the main argument against going ahead with the Olympics, at this late juncture, that it’s distasteful? Why does it differ so much from other sport held during COVID around the world?

To a certain extent, it’s the vibe. In raw numbers, the global pandemic is more acute now than when the Olympics originally were postponed 14 months ago. In Japan, the numbers are still high, the vaccine roll-out slow and there is not enough time now for that to ease significantly. It’s all red flags. Yes, other sports around the world are proceeding, but in a much more contained and supervised way than is possible at the Olympics.

Ahhhh … ‘the vibe’. It’s a shame the International Olympic Committee hasn’t hired Dennis Denuto to help them with the big sell for Tokyo. But I completely get the revulsion many people have with the largesse and indulgence of the Olympic Games, especially in these circumstances. But I wonder whether that is now being confused with the viability of the Games themselves. All the money has been spent, so much of the work has now been done and I can’t help but think there is a possibility these things might actually work in a strange, made-for-TV way. Have we come too far now to hit the brakes?

Two strands must be separated out there. The money already spent is eye-watering. Games or no Games, the bill will be huge – $25 billion, give or take – more than any one country or organisation should have to pay. It would have to be split. But unless there are solid gold reassurances about public health, that is the price the Olympic movement will have to meet to call the whole thing off. That is, the movement, globally, all 200-odd countries: following your The Castle theme, they’ll tell me I’m dreaming.

The athletes are another matter. For so many, cancellation would be a crushing blow, destroying their life’s work. Your heart does go out to them. For their sake, the IOC should have had a plan B, conducting each sport discretely somewhere else in the world and bringing them all together virtually on TV. But it’s too late. You’ve been mixing with the athletes and their stories more than me. What do you think?

I agree with your sentiment about the stubbornness of the IOC in terms of no alternate plans, because if this really was all about the athletes, then an Olympic medal in a makeshift Olympic swimming meet in Los Angeles or Sydney would mean just as much to the competitors. Alas, different timezones are of little use to NBC, who need the big tickets in US prime time given they bankroll so much of the Olympic movement. I do feel for the athletes on this front; they are the visible showpiece of it all and are bound to take a good deal of heat for the Games steamrolling ahead. That’s unfair. Already, having written a good deal about them getting vaccinations, they stand accused of being pampered and elite, when the bone-jarring reality is the vast majority do it all for very little or negative sums.

And there is so, so much on the line for them all. Imagine a scenario if an AFL champion was about to play one final game and the grand final was in danger of being cancelled … we’d be seeing blanket coverage. But that also probably serves to show how far Olympic sports have slipped down the pecking order. It’s easy to be an Olympic cynic these days but I know this much; the athletes are just pouring themselves into it and can think of nothing but representing their nation, crowds or no crowds. Can I ask you this Baumy: Do you see a scenario in which the IOC and Tokyo can pull this off?

I can. I hope they do. You might even say they must. The groundwork of this always immense undertaking has been done. BUT it is impossible to gloss over the fact that they are now depending on luck. They are crossing their fingers for the Olympics not to be a disaster. The cancellation of the IPL is sobering. Japan might not be in as parlous a state as India, but it would only take one biosecurity hitch to become a nightmarish unravelling.

Here in Victoria, we know. I’m less across the NRL, but I know the AFL people scarcely slept in their hubs last year. They weren’t sweating just because they were in the Queensland sun. And this was in a COVID-free country. Look, I know this all sounds melodramatic, even alarmist. But I can’t help think back to when the Olympics were postponed last year and the IOC said that in their new timeslot, they would become a celebration of the world’s return-to-normal. Patently, the world is not anywhere near back to normal.

In that light, the Olympics are a massive IOC vanity exercise. And picking up one of your themes about the status of the Olympics now, I regret to say that cancelling these Games would cause one-tenth of the angst of cancelling, say, a soccer World Cup.

Let me play devil’s advocate in that case. We know it’s going to be disastrous if it all comes apart at the seams but on the other side of the coin, what if everyone comes and goes, no infections break loose and the sport provides us with the kind of magical memories only Olympic competition can produce? The IOC gets their money, which in theory trickles down to the sports, and Japan can at least get some recompense for their spend and commitment. At this rate, around 90 per cent of the village is going to be vaccinated, whether that be by home nations or the IOC’s deal with Big Pharma. Athletes have to test negative before they leave, on arrival and every day they are there, all the time they are sealed off from the public. Those restrictions will only get tighter in the next version of the playbook.

There has been almost a dozen test events now in Japan and all have gone off rather smoothly … there’s some chance that translates to a grander scale in July-August. And I’m going to call out the critics in Australia now and suggest at least a few of them will be breaking out the pom poms when we start jagging a few medals in what is essentially a primetime Games in our time zone. There are very few sporting cracks that winning doesn’t paint over.

Even if all goes well inside the Olympic compound, there is a city and country surrounding it to consider. Contrary to impressions, these are the Tokyo Olympics, not the IOC’s Tokyo indulgence. And Japan is petrified. Most of the country is now in a state of emergency. Two-thirds of the population is anti-Games. Politicians are wavering. So is business. Politicians and captains of industry saying no to a photo op: it’s that serious. This national apprehension must count for something if the IOC is not again to be seen as a law unto itself. At street level, there is indignation about the medical resources that will be diverted to the Olympics. Organisers say they need 10,000 medical personnel to cover the Games. That’s an extravagance Japan can’t afford. Just this week, Tokyo’s medics called for the Games to be cancelled. Again, not wishing to sound as if I’m death-riding the Games, but can you imagine the outcry if there is even one citizen death attributable to the Olympics?

This is too far much to heap on the shoulders of athletes. They are pawns. The IOC must make the call and take total responsibility for it. Evidently, it has by default, not making any other contingency plan. In that case, is it possible to wish the Australians all the best on their journeys while holding reservations about whether they should be going at all? I hope you’re right, that the magic of the Olympics prevails. And that you win a Walkley award for your coverage, old son.

Tyson Fury's dad John, 56, in top shape after being inspired to keep fit following death of two of his brothers