With the women's Final Four set for Friday, the NCAA women's tournament account — not the @MarchMadness handle commandeered by the men's tournament — tweeted a run-of-the-mill promotional video to preview the events.

One issue? The video, featuring footage from a Wednesday photo shoot involving the four teams, completely ignored one squad, Arizona, who'd advanced to their first women's Final Four earlier this week following a win over Indiana.

"I re-watched it a couple of times. I was like 'Wait, I didn't see any red,'" Arizona senior guard Aari McDonald told reporters. " … It was frustrating. I definitely took it as a sign of disrespect. But it is what it is. Got to get it together. I mean, we're not worried about that. We're going to do our thing and, definitely, you're going to see that translate to the court."

According to ESPN, the NCAA — which took down the original video — apologized via Twitter direct message to the program's Twitter account, which had initially pointed out the omission.

"Those are things that get missed, sometimes, and shouldn't be," Arizona coach Adia Barnes, one of two Black coaches at this year's Final Four (a first), told ESPN. "Because there are four teams that have worked really hard to get here. Stuff like that shouldn't happen." 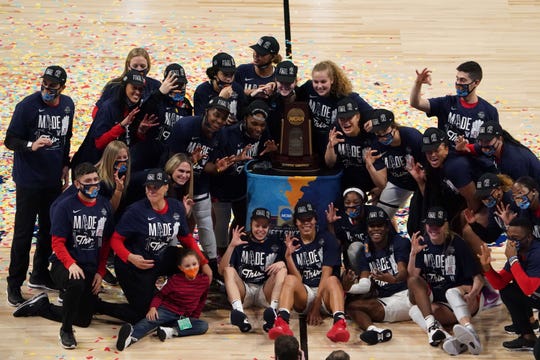 In a statement to ESPN, the NCAA said "we will continue to work hard to recognize all four of the Women's Final Four teams for their incredible runs and remarkable seasons."

This isn't the first time the inequality between the men's and women's tournaments has been on display this postseason: training equipment, gifts received and other issues have been pointed out in the women's NCAA bubble in Texas compared to what the men have received in Indiana.

Fifa delays its Congress in Ethiopia because of coronavirus