MIAMI GARDENS, Fla. — This year’s Miami Open is about 20 miles north of its previous home on Key Biscayne, but the tournament’s cultural epicenter is unmoved. It’s still somewhere thousands of miles to the south.

Because there is no tournament of its caliber in Mexico, the Caribbean, or Central and South America, the Miami Open has developed into the de facto Latin American Slam, drawing fans from the region and its diasporas, transforming this Florida fixture into a virtual homecoming for Latino players.

“It’s really nice to have the support,” said Leonardo Mayer, an Argentine. “It’s almost like playing in Buenos Aires.”

The top South American player, Juan Martín del Potro of Argentina, missed this year’s tournament because of a knee injury, but fans had to change only one letter in their customary cheer for him in order to root for his compatriot Federico Delbonis, who took a set off top-ranked Novak Djokovic on Sunday. Instead of “Olé, olé, olé, olé! Delpo, Delpo!” they chanted, “Delbo, Delbo!”

Even away from the court, the Miami area’s large Latino population affects the experience of playing in the tournament. Delbonis said he appreciated being able to buy yerba mate leaves in Miami to make his favorite beverage; for most events, he has to travel with his own supply.

“Every time I come here I feel like I want to be here, I want to live here,” he said. “When I got to the court today, I heard a lot of Argentinians speaking Spanish, cheering in Spanish, and you feel that energy they give you. They give you confidence, and you feel it inside. It’s good for your game to be more happy on court.”

Monica Puig, who in 2016 won Puerto Rico’s first Olympic gold medal, had vocal support from many Puerto Rican fans in her first-round match on Wednesday, when she lost to Wang Xiyu. She said regretted not being able to play more matches throughout the season in front of that crowd, which included her father.

“Having that Latin American feel here, just buzzing all over the place, it’s really special,” said Puig, the only Latin American woman ranked in the top 100 in singles.

Even fans from Latin American countries that are not represented among the players make their presence felt. After Fabio Fognini of Italy defeated Guido Andreozzi of Argentina on Friday, a woman unfurled a large Paraguayan flag.

Latin American reporters travel to the Miami Open in droves, with 24 representatives of Argentine news media leading this year’s international contingent, according to the tournament.

James Blake, the tournament director, said the presence of Latin American fans was organic, with no international marketing directed at them. (While Latin food and music can be found on the grounds, all the signs at the Miami Open are in English.)

Players from the United States have to adjust to this rare home tournament where the crowds may not tip in their favor. Pablo Cuevas of Uruguay recalled being stunned in 2011 when fans chanted his country’s name as he upset Andy Roddick, the defending champion and American star, on the stadium court of Key Biscayne. 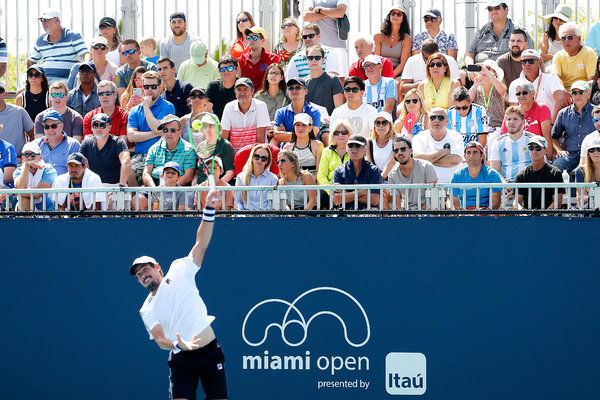 In one of the last matches played at the old venue in 2018, the American John Isner, the eventual champion, had little support when he met del Potro in the semifinals.

“The fans were great, but it was not 50-50,” Isner said, smiling. “There were a lot of Argentinian flags, that country loves their sport, loves their soccer and their tennis. To see all the flags in the crowd, it was a very, very cool atmosphere.”

Many other non-Latin American players similarly relish the passionate crowds.

“I’ve always played the best in countries and in places where I felt that energy,” Alexander Zverev of Germany said. “In Rome I always felt great. Italians are very energetic, powerful people. Madrid, Mexico, Miami: It’s always those kind of places I’ve played well in. For me, I enjoy when the crowd is loud, energetic, and it’s nice when this happens.”

Dominic Thiem of Austria has won four of his 12 career titles in Latin America — two in Argentina and one each in Mexico and Brazil.

“The energy in these countries and from these people is nice,” Thiem said. “It feels like they are always in a good mood. They are happy to live, I feel. It’s sometimes different in Europe — maybe it’s the weather, I don’t know.”

Blake, a former player from the United States, said he had savored his two matches against Thomaz Bellucci of Brazil at the Miami Open, where American supporters could not match the Brazilians’ boisterousness.

“Those are a lot of fun, because you’re on the edge of your seat,” Blake said. “Every big point, every shot, is exacerbated by the fact that the crowd’s going crazy, and you’re angry at yourself because their crowd is going crazy.”

Players are not always comfortable with the din.

“There are some players who don’t love it,” Blake said, “and they’ve voiced that to me, plenty.”

After she lost to Puig last year, Caroline Wozniacki of Denmark threatened to boycott the tournament, saying her supporters felt threatened by people in the profusely pro-Puig crowd.

Wozniacki did return this year and said she had not discussed the incident with tournament organizers since. Last week she focused on the positives of the partisanship — like hearing the chants for Delbonis as she played on a nearby court, and being able to quell the noise.

“I could hear it was like a soccer-like atmosphere,” Wozniacki said. “It’s cool. It’s obviously more fun when they cheer for you. At the same time it’s also fun to quiet the fans. It’s fun when all of a sudden it goes dead quiet.”

Jérémy Chardy enjoyed silencing the cacophony of Chileans who were raucously supporting his opponent, Nicolàs Jarry, in their first-round match. After he won, he blew kisses toward the Chilean contingent.

“You always know when you play a South American here it will be difficult,” Chardy said. “The crowd was difficult all the match, and I didn’t say a word. Just at the end when I won, I wanted to send them kisses, and they replied with some fingers.”

Chardy said he appreciated the animated crowd, despite the animus.

“Even if it was not always respectful,” he said, “I prefer when there’s atmosphere to no atmosphere.”