PIERRE-EMERICK AUBAMEYANG'S brother has appeared to confirm the striker has signed a new Arsenal deal.

Willy, 33, sent fans into meltdown as he dropped a huge hint during an Instagram live video. 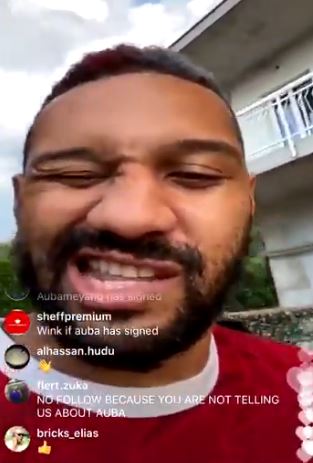 Aubameyang's future at the Emirates remains up in the air as his contract is set to expire next summer.

After scoring 29 times this season, fans are desperate for the 31-year-old to extend his stay in North London.

His brother was on Instagram live when he was asked to wink if the striker has penned a new deal.

And to their surprise, the 33-year-old immediately winked at the camera.

One excited fan said: "That's got to be proof now!"

Another added: "Ok come on now, this is a real sign."

But not all of the fans were convinced that the recording is worth getting excited about.

One said: "This is a bit stupid. Willy didn't even read that message and blinked. Just re-watch the video."

And one fan joked: "'Pierre-Emerick Aubameyang's brother breathes when asked to breathe if Auba has signed a new contract'."

Aubameyang gave fans a hair-raising hint as he dyed his barnet red and white this week.

Should he sign a contract extension, Alexandre Lacazette could be sold to Atletico Madrid for £30million.