Home » Sport » Behemoth makes his mark, and sky’s the limit for ambitious owners

We are all accustomed to tactical voting in political elections. But in horse racing?

It could just come into play for the All Star Mile, Racing Victoria’s new $5million showcase event in which the public will have a big say in who gets in the field – and who doesn’t.

If not so much next year, when the inaugural running of the 1600 metre will be staged at Flemington with Winx as the potential headliner, but perhaps in 2020. 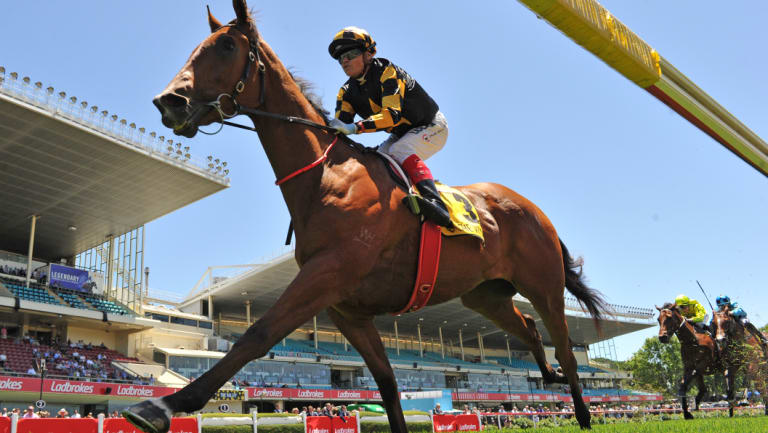 Giant steps: Craig Williams shows the field a clean pair of heels on Behemoth at Moonee Valley on Saturday.Credit:AAP

Connections of South Australian trained galloper Behemoth, an easy winner of a minor race at Moonee Valley on Saturday, know that they have a long way to go if their immature three-year-old is ever going to reach the standards required for such a lucrative race.

But they are optimistic the son of All Too Hard, who looks to have been a huge bargain (he cost only $6000 as a yearling), will eventually make up into a high class 1600 metre horse with the sort of ability to put him in contention for such a race.

If he does get there, they would be hoping to get Adelaide and SA racing fans to click on his name when the popular poll to determine 10 of the 14-horse field takes place.

‘‘We would hope he makes up into the sort of horse that might get to a race like that and if he does, well we could ask the SA public to get behind him,’’ grinned Sam Lyons, the spokesman for the syndicate that owns the David Jolly trained three-year-old.

‘‘There is a long way to go but we feel this horse has got a lot of ability and will make up into a good four-year-old.’’

Lyons and his group look to have secured an absolute steal with Behemoth, who was sold for $120,000 as a weanling but fetched only a fraction of that when offered for auction at the Magic Millions sale.

But what you don’t know can’t bother you, as Lyons explains: ‘‘He was a great purchase by John Price from the Magic Millions June sale as a $6000 horse. I would suggest that his X-rays probably weren’t the best when we bought him. We didn’t do them, we bought him on type and what we thought of him.

‘‘He’s always been a big green gross dopey kind of horse and we just assume it was the X-rays [that caused his price to fall so dramatically]. We don’t do them when we buy them, as it gives you reasons not to buy horses. If we had done them we wouldn’t have bought this horse.’’

Jolly is prepared to be patient with his galloper, who has now won two of his four starts and picked up a cheque for $66,000 when winning over 1200 metres at the Valley.

‘‘From day one he has shown us that he is immensely talented, but he’s quite a big horse so we have had to wait for a bit. But I have seen him do things at home that have been quite astonishing against horses that have won city races on Saturdays in Adelaide,’’ Jolly said.