THE world of boxing has united to support the 'No Means No' campaign following Sarah Everard's tragic death in March.

Brit superstar Natasha Jonas, who returns to action to face Katie Taylor in a mouth-watering clash next month, is among those to back the campaign. 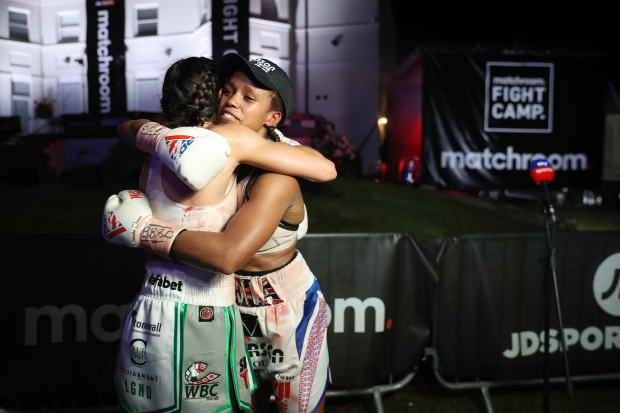 Yafai said: "Im supporting the No Means No campaign because I also feel it needs the support of men.

"No female should feel unsafe. No means no for a reason and that should be respected."

Jonas will challenge Katie Taylor for the undisputed lightweight world title on 1 May.

The fierce duo went toe to toe at the London 2012 Olympics with Bray-born Taylor coming out on top.

Jonas said: "I stand with my sisters and, as a woman and a mother, No Means No."

Scottish star Rankin added: "I want to be part of the campaign because as a strong independent female with a public profile, I believe it’s important to give others a voice and a platform."

The campaign is being led by sports agent Sonia Randev, who works with several of Britain's leading female boxers.

Randev said: "The importance of us all coming together is because our unity shows greater strength,

"It has taken a young woman to lose her life because she was simply walking home.

"We have been speaking up for years for women to be treated fairly and feel safe.

"We shouldn’t have to ask to feel safe. These are human rights. Things have to change and it needs to change now."

Bryan said: "It’s important for me to use my profile as an athlete to get behind this.

"But it’s more important for me to get behind this because I’m a man and we need to stand by these Women.”

Okereafor added: "I was raised by my Mother and have a younger sister.

"Im a professional athlete yes, but I’m also a son and a brother.

"It's important for me to get behind this movement and stand with women.”