After missing out on finding his way on to an AFL list during the recent trade period, Casey Voss has been invited to train with the Brisbane Lions for two weeks either side of Christmas to assist his football development.

The son of Lions legend Michael, who captained the club to three flags between 2001-2003 and is now an assistant coach at Port Adelaide, played for Sturt under-18s and reserves during 2018 and was granted permission to play one game for the Lions in the NEAFL in the middle of the season, picking up 12 disposals. 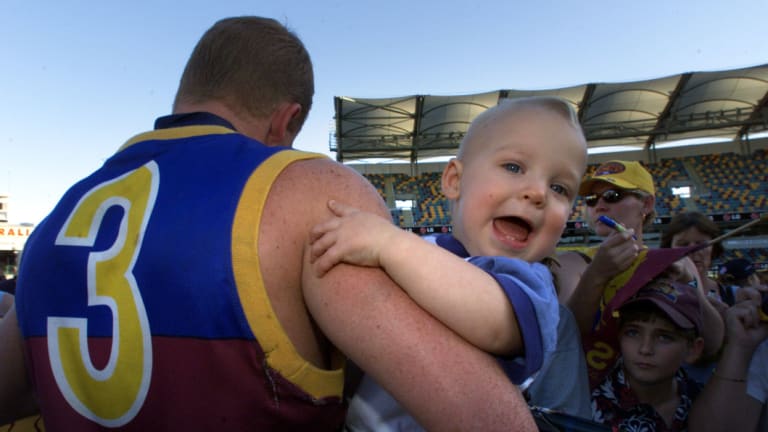 Michael Voss with his son Casey, then 1, at the Gabba.Credit:Angela Wylie

The teenager then attended the South Australian state combine on October 13 but was overlooked in the recent national draft.

The Lions do not have rookie spots available so the invitation is not expected to lead to Voss playing for the club in 2019, but the Lions are understood to be keen to monitor his progress and support his football development with the AFL granting him permission to train.

Michael played 289 games for the Lions, leading the team to three flags and winning a Brownlow Medal and five club best and fairests.

He was senior coach of the Lions from 2009 to 2013 before moving to be an assistant to Ken Hinkley at Port Adelaide.

There were six father-sons drafted in this year's national draft and retired Hawthorn premiership player Will Langford was re-rookied in the rookie draft despite the fact he will not play in 2019.

‘My family are more worried than I am’: Roberton eyes round one return

Tkachuk looks good in losing cause for Sens