Unlike his fellow family member, Sobowale's career has gone under the radar as he plies his trade with Walton Casuals. 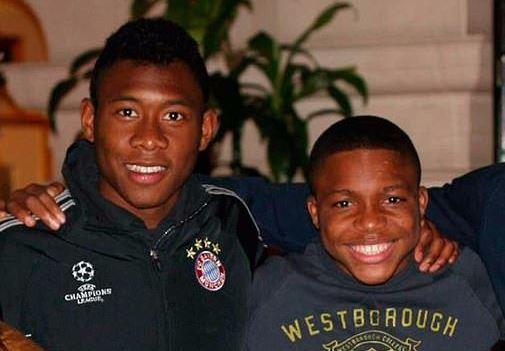 The 21-year-old striker was released by Chelsea six years ago and his since endured trials across the country.

His latest was at both Cardiff and Barnsley but they decided against offering him a professional deal despite having an impact in friendlies.

Sobowale scored the winner in Cardiff's pre-season win over Vancouver Whitecaps while also netting for Barnsley in a draw with Sheffield United.

According to the Daily Mail, Watford are showing a keen interest alongside Championship duo Reading and Sheffield Wednesday.

Sobowale, whose father is the brother of Alaba's old man, used to train alongside the likes of Tammy Abraham and Dominic Solanke.

He was let go at Chelsea because of his size but has since developed physically and boasts blistering pace.

Alaba was already an Austrian international and making headway's in the Bayern Munich team while he was Sobowale's age.

But there is every chance that the youngster could become a late bloomer and follow in his cousin's footsteps by earning a professional deal.

Athletics: IAAF hits back at Semenya to be classed as 'biological male' reports