Netball Australia boss Kelly Ryan is adamant her national team is as hungry as ever to take back top spot at this year’s Commonwealth Games after two devastating losses in 2018 and 2019 put their international dominance into question.

With the Diamonds landing in London on Monday, Ryan has revealed her message to both the squad and head coach Stacey Marinkovich as the group sets out to prove Australia is still the No.1 netball team in the world.

The Diamonds were twice edged out by just one point in the 2019 Netball World Cup and the 2018 Commonwealth Games, losing to England before falling to New Zealand just a year later.

The back-to-back losses were heart-wrenching for the Diamonds, whose coach Lisa Alexander was dumped as a result.

As Australia prepare to take on England, New Zealand and South Africa next week in the 2022 Quad series in their final series before the Commonwealth Games in Birmingham, the message from Ryan is to use the matches to learn about themselves as a team.

Due to COVID-19, the Diamonds have barely trained in the last year and were defeated in their last international Test series against New Zealand in March 2021. 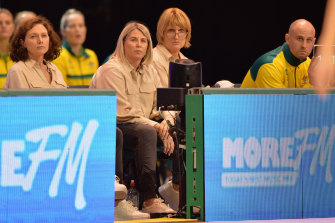 Netball Australia chief executive Kelly Ryan (left) has faith in head coach Stacey Marinkovich (centre) and is adamant the Diamonds can get back on top. Credit:Getty

The Quad series will take place at Copper Box Arena in London from January 16 to 20 and also features the Silver Ferns, the Spar Proteas and England Roses.

“This trip is just so vitally important,” Ryan said.

“It’s not so much about the series in its own right, but about that run in the preparation that we need to really hit before the Comm Games. It’s almost been 12 months since they last came together. And 12 months is a long time in a sporting life cycle. So them as individuals, it’s really critical to see how they’re tracking.”

To get to London, the Diamonds were forced into a team bubble on Christmas Day and won’t be interacting with the opposition until game day.

Testing will be regularly undertaken and Diamonds players are unable to venture around London.

Ryan said the players’ dedication proves how hungry they are to prove Australia is still on top of the netball world.

“They are unbelievably hungry; make no mistake,” she said.

“You can’t beat what that international exposure does and obviously, international success on the back of that we undoubtedly think is incredibly important [for the sport as a whole].“

Last week, Marinkovich spoke about the series and the value in seeing how their competition is tracking before the Commonwealth Games.

With Marinkovich’s first experience in the top job the Diamonds’ defeat in the Constellation Cup, the head coach will be out to prove her ability in this series.

“We’ve had a really good focus around what we need to do and while it would be ideal to have the preparation against the other teams in the lead-up too,” she said last week.

“The exciting thing is now we will be able to see where we’re at and what gaps we need to fill going into the Commonwealth Games.”

The Diamonds will take on the Ferns on Sunday at 3.15am (AEDT).