SAN FRANCISCO  — Dustin Johnson lost his yardage book and still found his way through an enormous crowd of contenders Saturday, making eight birdies at Harding Park for a 5-under 65 and a one-shot lead in the PGA Championship.

Nothing ever comes easily for Johnson in the majors. In this case, his brother had a spare yardage book. Even that might not have stopped Johnson from making his most birdies in any round of a major.

And he needed them all.

Johnson was among eight players who had at least a share of the lead at some point Saturday, a wild third round of low scores, long putts and endless possibilities. 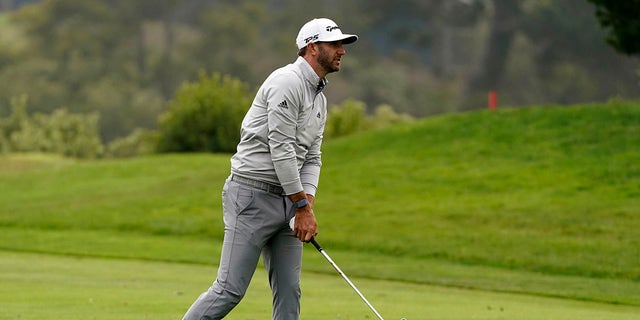 Dustin Johnson hits from the fairway on the 18th hole during the third round of the PGA Championship golf tournament at TPC Harding Park Saturday, Aug. 8, 2020, in San Francisco. (Associated Press)

One possibility is Brooks Koepka hoisting the Wanamaker Trophy for the third straight year, which hasn’t happened since Walter Hagen won four in a row in the 1920s when it was match play. Koepka was one shot behind when he made a few careless mistakes, ran off three straight bogeys and had to birdie the 18th for a 69 to stay within two shots.

Scottie Scheffler, the PGA Tour rookie from Texas, bogeyed his last hole for a 65 and was one shot behind with Cameron Champ (67), who grew up in Sacramento and has the most powerful swing on tour.

Johnson was at 9-under 201 as he goes for his second major title. For all the chances he has had, this is only the second time he has led going into the final round.

Among the cast of contenders are major champions like Koepka, Jason Day and Justin Rose, and fresh faces like Scheffler, Champ and Collin Morikawa. Also right there was Bryson DeChambeau, thanks to a 95-foot putt for birdie on his last hole. Turns out he can hit long putts, too. 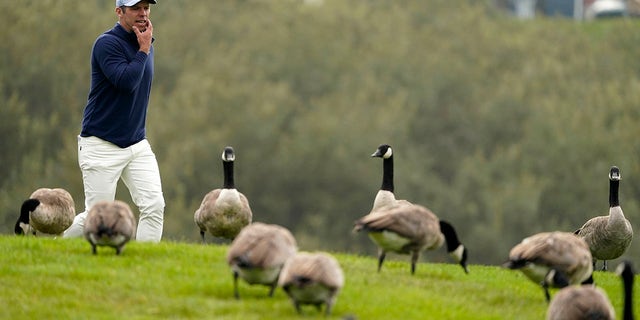 Paul Casey walks past a flock of geese on the 18th hole during the third round of the PGA Championship golf tournament at TPC Harding Park Saturday, Aug. 8, 2020, in San Francisco. (Associated Press)

Missing from all this action is Tiger Woods, who didn't make a birdie until the 16th hole and is out of the mix for the fourth straight major since his emotional Masters victory last year.

A dozen players were separated by three shots.

Li Haotong, the first player from China to lead after any round at a major, was leading through 12 holes until his tee shot didn't come down from a tree. He made double bogey, dropped two more shots and finished four shots out of the lead. 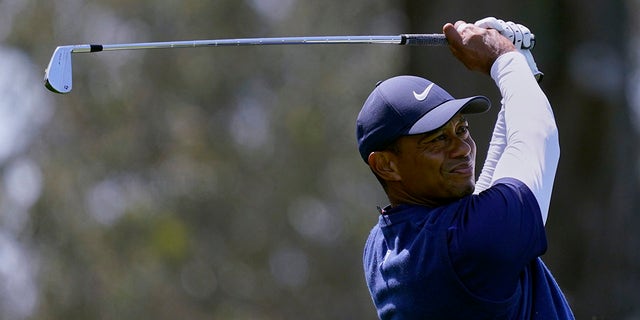 Tiger Woods watches his tee shot on the eighth hole during the third round of the PGA Championship golf tournament at TPC Harding Park Saturday, Aug. 8, 2020, in San Francisco. (Associated Press)

Johnson didn't have smooth sailing, either, especially when he couldn't find his yardage book. He thinks it slipped into the bottom of the golf bag, and he didn't feel like dumping his 14 clubs all over the ground to find it. Austin Johnson, his brother and caddie, had a spare.

Johnson shot 65 even with a double bogey on the ninth hole. Mistakes like that might be more costly on Sunday, the first major without any spectators. There was some concern that so many people in contention and no noise on the golf course might make it difficult for contenders to keep track of what's going on.

Then again, Johnson won the U.S. Open in 2016 at Oakmont without knowing the score as the USGA tried to decide whether he should be penalized.

‘She’s perfect for this:’ Inside Florence Schelling’s ascent to becoming a GM