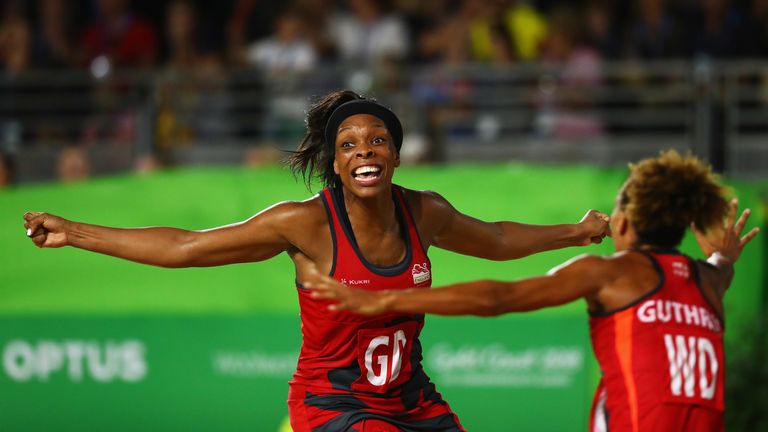 On April 15, 2018 the Vitality Roses created history in the most dramatic and thrilling of fashions.

After both England’s and Australia’s routes to the final, and the netball they had played during them, the world was set for a fierce contest.

However few outside of the Roses camp, in their heart of hearts, would have put their mortgage on England coming away as the victors.

Why? Well the Australian Diamonds were (and are still) the world leaders, they were playing on home soil and had been in that position numerous times before. England had not.

The Roses’ semi-final victory over Jamaica marked their first progression into a Commonwealth Games final and they had never beaten Australia in a major tournament before.

Yet, Eboni Usoro-Brown and the rest of the side produced the match of their careers. They overcame adversity, clawed back from 40-36 down in the last quarter, before creating the moment the world will remember forever as Helen Housby nailed their gold medal-winning goal.

“It’s hard to think that it’s been a year,” said defender Usoro-Brown to Sky Sports News on the anniversary of the victory.

“I just remember, at the time, it being so electrifying when Helen sunk the last goal and we were just screaming and roaring.

“It was such an epic moment in history for us, for our families and for our support team and we were so proud to bring it home for England Netball.”

Usoro-Brown made her international debut back in 2008 and the triumph on the Gold Coast came at the end of her third Commonwealth Games.

As someone who has been a part of the sport at the highest level for so many years, she is well placed to see and comment on the influence their gold medal has had.

“I think that the impact has been absolutely huge and attitudes are definitely changing,” Usoro-Brown said. “So many people are saying, ‘We watched that moment, we were crying and we were jumping up and down’.

“It really has inspired women, young girls and men to take up the sport.

“I think that’s evident in the fact that we’re seeing so many more people coming to our Superleague games and really getting into the spirit of netball. Hopefully that will continue to transpire as we move towards the World Cup.”

The Vitality Netball World Cup 2019 is approaching at a rate of knots with day one at the M&S Bank Arena in Liverpool happening on July 12 and every game being shown live on Sky Sports.

The Roses’ last outing before then, saw them beat the Diamonds for a second time. It’s a victory Usoro-Brown played her part in, combining with outstanding Geva Mentor in their defensive circle, but the Team Bath player is not getting too carried away by that result.

“We’re just making sure that we focus on the process,” said the 31-year-old.

“We had a stellar series in January against the Australians. We didn’t quite get the first place that we were looking for but it gave us a lot of confidence going into this World Cup.

Great team performance tonight ❤ Grateful for the POM but HUGE credit to @jadeyclarke @GevaMentor and @serenabob for keeping me on track ❤ Thank you to our fans for your support, it is really appreciated ? We go again on Saturday xx @EnglandNetball #ItsUsItsNow #RosesRISING ? pic.twitter.com/fH3Htp6zPO

“I think that we can’t discount Australia, they’ve been world No 1 for so long and for a good reason. We did just win by one goal [at the Commonwealths, three in Quad Series] so we’re just trying to keep it in perspective.

“We’re making sure that we get to the competition prepared enough. We’re just going to take it game by game and hopefully we’ll find ourselves in that final.”

Equally Usoro-Brown will not be drawn into thinking her place in Liverpool is a done-deal, that humility is the mark of the athlete. However her bank of experience and form with Team Bath, signals strongly she will be a vital part of Tracey Neville’s plans in July.

She said: “Preparations [for all players] are going really well. The Superleague this year is absolutely electrifying, everyone is beating each other from seventh place to first place

“So, it’s been great to be a part of the league and I think that Tracey is going to have a very tough decision as to which players make her final 12.

“I think that all of the girls are in good spirits, there’s great camaraderie between us. So, as to who makes it, let’s see what happens.”

England are pitched in Group D alongside Uganda, Scotland and Samoa and they start their campaign against the Uganda She Cranes on the first day of the tournament on July 12.

The day after delivers a meeting with Scotland before they play Samoa 24 hours later. It’s a schedule that is not for the faint-hearted but it’s one they are used to and will be prepared for.

“We’ve got such strong chances this summer. I think the fact that it’s a home World Cup in Liverpool, in front of our home fans with our family and friends there, gives us even more incentive,” added Usoro-Brown.