Carlton decided to announce their leadership group for 2019 before Christmas at the request of new co-captains Patrick Cripps and Sam Docherty.

The pair believed that officially naming leaders at the start of pre-season would benefit the group and help them fast-track the young squad's development.

The streamlined group of five will include former Blues' skipper Marc Murphy, as well as veteran Kade Simpson and midfielder Ed Curnow with Cripps saying the co-captains will lean on the experienced trio.

Docherty told the club's website the three players were standouts in an internal poll, with each gaining a minimum of 31 votes from players and coaches and the trio are understood to have been keen to contribute once again with the five players entering their third consecutive year in the leadership group. 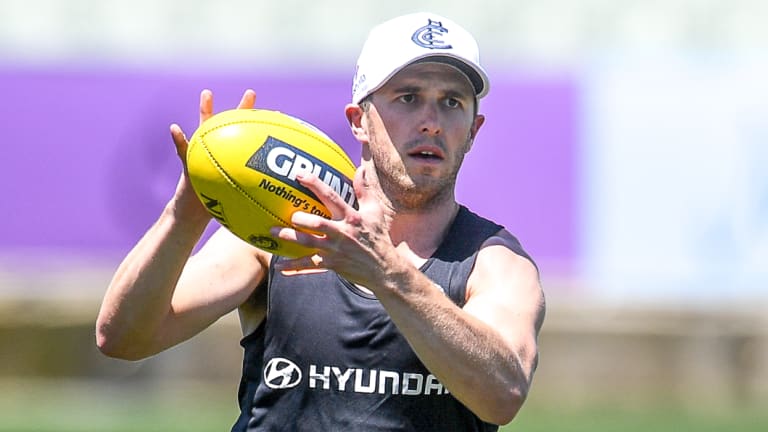 Marc Murphy has handed over the Carlton captaincy but remains in the leadership group.Credit:Justin McManus

Cripps revealed he had spoken to former Brisbane Lions skipper Jonathan Brown about the role with the advice being for him to not only have a presence but to continue being authentic.

"Once you do have a relationship with the young boys when you do challenge them or celebrate they know it's not personal … you are just trying to get the best out of the them," Cripps said.

Murphy, who handed over the captaincy at the end of the season after six years in the job, said he was happy to continue in a leadership role after the co-leaders asked him to stay involved.

Matt Kreuzer, who turns 30 next season, and Lachie Plowman, whose season was cut short last year through injury, will not continue in the leadership group while Alex Silvagni retired at the end of the season.

The Blues will be under pressure in 2019 to push up the ladder after a disappointing 2018 when they won just two games and finished on the bottom of the ladder.

Not only did they add Sam Walsh to the club as the No.1 pick they were active during the trade period recruiting Adelaide's Mitch McGovern, Collingwood's Alex Fasolo, Sydney's Nic Newman and Greater Western Sydney's Will Setterfield.

The Blues will be looking to improve their scoring power too, having not scored 100 points or more since round 12, 2016.

Carlton have not finished higher than 13th since 2013 when they were elevated into the finals after Essendon were banned from participating.

Brendon Bolton, who began as coach in 2016, has overseen the rebuild in which the Blues virtually returned to ground zero to obtain high-end talent at the draft.

They have won just 15 of the 66 games with Bolton as coach, however he has maintained a consistent line that the tide would turn if they stuck to the plan.

Knicks hoping for encore from ‘Quickley Quintet’ after thrilling win