The nephew of Formula One legend Michael Schumacher has broken his spine in a horror crash in Germany.

David Schumacher suffered the injuries after a collision with Thomas Preining during Saturday’s DTM event at Hockenheimring.

Both cars were battling for position following a safety car restart when they made contact braking into turn eight, sending them careering into the barriers before bouncing back onto the circuit. 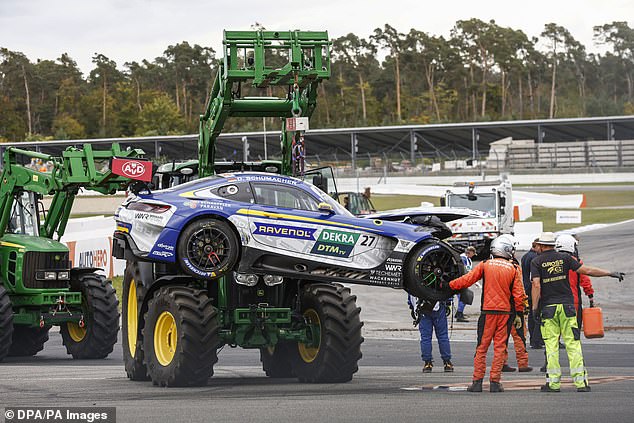 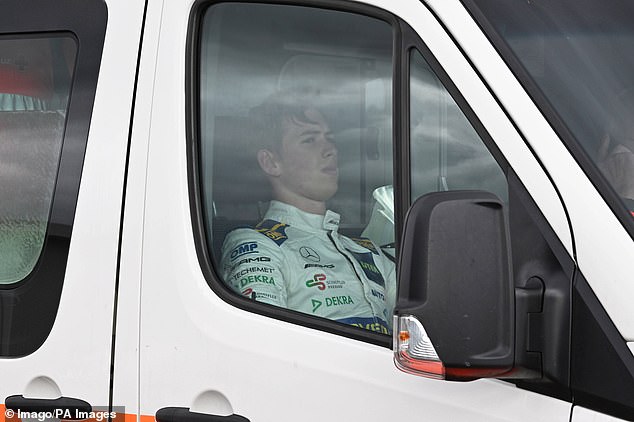 Schumacher, 20, was initially given the all-clear after the crash but further scans revealed he’d broken his back and he will need six weeks of recovery time

The ensuing chaos caused the SSR Porsche of Dennis Olsen to lose control and engine components that flew loose from his car briefly ignited into a fireball on the track.

Schumacher’s Winward Mercedes and several other vehicles sustained heavy damage and the race was red-flagged.

All the drivers involved were taken for medical checks and Schumacher, 20, who is the son of ex-Formula One driver Ralf, was initially given the all-clear.

However, further examinations later in the week revealed a lumbar vertebra in his back was broken. 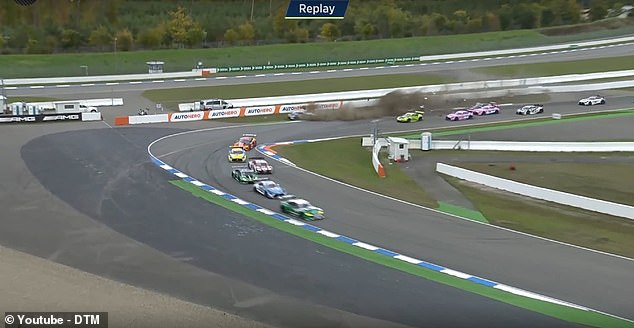 Ralf Schumacher told Motorsport magazine: ‘When David came home, he was still complaining about back pain.

‘We then decided to go to a hospital in Salzburg to have a MRI done. It turned out that a lumbar vertebra was broken.

‘According to the treating physicians, this means a break of around six weeks for David.’

The DTM series finished at the weekend, meaning Schumacher won’t miss any racing during his six-week rehabilitation and he doesn’t require surgery. 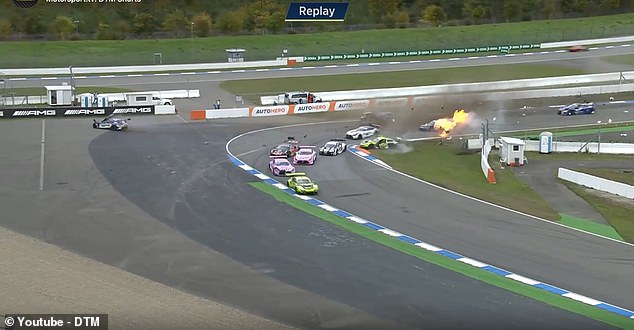 Chaos then ensued as the cars collided, with parts from the car of Dennis Olsen, who crashed into the opposite barrier, briefly igniting on the track 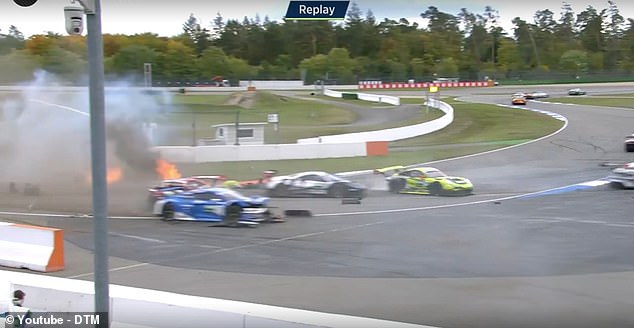 A fireball exploded on the track from engine parts thrown from Olsen’s car as cars collided and careered off in all directions, leading to the race being red-flagged

Preining blamed Schumacher for the crash but Schumacher’s mum Cora hit back on social media.

She wrote: ‘David Schumacher is doing well, that’s the most important thing.

‘Nevertheless, I have to say that I absolutely don’t think it’s okay for Thomas Preining to make negative comments about our son every time without any self-reflection.

‘He himself had oversteered and did not have his car under control. It’s always easier to look for faults in others.’

His uncle Michael, the seven-time Formula One world champion, has been out of the public gaze since he suffered a severe brain injury during a skiing accident in the French Alps back in December 2013. 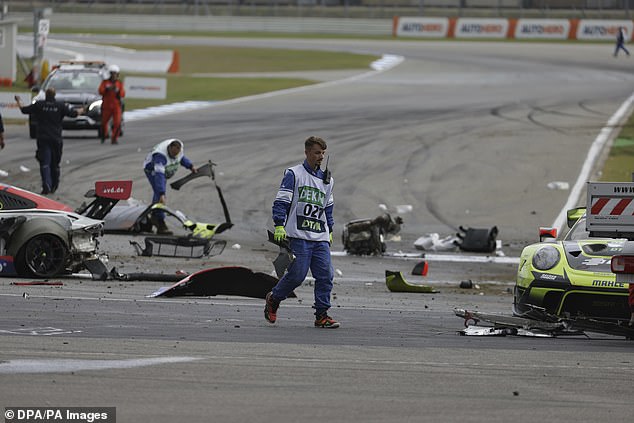 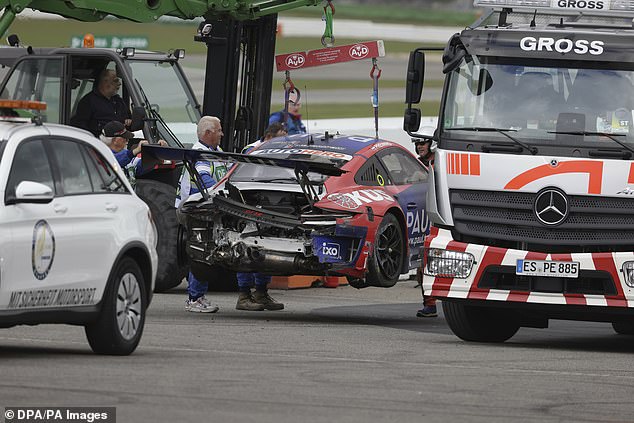 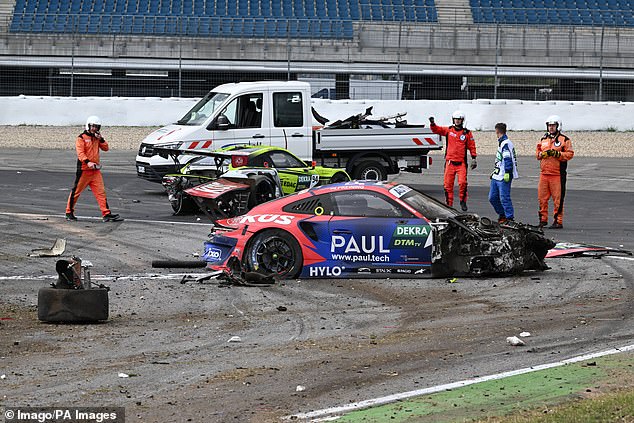 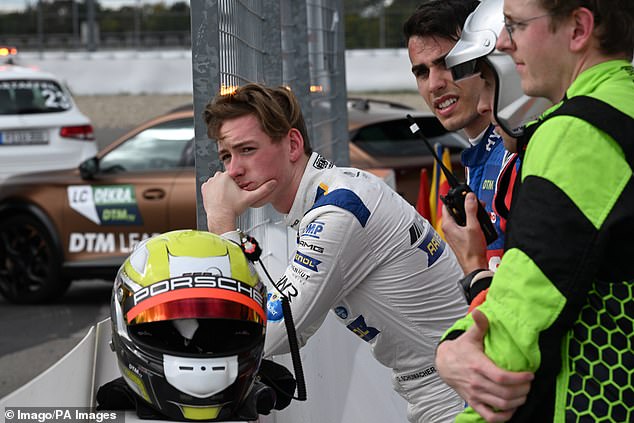 Schumacher watches on after the race was red-flagged, having suffered back injuries

He was placed in a medically-included coma in 2014 and taken to his family home in Switzerland.

Updates on his health remain few and far between, however. 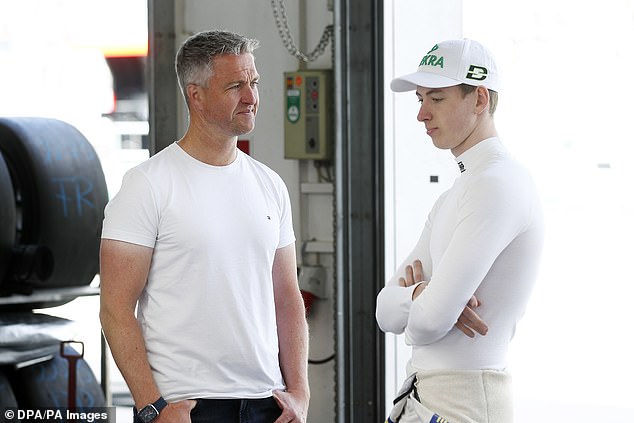 David Schumacher speaks with his father Ralf, the former F1 driver, at an earlier DTM race

The future of Mick Schumacher, who is David’s cousin, is up in the air with Haas yet to renew his contract, which expires at the end of the current F1 season.

He crashed out during the first practice session of the Japanese Grand Prix last weekend and then finished 17th in the race. 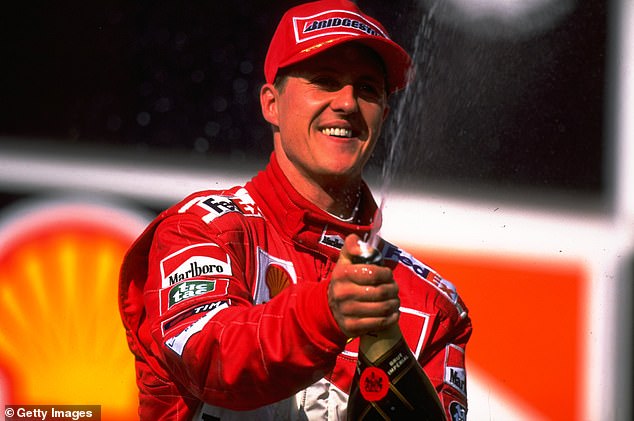 Updates on the health of F1 legend Michael Schumacher, who suffered a severe brain injury during a 2013 skiing accident, are few and far between