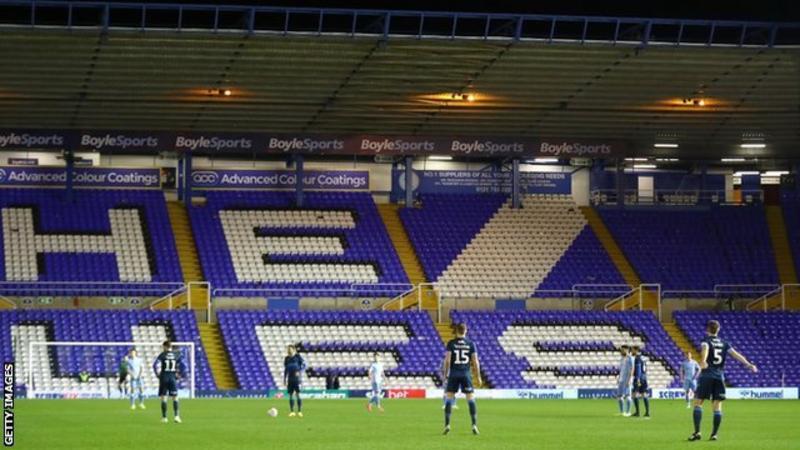 “We’ve got some horrible infighting between our own supporters. Some are called scabs. I have seen it break families apart.”

Dave Eyles is talking about League One Coventry City’s groundshare 22 miles away at Championship club Birmingham City. It is a topic which has fractured the Sky Blues fanbase since they left the Ricoh Arena last summer.

On Saturday, thanks to the FA Cup fourth-round draw, tenants Coventry are ‘home’ to landlords Birmingham at St Andrew’s.

Eyles, chairman of the Sky Blues Trust, an independent supporters’ group, will not be there.

While some supporters have not missed a home game all season, others are refusing to attend until Coventry return to the city.

“I’ve been a season-ticket holder for 25 years but I don’t believe in supporting the club in any move that takes us outside the city,” Eyles told BBC Sport. “It’s heart-wrenching to see.”

Coventry made the move after owner Sisu, the London-based hedge fund, failed to agree a deal with rugby union Premiership club Wasps, who own the Ricoh Arena. The 1987 FA Cup winners had no option but to agree a second groundshare in six years or face expulsion from the Football League.

Two sides of St Andrew’s are closed at Sky Blues home games. The club’s average attendance has plummeted from 12,362 last season to just 6,219. Yet despite the upheaval, Mark Robins’ side are fourth in League One.

“Fans just want to get back to following football,” Eyles said. “This season, the product on the pitch is fantastic. Mark Robins is doing a great job and the team is playing cracking football.

‘We go because it’s been a family tradition since 1968’

With the fans split over whether to keep on following Coventry in exile, the Sky Blues Trust is encouraging all parties to find common ground to bring the club back home.

The support has reacted in different ways. While Eyles now watches Coventry rugby club on the Saturdays he would have spent at Sky Blues home games, fellow Trust member Neil White regularly drives from his home in Nottingham to Coventry to pick up his parents, Graham and Beryle, before heading to St Andrew’s.

“The matchday experience at Birmingham isn’t great, I don’t like it,” said White. “I drag my parents, who are in their 80s, to Birmingham and we go because it’s been a family tradition to go to football since 1968.

“But it’s not the same as watching us in Coventry. St Andrew’s is an away ground. It’s not our home. There are not enough people there.”

White fears Coventry will miss out on a new generation of fans if the team is not back playing in the city soon. 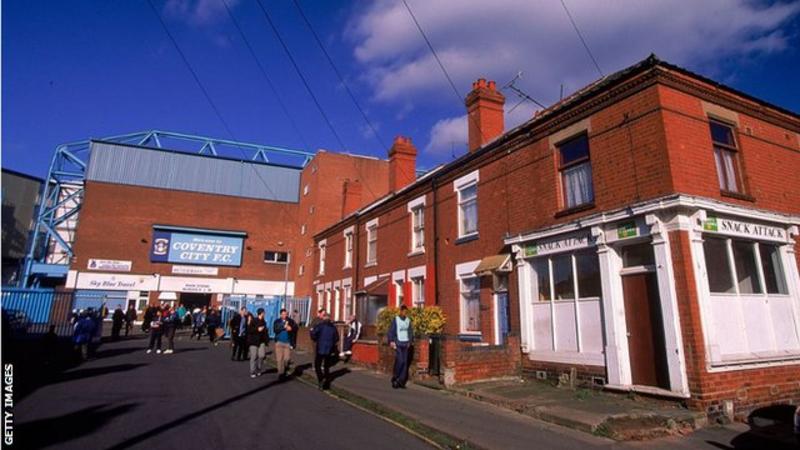 “Young children won’t be watching Coventry City in Birmingham in three years time. By that time the legacy will be gone,” he added.

Coventry, a Premier League club up until 2001 and in the Championship as recently as 2012, spent 2013-14 groundsharing 34 miles away at Northampton because of a rent dispute between Sisu and the Ricoh Arena’s then owner.

“This is equally as damaging,” added Eyles. “Everybody wants to see Coventry playing in Coventry.

“If we are outside the city for years and years, there will be no club to come back to because the fans will find something else to do.”

Having boycotted games at St Andrew’s, will Eyles go if Coventry force a draw against Birmingham – and are officially the away team in the replay at the same venue?

“I’ll more than happily go there as a visiting spectator – not when we are the home team,” he said.

Trade down £2,000 on match days – the businesses left behind

Coventry’s move to Birmingham has proved financially tough for some businesses close to the Ricoh Arena.

The Bull & Anchor, one of the few pubs within two miles of the venue, used to be a popular meeting place for fans before and after matches.

“Sometimes you couldn’t walk in on match days because it was absolutely rammed,” general manager Sean Orner told BBC Sport.

“Quite a lot of our regulars used to have season tickets and would walk to the game from here. Now they just don’t go. They’re not interested.”

Orner says trade is down “at least £2,000” each time Coventry play a ‘home’ game away from the Ricoh.

“You can come here on a Saturday during the day and there’s hardly anyone in,” Orner said. 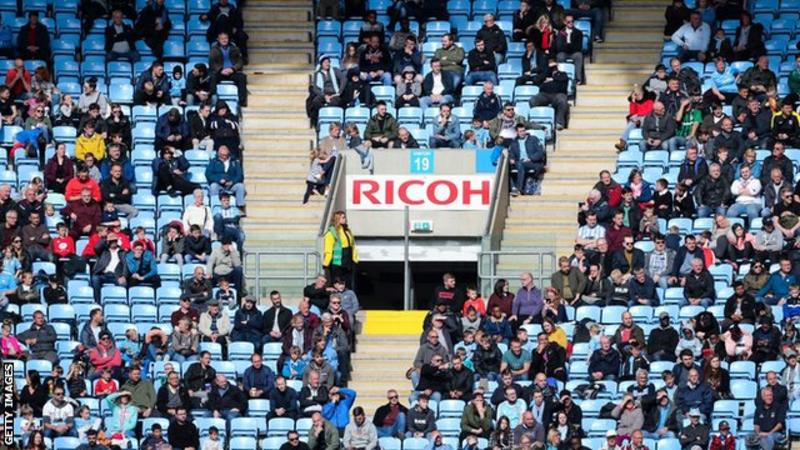 It is a different story for pubs close to St Andrew’s.

A number are benefiting from the groundshare including The Roost, which has been advertising coach travel from Coventry to Birmingham – and back again – for Sky Blues fans on matchdays.

On Saturday, the pub will welcome both Birmingham and Coventry fans. “We believe this game represents a great chance for both sets of supporters to show unity,” said a pub spokesman.

At least one Coventry business is fighting back, though.

Dhillon’s Brewery, based on an industrial estate two minutes’ walk from the Ricoh Arena, organises a 61-seater coach to ferry fans to Coventry matches at St Andrew’s.

“We used to be busy on matchdays at the Ricoh with up to 100 customers depending on who the away team was,” said sales and marketing manager Gordon Mazvihwa.

“Now we open the bar two hours prior to the coach leaving so fans can have a drink. We’re hoping to run three coaches to the cup tie because there’s a lot of interest.

“This period isn’t the proudest moment in Coventry City’s history. It would be nice if they came back to Coventry.”

The away team at home

Saturday’s fourth-round tie could be a disorientating experience for all involved.

Birmingham – officially the away team – will use the visitors’ dressing room at St Andrew’s – their home for more than a century. Blues fans will also sit in the away sections.

For Birmingham’s directors, things will be a bit different too. At ‘home’ games this season, Coventry have branded Birmingham’s hospitality lounges in their own colours.

There are other ways Coventry have tried to make a visit to St Andrew’s feel a bit more like a home game. The club have a portable kiosk in the car park selling merchandise. And instead of using a coach, Coventry’s players make their own way to the ground.

While thousands of fans have decided against travelling to Birmingham this season, this weekend’s FA Cup tie has attracted an “incredible demand for tickets”, according to Coventry. A crowd of about 20,000 is expected – including 9,260 Birmingham supporters – after the two clubs agreed a near 50-50 ticket split. 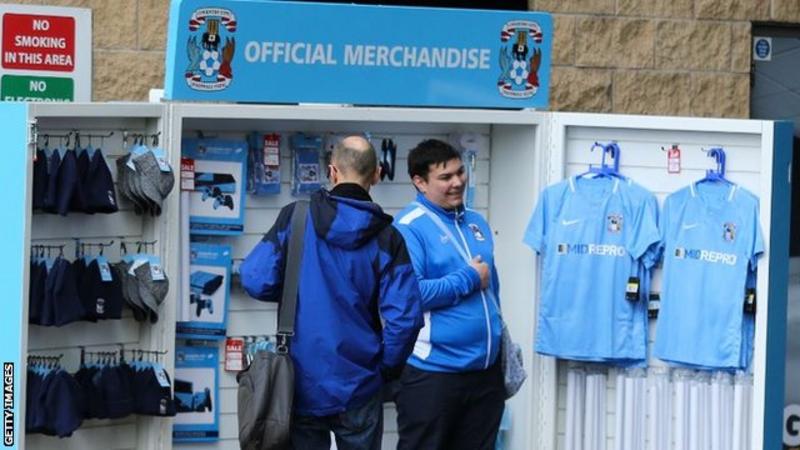 ‘We want to be back in Coventry’

Are Coventry close to returning to the Ricoh Arena, where they have not played since 28 April 2019?

“We want to go back to Coventry as soon as we possibly can,” Sky Blues chief executive Dave Boddy told BBC Sport.

“We’re working with the English Football League and everybody that we need to in an attempt to achieve that.

“The owners have a desire to build their own stadium in Coventry. The EFL has put down a timeline for that.”

As for the groundshare arrangement, Boddy added: “From the owner to the tea lady at Birmingham, they have made us all so welcome.

“I’m sure it will be strange for Blues fans and officials on Saturday.

“Being drawn at home, we have been afforded all the privileges we would get from a home tie, so we will welcome Birmingham’s directors into the boardroom and we have the home dressing room.

“It is a unique fixture. We want to promote it as a game of unity.”

Boddy admits Coventry’s finances are stretched because of their current situation. “You don’t have to be a brain surgeon to work that out,” he added.

“We’re averaging around 6,500 fans, which isn’t bad for a set of supporters who have to travel 20 miles to watch their team for a home game.

“They’re fantastic supporters. That’s not being critical of those that don’t come, because we understand and respect whatever their reasons are for not coming.”