Home » Sport » From the Archives: Why Ian Thorpe had to quit 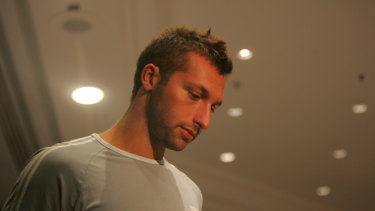 “It’s been a very trying time for me.” Ian Thorpe at the press conference on March 7, 2006 Credit:Steve Christo

First published in the Sydney Morning Herald on March 8, 2006

It took just 12 last-gasp laps in a roped-off section of the Caringbah Leisure Centre for Ian Thorpe's arms and legs to confirm what his heart and lungs had been telling him for weeks – that he was too sick to compete in the Commonwealth Games.

"When he climbed out he was very, very distressed," said his coach, Tracey Menzies, after she and a flotilla of fascinated public swimmers watched him battle chronic bronchitis and other unspecified illnesses in a final effort to prove his fitness.

Neither swimmer nor coach was in any doubt – it was no go.

At 1pm yesterday Thorpe – who admitted he had spent the past few weeks watching more television documentaries and popping more pills than ever before – emerged to announce his withdrawal.

"It's very frustrating. It's very disappointing. It's been a very trying time for me, a very difficult time, realising that the Games were slipping away from me," Thorpe said. 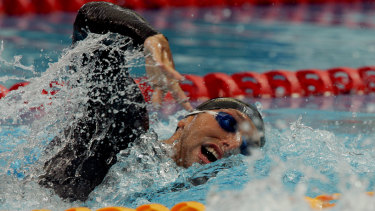 "But I would have done more damage than good if I had competed."

Although he was wearing a designer T-shirt and jeans, had his hair fashionably spiked and sat in front of bottles of his own brand Thorpedo water, Australia's greatest swimmer – with five Olympic and 10 Commonwealth Games gold medals – was barely recognisable. Not the big, bursting-with-life athlete who usually splashes down just before the Games begin, but a vulnerable big kid, peering through dark, red-rimmed eyes, dabbing his runny nose with a tissue, his voice strained, whether by illness or emotion, almost to breaking point.

Only when Menzies hesitated when asked if she had ever seen him in worse shape did he raise a gentle smile.

It's been a very trying time for me, a very difficult time, realising that the Games were slipping away from me.

Such is Thorpe's superstar appeal that his withdrawal is a blow to the Games organisers, the Nine Network, which had been looking to lashings of Aussie gold to boost ratings, and to the men's swimming squad, especially after losing its other big drawcard, Grant Hackett, months earlier.

Menzies has also pulled out of the team to be with her two-week-old baby, Thomas.

Yesterday all parties expressed their sympathy for Thorpe. "Like the rest of Ian's fans in Australia and around the world, we share his disappointment that he will not be competing in Melbourne next week," said the chairman of the Games, Ron Walker.

"We know what a difficult decision it must have been for Ian, but we agree his health must come first." 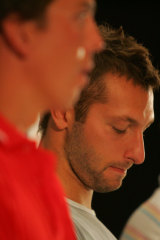 In a further twist of fate, Thorpe will be replaced in two of his events, the 400 metres freestyle and the 1500 metres freestyle, by Craig Stevens, the teammate whose withdrawal from the Athens Olympics allowed Thorpe to swim in the shorter event and win gold.

"I'm very grateful for this opportunity," a nervous Stevens said, adding apologetically that far from feeling he had benefited from "good karma", he felt disappointed at being denied the opportunity of seeing Thorpe compete.

The invalid, meanwhile, looks forward to a full recovery and a return to competition, possibly as early as June. Though the bronchitis had made him susceptible to other infections, his condition had improved in the past few days.

"But it was too little, too late. I'm fatigued. I'm drained," Thorpe said.

Australia's chances in five individual and relay events threatened, though coach Alan Thompson, says only one, in the 400m freestyle, looked a certainty.

Finals are sold out, so impact negligible. "Ian will be missed," says Perry Crosswhite, of the local games association, "but many top-class athletes, including the world's fastest runner will be there."

TV bosses can only guess at the impact on the Nine Network and Foxtel viewing figures, though Thorpe will still host a marathon Simpsons series on Fox8 during the games.

Jon Jones vs Francis Ngannou tale of the tape: How UFC heavyweights compare after P4P great calls out new champ