Manchester City were the biggest winners of the week with a 5-0 victory over Newcastle, while champions Liverpool won 3-1 at Brighton.

Southampton got a 1-1 draw at Everton, Tottenham were held to a goalless draw by Bournemouth. and Burnley won 1-0 at West Ham. 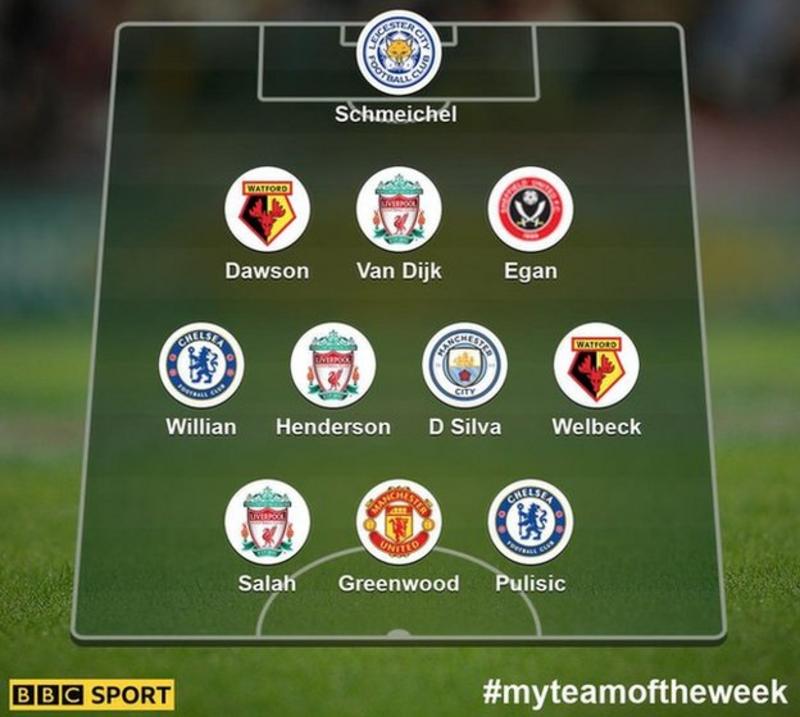 Emiliano Martinez made two excellent saves from Kelechi Iheanacho to keep Arsenal in the game against Leicester. The Argentine has looked solid since he took over from the injured Bernd Leno but it’s Kasper Schmeichel who makes my team of the week. The one-handed save from Alexandre Lacazette was first class and so was his tip over the bar when he was almost deceived by Hector Bellerin, who shaped to cross but hit a shot that almost crept in.

It was Schmeichel’s interventions that not only kept Leicester in the game but earned them the point. The Denmark international has proven himself to be a top-class keeper over the years, but if I was pushed on my all-time Danish XI his father Peter would get the nod. Now he was world class.

Did you know? Schmeichel made six saves against Arsenal. In only two Premier League matches has he made more this season (nine v Manchester City in December, seven v Southampton in January). 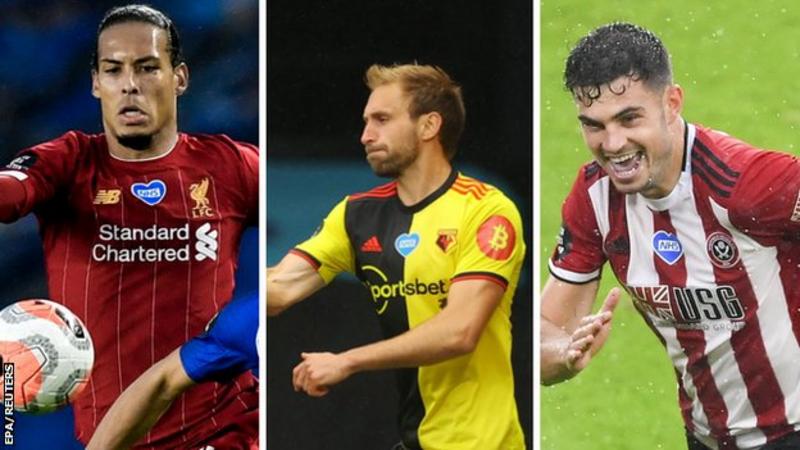 Van Dijk: He looked back to his imperious best against Brighton. Since the restart Liverpool have looked a little shaky at the back. There were two moments where Van Dijk showed his class and both were against Aaron Connolly. The Republic of Ireland striker came on and understandably tried to impose himself on the game. Van Dijk either dispossessed him, outran him or outplayed him. I hope Liverpool boss Jurgen Klopp had a quiet word with the Irishman after the game and told him not to worry – Van Dijk does that to everyone.

Did you know? Van Dijk has started Liverpool’s last 85 Premier League games in a row. This is the longest run of consecutive starts ever made by an outfield player for Liverpool in the competition.

Dawson: He’s done it again. He’s pulled another goal out of nowhere and given Watford a Premier League lifeline. Craig Dawson scored a spectacular overhead kick against Leicester City recently and now added to his tally with a nice far-post header against Norwich. Not bad for a centre-back who is neither prolific nor clinical when it comes to scoring goals. Boy, did Watford need this victory. Defeats against Southampton and Chelsea were bad enough but the victory against Norwich has put the Hornets back in business.

Did you know? Dawson has scored two goals in five Premier League appearances since the June restart. He hadn’t found the net in 20 league appearances for the Hornets this season beforehand.

Egan: What a way to win a football match. A set-piece, a thundering header with no time for Wolves to respond. Two goals in as many games for John Egan took Sheffield United above Arsenal and Tottenham. If I was the chairman of either north London club I would be fuming considering the difference in wage bills compared with their Yorkshire rivals. Credit where credit is due, Blades boss Chris Wilder did say he couldn’t wait to shake up the Premier League a little. He’s done much more than that, he’s frightened the life out of one or two.

Did you know? Egan scored only Sheffield United’s second ever 90th-minute winner in the Premier League, following in the footsteps of fellow defender Phil Jagielka in September 2006 against Middlesbrough. 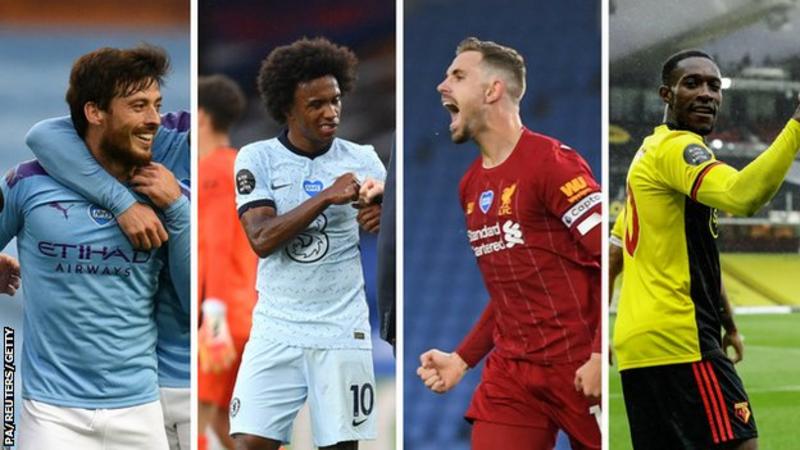 Silva: A great era is slowly coming to an end. David Silva will be leaving Manchester City at the end of the season but I sense not before he adds yet more silverware to his cabinet, as he still has an FA Cup semi-final to contemplate and the possibility of lifting the Champions League trophy. He strolled around Etihad Stadium against a tormented Newcastle like an emperor. With more than 300 Premier League games, 59 league goals and 11 domestic trophies under his belt with City, he can do whatever he wants.

Did you know? Silva has now reached 10+ assists in all competitions in all 10 of his seasons with Manchester City, with his second against Newcastle his 121st in total for the club.

Willian: I think Yaya Toure’s done it, Steven Gerrard’s definitely done it and I know Kevin de Bruyne and Virgil van Dijk have done it. All have made my team of the week on three consecutive occasions. In fact Van Dijk might even have made it on four.

Willian now joins this outstandingly consistent group of players. The Brazilian was at the heart of yet another successful performance by Chelsea, this time against Crystal Palace. Frank Lampard needs to think long and hard before letting Willian leave Stamford Bridge. I don’t thing Ross Barkley, Mason Mount or Ruben Loftus-Cheek are ready to replace him so he’d better have someone in mind who can.

Did you know? Since the Premier League resumed in June, Willian has either scored (four) or assisted (two) six league goals in five matches – as many as he was involved in across his previous 19 league appearances beforehand.

Henderson: Barely eight minutes had gone and the game was over. Liverpool punished Brighton for having the audacity to think they could outplay the champions. If the Seagulls thought their visitors had come to the south coast to quietly see out the season, such ideas couldn’t have been further from the truth. Jordan Henderson, my player of the season, epitomised Liverpool’s ruthlessness with an excellently taken goal. By the time Brighton realised the mood Liverpool were in, the game was over.

Did you know? Liverpool captain Henderson has scored more Premier League goals in 2019-20 (four) than in his previous three seasons combined before this (three).

Welbeck: What a winner by Welbeck. I must be honest, I didn’t think he would be featuring in my team of the week but his goal against Norwich was just too good. Welbeck has suffered a string of unfortunate injuries this season and just when he was coming into some form. However his addition into the Watford starting line-up couldn’t have come at a better time. Watford need goals and the former Arsenal and Manchester United striker is capable of getting them. You don’t play for either of those clubs unless you’ve got something to offer.

Did you know? Welbeck scored his first Premier League goal since August 2018, when he scored for Arsenal against West Ham. It was his ninth attempt at goal for Watford in the Premier League this season. Pulisic: What a finish. The way he stood up Palace defender Joel Ward before firing an unstoppable left-foot strike past Vicente Guaita was quite brilliant. The USA international has been in sparkling form recently and was very unlucky not to make my team of the week after Chelsea’s win over Watford. Pedro now seems surplus to requirements at Stamford Bridge and it’s hardly surprising when Frank Lampard has Pulisic in his ranks. Provided the American can remain fit, Chelsea have a player who can make goals as well as score them.

Did you know? Pulisic has scored six away league goals for Chelsea this season – this is the most ever by an American player away from home in a Premier League season, overtaking Clint Dempsey’s five in 2011-12.

Salah: Two goals against an outclassed Brighton has put Salah back in contention for the coveted Golden Boot award. At the moment the trophy is contested by Pierre-Emerick Aubameyang, Jamie Vardy, Danny Ings and Salah. The Egypt international looked desperate to get his hat-trick against the Seagulls and should have done when he missed a sitter in the final minutes. Liverpool played this game as though the title was still at stake. They looked like champions and played like it.

Did you know? Salah has reached 100 goal involvements for Liverpool in the Premier League (73 goals, 27 assists in 104 appearances), becoming just the fourth player to do so for the Reds after Steven Gerrard (212), Robbie Fowler (158) and Michael Owen (148).

Greenwood: The way he is taking his goals at the moment is quite phenomenal. His 45th-minute strike flew past Pepe Reina before the keeper even had time to set his position. Once Greenwood put United 2-0 up they never got out of third gear. They didn’t need to. However when you’re at the foot of the table and fighting for your life you really can’t afford the big decisions to go against you. Had Jonathan Moss not awarded United a bogus penalty, Villa might have made something of the fixture. But the reality is Villa lack a Mason Greenwood and that’s why their days in the Premier League are numbered.

Did you know? Greenwood is the fourth player aged 18 or younger to score in three consecutive Premier League appearances, after Danny Cadamarteri (1997), Michael Owen (1997 & 1998) and Francis Jeffers (1999).

The Crooks of the Matter

I see VAR has not improved. Or should that be the people behind the technology, making the decisions, have not improved. I really don’t understand why VAR has to get involved on matters that is none of its business. We were originally told that VAR would only get involved when clear and obvious mistakes were made. However what VAR’s interventions are demonstrating is a lack of courage and a total abdication of responsibility by the referee.

Harry Kane’s disallowed goal against Sheffield United because of Lucas Moura’s handball was, in the words of pundit Jamie Redknapp, one of the worst decisions he’s ever seen. I couldn’t agree more. Not only was it a shocking decision, it didn’t take into account that Moura was fouled and tried to break his fall by putting his hand out. The referee waved play on and was right to do so.

Why VAR felt the need to poke its nose in, where it is not wanted or required, I don’t know. Technology might be in a position to identify when a ball strikes a hand but what it can’t do is apply context because it’s a machine. That’s the referee’s job.

Referees are also there to apply clarity and understanding to a situation on the football field, not simply administer the law. And what has happened to the referee’s opinion? Does he no longer have one? Chris Kavanagh, quite rightly, booked Arsenal’s Eddie Nketiah for a clumsy challenge on Leicester City’s James Justin. To then allow VAR to intervene, when it was not a clear and obvious mistake, is not what we were originally told. It is undermining the game and eroding the referee’s authority.

There has even been one case where VAR took as long as four minutes to make a decision. That’s more time than a heavyweight boxer is given to knock out his opponent. VAR’s excesses must be curtailed.

Conor McGregor vs Vince McMahon with winner getting rights to billionaire strut a ‘match made in heaven’, says Triple H – The Sun