That's why Rota is confident her Maori outfit won't be on the wrong end of a vocal home crowd when they take on the Indigenous All Stars on Saturday afternoon at Robina. 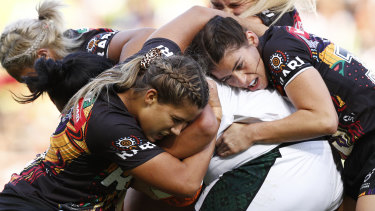 Krystal Rota of the New Zealand Maori Ferns takes on the Indigenous defence in 2019.Credit:AAP

After an 8-4 win in the same fixture last year at AAMI Park in Melbourne, the New Zealanders are ready to go back-to-back and expecting more than a few cheers should they get the job done again.

"Definitely. We've got quite a bit of family around here as well. Because there is so much culture here, there should be a good crowd to come and support both of our cultures," Rota said on Friday.

The week has been a celebration of the teams' Indigenous and Maori heritages and while that remains paramount to the lead-up, the natural competitive drive of the players ensures it's far more than an exhibition game.

The 2019 edition was short on points but long on heroic defence and high-pressure attack. The Indigenous side managed to stay within four points despite giving away 17 extra sets.

"I'd like to see both sides throw the ball around a bit more. It was a pretty good defensive effort from the Indigenous girls last year," said Ben Jeffreys, the coach of the Indigenous squad.

"You couldn't fault their effort when the Maoris had 17 extra sets, so to be 8-4 down at the end of the game was a courageous effort. I'd like to see more of an open game, so hopefully that's what we get."

Maori coach Rusty Matua enjoyed the victory last year but felt his players left some good rugby league in the tank. Put simply, they could have done better, regardless of the scoreline.

And with a more immersive cultural experience for their Australian-based players this time around, that's exactly what he hopes to see on Saturday.

"We felt very happy that we won but we felt we could have played better. That's been a big focus. They've all come back fitter and determined and more focused," Matua said.

"We were lucky to have our girls based in Australia come back for a camp in New Zealand. We didn't have that opportunity last year. This year's preparation has been so much better for our team, all our Aussie players came back and experienced that Maori culture."