Home » Sport » Gone fishing: The kingfish is back. Long live the kingfish.

For the first time this season, consistent numbers of legal-size kingfish are showing up at the iconic island off Narooma, and anglers couldn’t be happier. 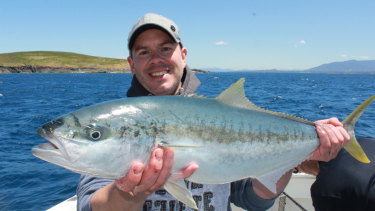 Long live the king! The kingfish have finally returned to Montague Island.

The fish are about 70 centimetres and, when they’re on, are being caught in large numbers on dead-baits, live-baits, soft plastics and jigs.

Charter boats are getting more than a dozen legal fish per drift, which is terrific angling in anyone’s book.

Out wide there are plenty of marlin, dolphin fish and mako sharks.

Don’t get me wrong, I love snapper. They’re fun to catch and even better to eat.

But when they’re 20cm long and in their thousands, they do get a bit tiresome.

In the Moruya River, for instance, they’re pouncing on everything anglers throw into the water.

Even though they’re all under-size, they give a good account of themselves on light gear and are tremendous fun for junior anglers who are simply content to catch a fish.

If you can get a lure past the pinkies, there are flathead about in the river. They’re following schools of ravenous chopper tailor, feeding on the leftover scraps.

Get a soft plastic to the bottom and you’ll eventually get hits. Soft plastic wrigglers in natural colours seem to be working best.

Fishing on the Clyde River has really picked up. Some monster mulloway and flathead have been caught from the deeper sections between the Bay and Nelligen on lures and live-bait.

The oyster racks are fishing well for estuary perch, bream and flathead on a variety of lures.

Surface fishing has slowed a bit because of the cooler weather, but hard-bodied divers and plastics worked around structure are still working a treat.

Bear in mind that just about every system is crystal clear at the moment because it’s been so dry in the catchments.

This means making some adjustments, such as opting for lighter leaders, smaller jig-heads and sinkers, and employing longer casts.

In the mountains, the trout have gone deep. Very deep.

Anglers fishing Eucumbene or Jindabyne are finding fish up to 45m below the surface. Trolling Tasmanian Devils on lead-core line or via a downrigger is the way to go.

The streams are pretty low but there are a few browns about that are willing to take dry flies.

Locally there’s no shortage of redfin in the urban lakes, with a few thumpers bigger than 35cm reported.

Cod and golden perch are on offer in Burley Griffin and Ginninderra if you’re prepared to focus your efforts from dusk onwards.