Australian gymnast Kate McDonald has celebrated her 22nd birthday with a shock gold medal in the Commonwealth Games beam, relegating her star teammate Georgia Godwin to second on the podium.

Australia’s artistic gymnasts snared five medals on the final day of competition at Arena Birmingham – one gold, two silver and two bronze – in a late flurry of success at the Games after a horror year for the sport in Australia.

The team finished second overall on the medal count behind an England outfit that dominated both the men’s and women’s competitions. 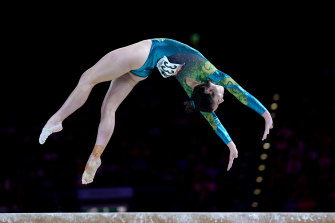 Kate McDonald during her golden performance.Credit:Getty

Having been handed a surprise spot in the final just 12 hours earlier, Tyson Bull came agonisingly close to delivering the Australian men their first gold medal of the competition, winning silver on the horizontal bars.

Bull was gifted a spot the night before the competition when teammate Clay Stephens generously withdrew because he thought the Tokyo Olympian would stand a better chance of winning a medal.

Godwin, who was looking to continue her remarkable golden run, looked poised for another victory when she laid down a marker of 13.433 in the first routine of the program. But five competitors later, McDonald recorded 13.466, leapfrogging her teammate with a routine that had a lower difficulty but higher execution.

It was the Victorian’s first gold Games medal after earlier winning team silver – and it completely took her by surprise.

“It was an absolute shock, if I’m being completely honest,” McDonald told reporters after the medal ceremony.

“I just had nothing to lose, so I just tried to have as much fun as possible and just soak it all in and, well, here we are.”

A shocked McDonald even admitted feeling a little sad that she’d upstaged Godwin, who concluded her campaign with gold in the all-around and vault, plus silver in the uneven bars, beam and teams event. 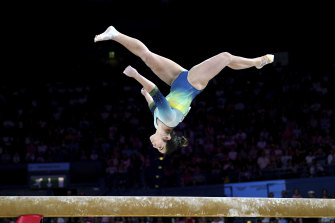 Godwin’s five medals in Birmingham and three on the Gold Coast saw her equal Allana Slater’s record for most career medals at the Commonwealth Games by a female Australian gymnast. Godwin has won the most golds at a Games since Lauren Mitchell’s three in Delhi.

“I did feel a little bit sad in that sense, but you know, she’s an amazing teammate,” McDonald said of Godwin. “But it was just great to be on the podium, both Emma (Canada’s bronze medallist Emma Spence), Georgia and myself.”

Godwin said she was thrilled with her young teammate’s performance and had no regrets about being demoted to silver following a gruelling few days of competition.

“She put up the performance of a lifetime when it counted, so she deserves the gold, and I’m happy for her,” Godwin said.

“We’ve got some incredible athletes on the team who are very new to the senior scene. So give them a couple of years, and they’re going to shine … watch out!”

Bull, 29, finished fifth in the high bar in Tokyo but bombed out in his pet discipline in the team event and individual qualifying on Monday morning. He earned a reprieve when Jesse Moore withdrew with a shoulder injury and Stephens opted out to open up a spot for Bull.

Hampered by an ankle injury, Bull recorded a stunning 14.233, which kept him in first place until the final competitor, Cypriot Ilias Georgiou, returned a score of 14.466 to clinch gold.

He said Stephens had the “biggest heart in the world”, describing the South Australian’s decision to withdraw as “a selfless act.”

“I gave Clay all the space he needed, it was a huge decision he had to make. And there was no wrong decision. I was never going to ask for the spot because I knew he deserved it. So, it just kind of speaks to … the kind of guy he is.”

Earlier in the competition, James Bacueti claimed bronze in the men’s vault to end Australia’s men’s medal drought. He was part of the men’s team that finished fourth, but turned it on in Tuesday’s vault final to claim bronze on 14.283 behind England’s Jake Jarman (14.916) and Giarnni Regini-Moran (14.633).

“This is a moment I’ll remember for the rest of my life,” Bacueti told reporters.

“It was probably the most stressful couple of minutes of my life. That second vault, I probably thought I hadn’t done enough. It wasn’t my best showing.”

Victorian Emily Whitehead finished a thrilling day for the Australians with a bronze behind gold medallist Alice Kinsella and silver medallist Ondine Achampong, both from England, on the floor.

City move up to fourth with win in Adelaide, find form ahead of derby