The Hockeyroos have verifiable belief they can do anything at the Tokyo Olympics after a remarkable final-second equaliser and penalty-shootout win over bogey team Belgium.

Australia hoped Saturday's Pro League opener at Sydney Olympic Park would prove an ideal dress rehearsal for the pressure-laden environment they will encounter in six months at the Tokyo Games. 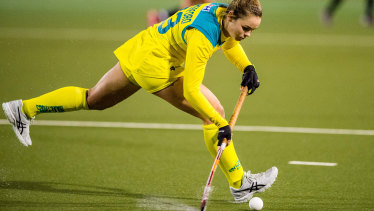 The drama-packed contest didn't disappoint in that sense.

Kalindi Commerford struck a final-second equaliser before goalkeeper Jocelyn Bartram held her nerve as the Hockeyroos prevailed 4-2 in the shootout.

The Hockeyroos put themselves under the pump and looked like paying the price for a second-half lapse, during which the visitors scored three goals to seize a 3-1 lead.

Australia rallied to conjure up two goals in the final 90 seconds.

"The Olympics is very unpredictable," Hockeyroo Steph Kershaw said after making her international comeback from a second knee reconstruction.

"Having that sort of win in the bank [is helpful] and knowing that if we are down, that the game is not over until the 60 minutes are up.

"It's really exciting for us to play our best hockey in the last five minutes.

"Shootouts are such a big part of the game and … I'm sure at the Olympics there will be a lot more shootouts happening."

Commerford, who has pledged to donate $100 for every goal she scores this weekend to a bushfire appeal for her hometown of Milton, sent the game to a shootout in the most dramatic fashion possible.

Australia played the dramatic final seconds without a keeper and Commerford's goal, which came after a pinpoint pass from Jane Claxton, was only given the all clear after a video review.

"Our team isn't the sort of team to claim a goal that wasn't a goal.

"When Kalindi said, 'I definitely touched it', we all backed her. I think you could see on the video replay pretty clearly she got the touch."

Belgium's Ambre Ballenghien and Charlotte Englebert failed to score in the shootout, while Brooke Peris, Malone, Amy Lawton and Claxton all found the back of the net for Australia.

Australia, finalists in last year's Pro League and tipped to be medal contenders at Tokyo 2020, dominated the opening half but only had Malone's opener to show for it on the scoreboard.

Belgium were the only side to defeat Australia twice in last year's inaugural Pro League.

The sides clash at the same venue on Sunday, while Australia's Olympic campaign starts on July 26 against Spain.

Trump now has a chance to dodge his health care record in 2020. Will Democrats let him?