Home » Sport » How Barcelona will line up under Xavi with thrilling attack of Lionel Messi, Jadon Sancho, Neymar and Serge Gnabry – The Sun

SURPRISINGLY, Barcelona haven't managed to win the Champions League since 2015, but what changed after their last triumph? 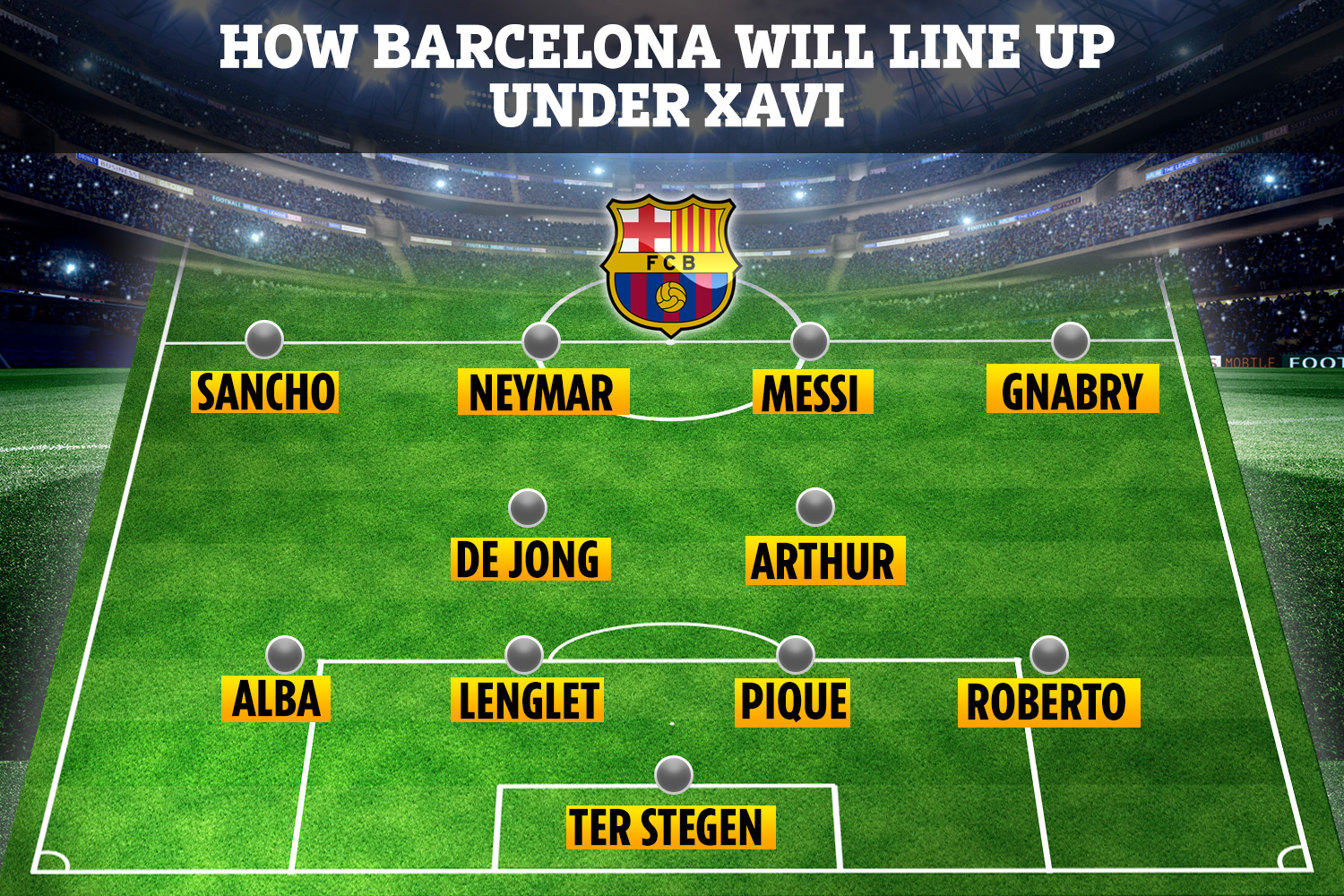 While it's true that he was no longer a key player in his final season, featuring for just 36 minutes over the course of the semi-finals and final – Xavi's departure marked the end of the remarkable midfield built by Pep Guardiola.

But the 5ft 7in schemer could return to the Camp Nou to restore the ultimate glory to a club that was soaked in it during his playing days.

Despite turning down the opportunity to replace Ernesto Valverde in January, the 40-year-old has been discussing his future as a future Barcelona boss.

And if the players he'd like to sign are anything to go by, he seems hell-bent on bringing ultra-attacking football to his old stomping ground.

Currently managing Al-Sadd in Qatar, he told Spanish newspaper La Vanguardia: "I would sign wingers, like Neymar – I don’t know if he would fit in due to the social issue, but football-wise I have no doubts it would be a spectacular signing.

But how would he be able to fit Neymar, Sancho and Gnabry into the same team, while squeezing out the remaining peak years of Lionel Messi?

For games against lesser sides, it could lead to a deadly, all-out attack 4-2-4 system, with Lionel Messi floating around the other three doing whatever he likes.

And the thought of the Argentine feeding Gnabry, Sancho and Neymar leaves you convinced that they would score a bucket-load of goals.

But in games against better teams, Xavi would likely revert back to the classic, Cruyffian 4-3-3 that is in Barca's DNA.

Neymar and Messi would be certainties to play – with Gnabry and Sancho fighting it out to start on the other wing. 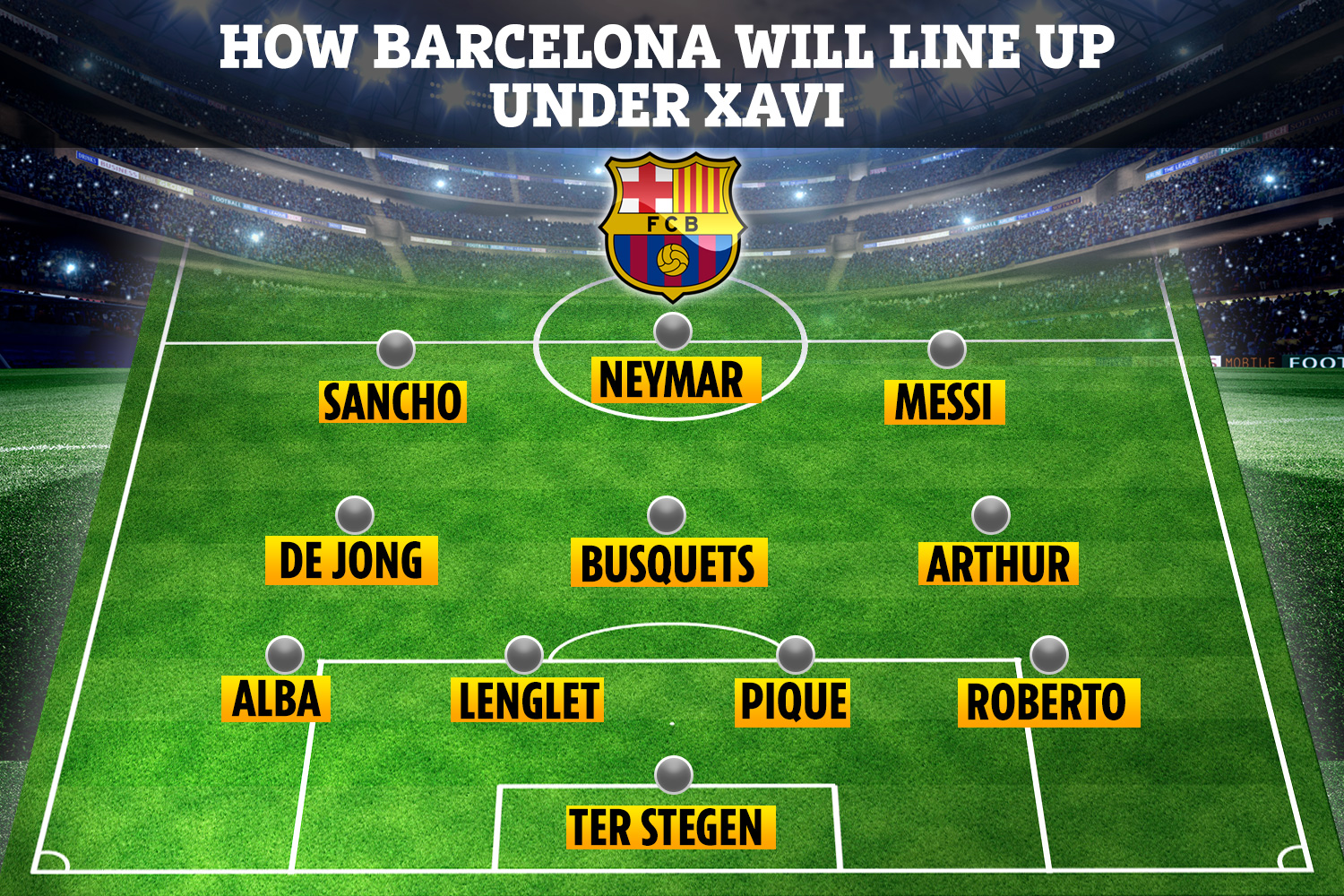 Behind them, Sergio Busquets is the last survivor of the classic Guardiola-era midfield – while you have to imagine that Xavi would love Frenkie de Jong and Arthur alongside him.

Clement Lenglet has impressed with his ability to play out from the back – while Xavi believes that Marc-Andre ter Stegen is the best goalkeeper in the world.

There would then also be the opportunity to maximise the talents of younger players like Ansu Fati, and whether he could help to fulfil Ousmane Dembele's undoubted potential.

To complete a sensational return, however, Xavi has insisted that the dressing room would have to be free of toxicity.

The 2010 World Cup winner said: "I am clear that I want to return to Barcelona, it gives me a lot of excitement.

“Now that I have seen myself coaching I think I can bring things to the players.

But I made it clear to them that I saw myself in a project that started from zero and in which the decision-making was mine.

“I would like to work with people I trust, with very valid people there is mutual loyalty.

“There can’t be anyone toxic around the dressing room.”

Xavi finished his playing career with Al-Sadd in the Stars League, before taking over as manager upon his retirement in 2019.

Under his tutelage, the team have won the Qatari Cup – and reached the semi-finals of the Champions League.

He couldn't replicate his successes with Barcelona, however, as they crashed out 6-5 on aggregate to Bafetimbi Gomis-inspired Saudis Al-Hilal.