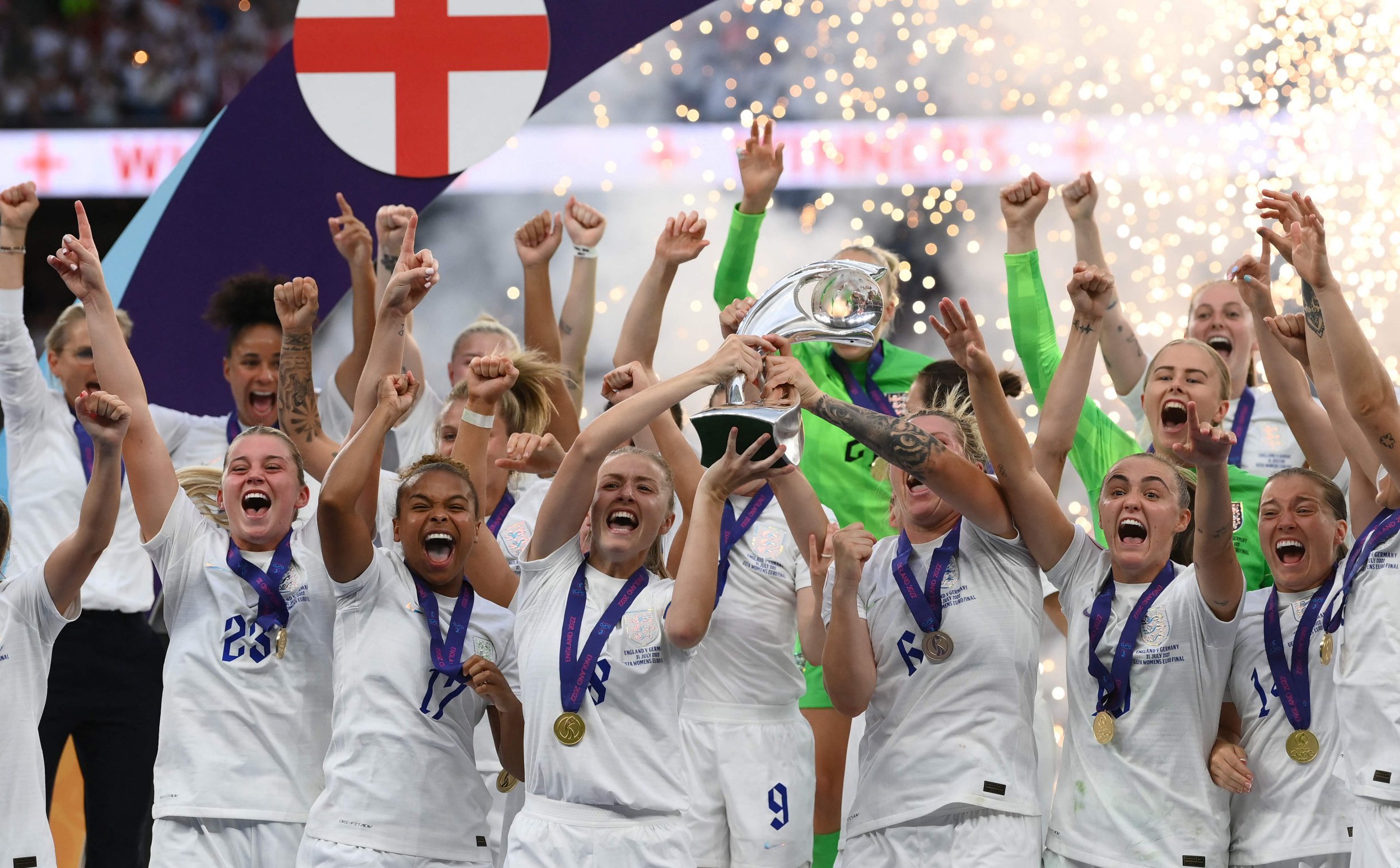 I can’t tell you how many stories I’ve heard of parents not letting their kid play football because they ‘don’t want them to become a lesbian’.

Or how many times I’ve been told anecdotes of young people – who are stars on the pitch – being shamed for their butchness after the final whistle.

These regressive attitudes show that sexism and queerphobia cannot be separated – and must be fought together if we want to create a world where we’re all free to play the sports we love.

Thankfully, the England Women’s Euros team triumph will help to break down this stigma and it’s a monumental step forward for the women’s game in the UK.

The Lionesses’ win was a victory for queerness and LGBTQ+ inclusion. Seven players in the team are openly gay or bi, which is more than the number of out players in the entire men’s football pyramid.

For me —and many other queer people — the win was personal.

I played football for most of my childhood in the 90s and credit much of my personal strength to the skills I learned in youth sport.

Unfortunately, when I was 12, I left a team after a year of bullying from some teammates which, looking back on now, was homophobic.

I was a powerful defender on the pitch — taller and stronger than most my age. Although this was a bonus during play – it came alongside names like ‘beast’ and ‘lezzer’. I didn’t even know what a lesbian was, but I knew I didn’t want to be one.

The bullying spread to school, where other kids caught on and called me the same names. I was fortunate that I was able to join a different team and thrive in the inclusive environment they offered, but many aren’t so lucky.

The truth is that too many young women – in schools, universities, and youth academies – are pushed out of playing the game they love because of who they are. Whether it’s experiencing homophobic slurs on the pitch, being banned from playing, facing tormenting rumours about their sexuality in the locker room or being forced to cover up their queerness, women’s sport is still not a safe space for queerness.

A ground-breaking survey released earlier this year showed that over a million girls in the UK lose interest in sport as teenagers – 68% said they feared feeling judged and 61% said they lacked confidence. I wonder how many of those talented young people felt judged for being LGBTQ+ or feared being labelled part of our community.

We rightly talk about misogyny in this area but, when we do so, we can’t ignore the presence of homophobia, biphobia and transphobia that lingers.

The toxic combination of anti-LGBTQ+ attitudes and sexism create a world where gay, bi, and trans women face hurdle after hurdle in their quest to compete.

In 2022, it shouldn’t be like this – and it doesn’t have to be. Cultural change is never fast but it starts by dismantling the attitudes that hold us back.

Crucial to this is breaking down the gendered stereotypes. Coaches, teachers and parents need to foster an environment where girls can play football and boys can play netball.

By breaking these barriers down, we open up opportunities for all young people to get involved in activities inspire them and help diminish the gendered stigmatisation of LGBTQ+ identities.

We must support coaches, teachers and parents to actively challenge bullying. Stereotypes are often drilled into us from an early age so it’s vital that we help our kids dismantle them and see physical exercise as an open space that they’re free to explore.

It’s also important that we don’t shy away from celebrating LGBTQ+ athletes of all backgrounds who often don’t get the same treatment, sponsorship opportunities or praise as their straight counterparts.

As I got older and continued my journey, I was encouraged by the brilliant queer women I had around me. Knowing that they were like me, loved the game I loved, and were respected because of their successes went a long way in building my confidence as an athlete.

I also had coaches who were incredible allies and understood their role in supporting diverse groups. But too often – even now – LGBTQ+ coaches and allies are told to edit ourselves when we should be able to be openly ourselves.

I love sport because it has the unique ability to bring people together – of all ages, backgrounds, genders, ethnicities and faiths. Our work at Stonewall focuses on ensuring that legacy continues so that future generations can see their full selves celebrated whatever their victories – at school, at university or at Wembley.

As I sat at Wembley stadium watching the Lionesses with my wife and friends, we realised that I was the only one of the six of us who was even given the chance to play football beyond primary school.

I got to choose what I wanted to play – football and lacrosse – but they were all forced down pathways based purely on their gender and not on their own choices or talents.

It’s sad that our current system relies on stereotypes to dictate what young people should and shouldn’t play. Part of the joy is finding what inspires you.

Sport has the power to change minds and change the world, but it can only do that if we’re all free to participate as ourselves.

Cocaine and cannabis use will lead to shorter bans