Home » Sport » In a Transplanted Final, Even the Copa Libertadores Is Sanitized

MADRID — Pity Martínez, his legs like lead, took a deep breath. After 120 minutes of impossible tension, after a journey of 6,000 miles, after a game that had lasted a month, there was one more run to make.

So he ran. Away from the last vestiges of resistance Boca Juniors could muster, away from all the turmoil and strife that had enveloped the final of the 2018 Copa Libertadores, and into the wide green expanse of Santiago Bernabéu, toward the unguarded goal, toward a place in eternity.

Behind him, a sea of red and white bounced and broiled, urging him on, waiting for that moment of release, of certainty: for the third goal that would seal River Plate’s 3-1 victory — and, just as important, Boca’s defeat — and ensure that, for the fourth time in its history, River would be the South American champion. This one, though, will always mean the most. Nothing else will ever really compare.

How could it? It was all too perfect: beating Boca, its counterweight in the Great Schism that defines Argentine soccer, its opposite pole in perhaps the fiercest rivalry in world sport; seizing the chance — in that moment that Martínez rolled the ball into an empty net — not only to savor its own ecstasy but to taste Boca’s pain, each sensation feeding on the other, swirling, metastasizing.

And to do it here, in Madrid, in Europe, this most intimate of hatreds turned, for one night, global, so that becoming champion of South America felt like conquering Europe.

Long after the final whistle had blown, long after all but River’s most ardent fans had left the Bernabéu, the team’s captain, Leonardo Ponzio, placed the Libertadores trophy at the stadium’s center circle and gathered his teammates around it. They clasped hands, and they danced at the center of the soccer world. Their eyes did not leave the prize they had won. No, there will never be anything like this again.

Perhaps that is for the best. As much as River will cherish it, treasure it, immortalize it in song, and as much as this felt like a significant moment for South American soccer — proof that it retains the appeal to gather 62,000 people in one of Europe’s great stadiums at 10 days’ notice — this was as much a warning as a celebration.

It should not be forgotten that this game was held here, and not in Argentina, because two weeks ago, the bus carrying Boca to River’s Estadio Monumental was attacked by a handful of River fans, shattering its windows, sending shards of glass at Boca’s players, exposing them to the acrid tang of pepper spray. 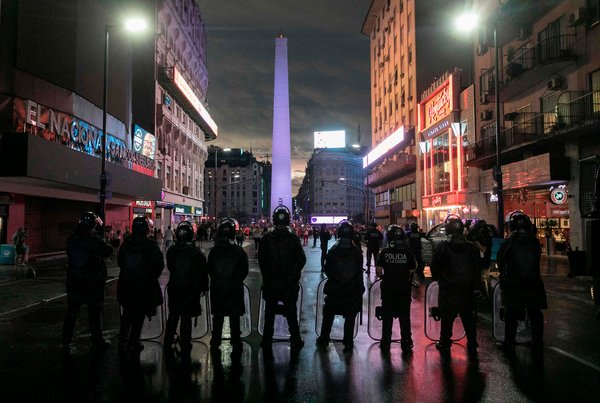 Nor will it be, at least not while Boca Juniors have an appeal lodged with the Court of Arbitration for Sport that, if successful, would see River forced to forfeit the trophy, turning the most precious triumph in its history into the most bitter defeat.

More than that, though, it was at the whim of Conmebol — after twice pressuring the teams to play that same weekend — that Argentina was stripped of the right to host the biggest game in its history, the game that had become known as the Final to End All Finals, against the wishes of the Argentine government and both clubs.

They did so, in part, because of Spain’s large Argentine community, because of the frequent flights from Buenos Aires, and because they thought that only in Madrid — and perhaps Miami, though that option never extended beyond fantasy — could they stage the game safely while preserving so much of the flavor that makes Argentine soccer distinct.

But just as the act of observing something distorts it, so too does moving it. Soccer — any sport — cannot be transported wholesale, airdropped somewhere else, and retain its true nature. It cannot be separated from its context and remain the same.

Conmebol, the governing body for South American soccer, will regard this final, this opportunistic experiment, as a success. Fans had been flying into Madrid for days, not just from Argentina but from across Spain and the rest of Europe. On Friday night, thousands of River fans gathered at Plaza Mayor, in the heart of the city, as a show of strength, a little piece of Argentina in Europe’s cobbled squares.

On Saturday morning — just as they had in Buenos Aires the day the game was supposed to be played — fans in the red and white of River and the blue and yellow of Boca strolled in the winter sunshine at Plaza Mayor and at Puerta del Sol, mingling happily with the Christmas shoppers, with one another.

Madrid’s unofficial economy had stirred itself for the influx. Outside the Bernabéu, fans could buy half-and-half scarves, that great symbol of the gentrification of the game in Europe. Perhaps through novelty, or plain old-fashioned bafflement, they were selling well.

Downtown, the stores that usually make their money selling trinkets to tourists had rolled out passable fakes of Boca and River jerseys; they had offers on commemorative T-shirts and sweatshirts and hats. The flags, the colors, of Boca and River ran together.

Spain’s security services had taken every possible precaution, under the circumstances. The main drag of the Paseo de la Castellana, the eight-lane highway that skims the Bernabéu, was closed all day. An area to its north had been reserved for River fans; Boca’s had a spot to the south. Each had stages for live music, vendors offering food and drink. The idea was that, once inside, the fans would have no reason to leave, no chance to mix. When they eventually headed to the stadium, they had to pass through three security checks.

Spain was not a passive force in this; there was a reason Real Madrid had made the Bernabéu available, free of charge, when Conmebol’s president, Alejandro Dominguez, had suggested playing the game in Madrid. Argentina, with Uruguay and Paraguay, wants to host the 2030 World Cup. So, too, does Spain, alongside Portugal and possibly Morocco. Hosting the game Argentina could not manage offered a powerful parable.

But it all seemed a little overbearing, as the fans wandered around the city together. Conmebol had the occasion it wanted, and one Argentina — even at one remove— deserved: a convivial atmosphere, one not marred by violence, and compelling to soccer’s great and good. Lionel Messi was here, in one of the Bernabéu’s executive boxes; so was Antoine Griezmann, in a Boca jersey, and much of the Juventus squad.

It got the game it had hoped for, too: Boca taking an early lead on a brilliant breakaway goal from Darío Benedetto, and then River hitting back, no less stylishly, through Lucas Pratto. If the quality was a little absent, the drama was not. Extra time loomed, the final to end all finals again becoming the final that would not end.

Only when Juan Quintero curled home, expertly, from the edge of the box did daylight appear. By that stage, one Boca player had been sent off, and another removed through injury. It had just nine players. It could not resist. And in the dying seconds, Martínez raced clear, his place in immortality waiting.

And yet, there was something missing. These were two Argentine teams, full of South American players, in front of a crowd of largely Argentine fans. It was not, though, a purely Argentine game so much as a sanitized, defanged version, some of its soul left behind somewhere over the Atlantic.

That is not entirely a bad thing. No stadium in Argentina can match the Bernabéu for modernity, for comfort; it is not always a negative to treat fans like customers, with the respect that entails, though it does tend to come at too much of a cost. The security operation, too, felt more respectful, smoother, less high strung.

But nor is it an altogether good thing, a European lesson for the South Americans to learn. Through one lens, this game was a warning for the future, the opening of a door to an era when UEFA, Conmebol’s European counterpart, feels at liberty to move its Champions League final outside Europe, if showpiece games are made available to the highest bidder.

But through another, it is the completion of the past, of the gentrification of soccer that has also swept through Europe over the last 20 years and that has served to take an organic, authentic passion and repackage it in a way that is more palatable, more readily consumable, more easily marketed.

South America has not been immune to that, but it has managed to stave off its worst excesses. It has retained its passion and its color, what to European eyes looks like its authenticity — the good; and, as those River fans on the corner of Avenida Monroe proved two weeks ago, it has kept the bad, too.

But, just as in Europe, all of that exists only in its context. It cannot be moved without being changed. In the Bernabéu, against the bright green of that perfect field, the colors seemed a little duller; in its steep stands, the noise was a little quieter. This was the Copa Libertadores, the Superclásico, but a doctored, Disney version: less exotic, more European; its tarnishes buffed, its edges smoothed.

None of that will detract from River’s victory. None of it will draw the elation from Martínez’s moment. Nor will it worry Conmebol, not particularly; this, after all, is just what it had wanted, a polished finale to a month of chaos. South America, the Copa Libertadores, at last, has a champion. For River, there will never be another game like this. For the rest of us, though, there will. There will be many, many more.

Tim Hardaway Jr.: It wasn’t my decision to leave Knicks