Home » Sport » In all earnestness, Langer is a law unto himself and the end is nigh

Which brings us to the Justin Langer situation.

We know he’s a nice bloke. He was also a great batsman back in the day, and since then a very dedicated coach of the Australian cricket team who came in after the sandpaper affair in Cape Town and successfully helped them back away from the abyss. 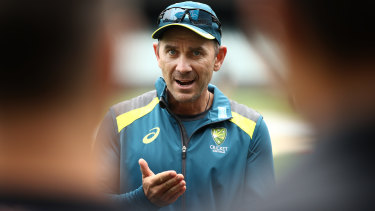 But lately? Well, lately there have been … issues.

In recent times there has been a growing wariness, not to mention weariness over his deadly … earnestness.

It all came to a head in August when he was obliged to meet with his senior players to try to thrash out their issues with the intensity of his whole approach. Everyone hoped he got the message, which boiled down to: “Justin, love ya, but canya please lighten the eff up?”

And so how did he go?

Well, now two months later, he is back in quarantine in the United Arab Emirates with the Australian team as they go into the Twenty20 World Cup. And as documented yesterday, Langer’s first significant act was to post on his LinkedIn account, a piece of writing inspired by Lebanese-Canadian poet Najwa Zebian titled, “A Taste of Your Own Medicine,” stressing the importance of being who you are and not changing to appease others. This is, bear in mind, the post of a coach who has been asked by his senior team members to dial back the earnestness. And I am going to give you as much of Langer’s post as I can stand before giving us all a quick break:

“Don’t be afraid to be yourself, even if it means removing yourself from lives you want to be in. You are, no doubt, worthy of being valued for who you are. So be who you are.”

Sounds like a plan. But right now, coach, I just need to go outside for some air and …

And what? You are still going?

“The wise man says: BE YOURSELF. YOU ARE UNIQUE and YOU ARE SPECIAL. Be happy, be healthy, be calm, be strong and BE YOURSELF.”

Herald cricket reporter Andrew Wu wrote that Langer often puts such quotes and proverbs up “as a source of motivation for his team … though the practice has grated some. [The latest post] will raise questions over Langer’s commitment to change a style that has brought him much success throughout his playing and coaching career but is now wearing thin among many of his charges.”

I am not surprised!

Seriously, could you believe that such a post from Langer will generate a single extra run, a single extra wicket? And if your answer is, “look it was not about them, it was about him,” I think we are getting to the nub of the problem.

Just as there is no “I” in “team”, there is bloody well no “insufferable self-absorption” in “coach”.

For compare Langer’s cited words to those of Al Pacino, playing NFL coach Tony D’Amato as he gives his dressing room speech in the film Any Given Sunday.

I know I do. Give it to ’em Al, as you talk to your charges three minutes before they play their make-or-break match of the season.

“We are in hell right now, gentlemen believe me and we can stay here and get the shit kicked out of us or we can fight our way back into the light. We can climb out of hell. One inch at a time.

“Because in either game, life or football, the margin for error is so small. I mean one half step too late or to early you don’t quite make it. One half second too slow or too fast, and you don’t quite catch it. The inches we need are everywhere around us. They are in ever break of the game every minute, every second.

Maybe you had to see the film.

But the point is this. Show that speech to serious footballers – even retired ones – and their pulse will quicken, their breathing will come in gasps, and on a good day their eyeballs will start to roll. Because even though Pacino is the one saying it, it’s not about him, it’s about them! And the speech contains truths that speaks to them, that lifts them up, doesn’t bring them down. The speech is so brilliant that – spoiler alert – the fact they subsequently go out to play the game of their lives is quite credible.

And yes, it is hardly the speech you’d make to cricketers. But the principle remains. To lift your charges by focusing on defending your own position? Please.

My bet is that if Langer hadn’t all but completely lost the dressing room before this point, that last bit of deadly earnestness will do it. It was death by inches. From Al Pacino to Doug Mulray is not the obvious segue, but I’ll give it a go with a famous Mulray line: “Put a fork in his arse, and turn him over. He’s done.”

Warriors Say Kevin Durant Will Be Out Another Week