JAPAN fans continued their custom of cleaning up stadiums at the end of matches – even though their team did not play. 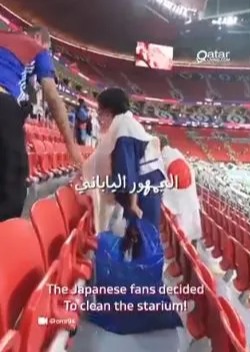 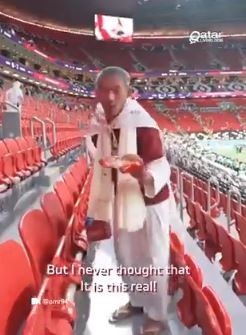 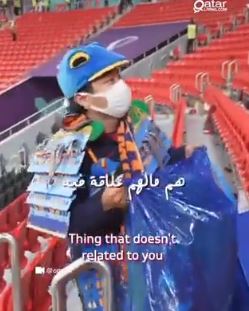 And at the end of the game they went around the Al Bayt Stadium picking up rubbish and collecting Qatar flags left behind by fans.

One Qatari fan was so shocked he began filming the group of Japanese supporters before joining in to help.

He asked why they chose to clean up before hugging one supporter and telling the group how much he respected him.

A fan explained their actions saying: "We never leave, Japanese never leave rubbish behind us. We respect the place."

The Qatari who filmed the video said: "Woah! I thought maybe one or two people. But they are cleaning all around the stadium.

"This is a thing I heard about but I never thought it was real. Wow! All respect."

Japanese fans have a reputation to uphold after cleaning up after themselves at the Russia World Cup in 2018.

Win, lose or draw they always tidy up and take bin bags to games – including at the 2014 World Cup.

Fans on social media were impressed with the clean-up crew with one saying: "They are always very conscientious!"

Another added: "They are taught this from kindergarten, their discipline is hope for humanity."

And a third said: "Without fail, every time."