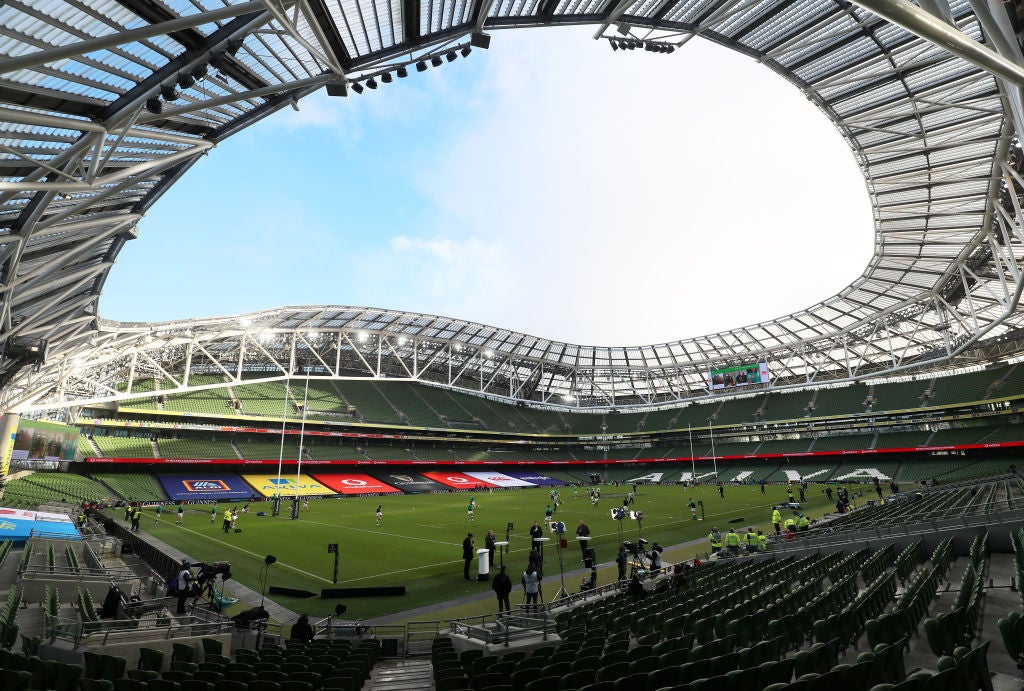 Ireland host France in the final Six Nations match of the weekend, which has already delivered plenty of thrills and spills as England rebounded to inflict another heavy loss on Italy, while the game of the day came at Murrayfield where Wales upset Scotland with a storming comeback.

France are the favourites for this year’s tournament, but after hammering Italy in their opener, Ireland present their first significant test, while Andy Farrell’s side were upset in a closely-fought contest with Wales, meaning the visit of Les Bleus will provide a wonderful opportunity to solidify their credentials.

Ireland coach Andy Farrell has pinpointed Les Bleus as the perfect example for his emerging squad, underlining the test should excite his group: “I suppose to get to be those experienced players they have to deal with situations like this,” Farrell said of his stand-in half-backs Billy Burns and Jamison Gibson-Park. “That’s the challenge of international rugby. If you want a long and fruitful international career, these are the games that you want to be involved in.

“Those young lads that have come into the French side have taken their chance and now they are becoming more experienced as they go. We’re playing at home and we love playing at home, and there’s no better opponent really than the team you guys (the media) are tipping as favourites. Why would we not get excited about that? They are raring to go, every single one of them that has been selected.”

Follow live updates from the Aviva in Dublin in what promises to be a wonderful game of rugby.

Rugby coverage is brought to you in association with QBE who help businesses build resilience through risk management and insurance. For more information go to QBEEUROPE.com

What about this Ireland side?

Andy Farrell has been dealt a rough hand. Ireland were the better side in Cardiff last Sunday despite going down to 14 players in the first half, but Wales showed grit, guts and just enough quality to edge to a victory. That red card to Peter O’Mahony led to a ban; failed HIAs during the match have ruled out Johnny Sexton and James Ryan.

To compllicate matters further, Conor Murray’s injury means Farrell has been forced to plump for an untested duo in the halves, and Ireland are without a regular domestic kicker – Billy Burns is more than capable from the tee and will presumably handle duties, but John Cooney kicks the goals at Ulster. It is both a huge chance and a significant challenge for Iain Henderson as the stand-in for the stand-in for the stand-in captain, but most of Ireland’s players are playing winning rugby for their clubs, and if they can get on the front foot they can match this France side. I thought both Robbie Henshaw and Garry Ringrose were excellent last week – they will again be key.

Favourites both today and for the tournament, this could be a huge afternoon for this French side. A statement away victory is something they perhaps require to really assert their place at the head of the Six Nations pack, and with Ireland not at full-strength, a win delivered with real emphasis is a possibility if they get things right. It is cliche to say the French don’t always travel well, and this group has largely proved expectations wrong in the last 18 months or so.

A win today of any sort would take them back to the top of the table heading into the first fallow week.

There are no such worries for Fabien Galthie and France – their two alterations are selection-based. It seems harsh on both Dylan Cretin and Teddy Thomas after each impressed a week ago, but Anthony Jelonch’s ability to compete and clearout at the breakdown is useful against this Ireland side, while Damian Penaud’s angular frame and long limbs add extra threat in the open field.

A reshuffling of bench props allows a return for the enormous Uini Atonio, and look out for Racing 92’s young loosehead Hassane Kolingar who is in line for a third cap.

No Johnny Sexton, no Conor Murrray, no James Ryan, no Peter O’Mahony – Ireland are shorn of four key players, and four key leaders.

Iain Henderson is among those to come in and takes the captaincy in the second row, while Rhys Ruddock is rewarded for some outstanding Leinster form with a place at six. Jamison Gibson-Park added zip from the bench against Wales last week but this is a different challenge as he starts. Billy Burns is his half-back partner, hoping to put a tough moment behind him.

A debut from the bench for Craig Casey, a scrum half of real promise, awaits.

Sufficiently caught up? Great – let’s take a closer look at the two sets of 23 named by Andy Farrell and Fabien Galthie today, beginning with the Ireland side…

…And at Murrayfield, where Wales clung on in the dying embers to a one-point victory as a 14-man Scotland fell just short: 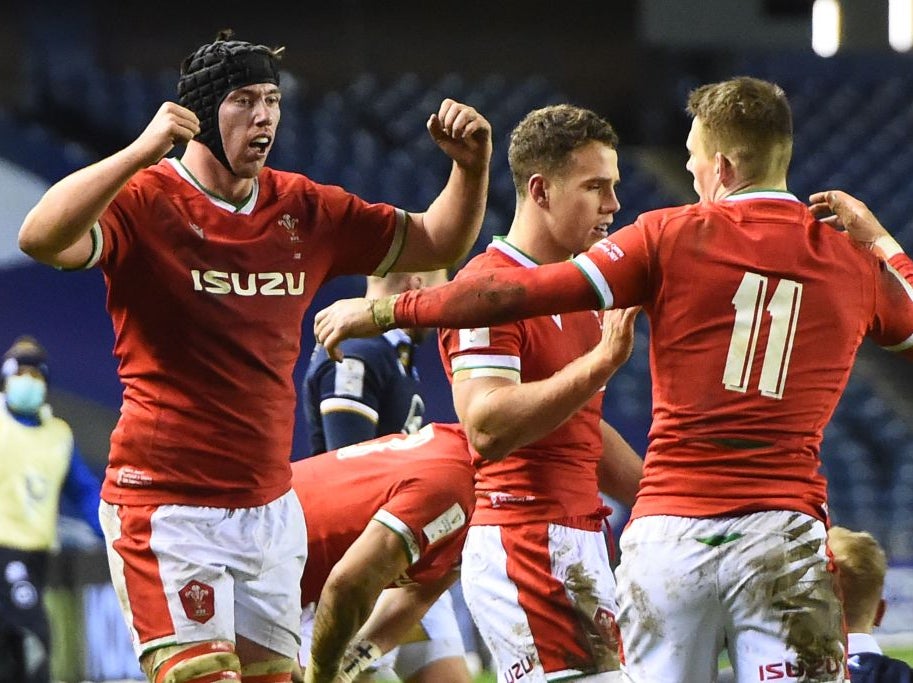 First, there is just time for a quick look back at yesterday’s proceedings at Twickenham, where a sloppy England managed to overcome a spunky Italy… 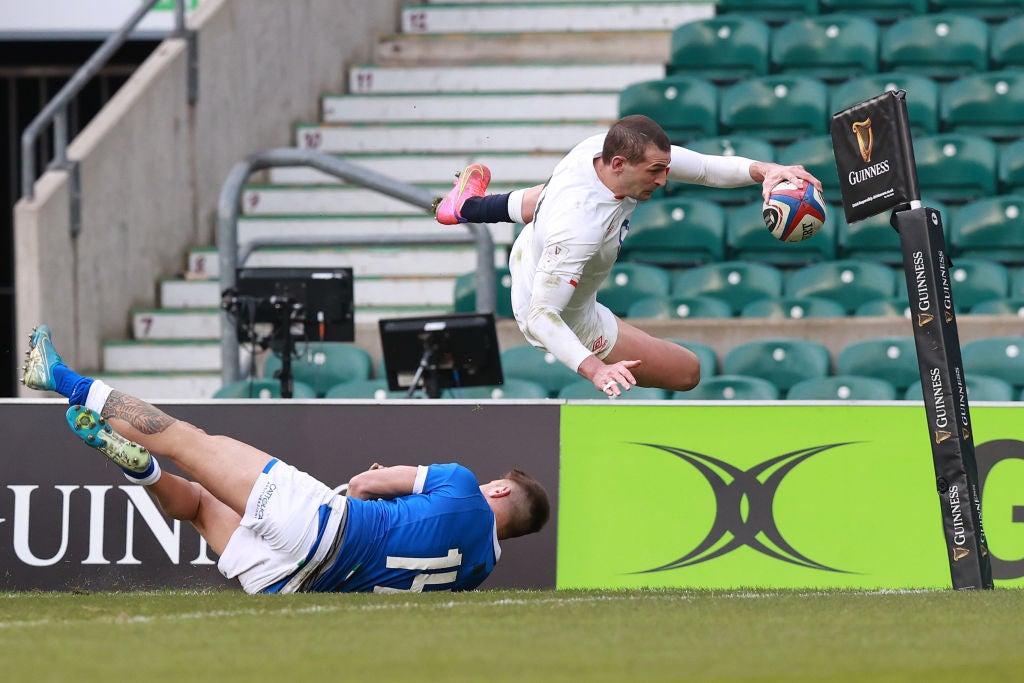 England 41-18 Italy: Eddie Jones’ side bounced back from their loss to Scotland with May plundering his 32nd international try

Good afternoon! It is the final game of the opening two-week stanza to this year’s Six Nations, a fallow weekend to come but some rather tasty business to be completed first. To Dublin we go for the first time in 2021, an injury-stricken Ireland hosting a France side who travel with a spot at the top of the tournament table on their minds, and an away victory that could go a long way towards securing a crown for which they appear to be favourites.

The French are the favourites, but Ireland are more than capable of puncturing their hopes, even in the absence of several key men. Kick-off at the Aviva Stadium is about an hour away…

“You just have to look at the results. We have won eight out of 10 matches,” Fabien Galthie told a pre-match press conference.

“In Scotland, we lost following a red card and in London we lost in extra-time. We will continue to make progress in many areas and we have significant room for improvement.”

IRELAND VS FRANCE: FARRELL ON TEST THAT LES BLEUS BRING

“I suppose to get to be those experienced players they have to deal with situations like this,” Farrell said of his stand-in half-backs Billy Burns and Jamison Gibson-Park.

“That’s the challenge of international rugby. If you want a long and fruitful international career, these are the games that you want to be involved in.

“Those young lads that have come into the French side have taken their chance and now they are becoming more experienced as they go.

“Why would we not get excited about that? They are raring to go, every single one of them that has been selected.”

Horse racing tips: This 8-1 shot can strike now returned to his favourite trip at Ascot