Home » Is Tyson Fury vs Anthony Joshua cancelled and how is Deontay Wilder involved?

The long-awaited Anthony Joshua vs Tyson Fury fight has taken another twist with Deontay Wilder now hoping to scupper plans for a world heavyweight title unification bout this summer.

A two-fight deal between WBA, IBF and WBO champ Joshua and Fury, who owns the WBC title, was finally agreed earlier this year but there remain finer details to iron out.

Eddie Hearn has all but confirmed the fight will take place in Saudi Arabia on 14 August with an exact fight venue in the final stages of being decided.

However, Wilder, who lost his second fight with Fury back in 2020, believes he remains contractually obliged to a rematch and took his case to an independent arbitration panel to decide.

After months of testimony from the two parties including depositions from Top Rank and Premier Boxing Champions, it has been reported that the arbitrator has ruled in the American’s favour plunging plans for the fight between the two Brits into doubt.

Here’s everything you need to know:

So what’s the latest with Wilder?

Fury had announced this week that the British pair would clash in Saudi Arabia on 14 August but he has now been told he must undertake a third fight against Wilder first.

After controversially drawing their first fight in 2018, Fury sensationally knocked Wilder out in their rematch in Las Vegas in February 2020 in what proved to be his last action in the ring.

Attempts to secure a third fight were complicated by an injury to Wilder, an absence of available television dates and the Covid pandemic prompting Fury to move on based on the assumption that any agreement had expired.

Judge Daniel Weinstein has now upheld Wilder’s claim that he is contractually due a rematch with Fury, which must take place before 15 September this year.

Is Fury vs Joshua cancelled then?

No, not yet anyway. There are a few available options for the Fury camp.

First, the arbitration verdict could and in all likelihood will be appealed. Should the verdict be overturned then it will be once again be full speed ahead for the fight in August.

Alternatively Fury could proceed with his plan to fight Joshua as planned, but then would be liable for significant damages should Wilder then take legal action against him.

The other option – and the far more likely one – is that Fury stumps up a step-aside fee to effectively persuade Wilder to waive his right to a second rematch.

Could Wilder fight the winner of Fury vs Joshua instead?

This feels the most likely outcome with the two Brits seemingly dead set on finally meeting this summer after lengthy and drawn out negotations.

Wilder could then choose to take the step-aside money, watch his two rivals beat each other up in the first fight and a likely rematch before then taking on the winner on for all the heavyweight belts. 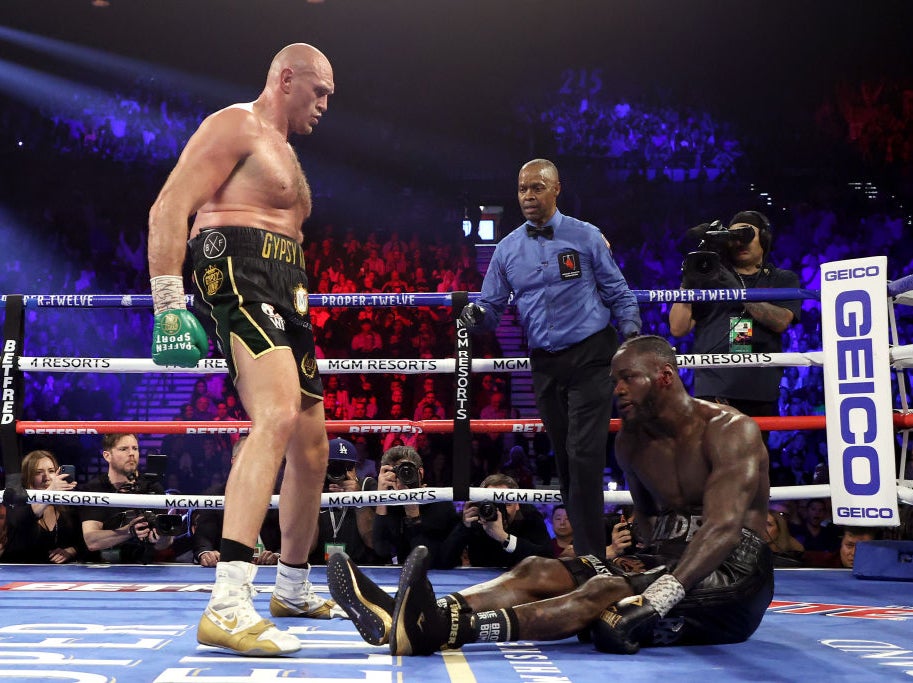 What’s the latest with Fury vs Joshua?

The details are still to be officially confirmed but 14 August now appears to be the favourite with Hearn and Fury indicating it is indeed the date, following the conclusion of the Tokyo Olympics on 8 August.

Where will the fight be?

Saudi Arabia. Promoter Hearn finally confirmed what had long been an open secret within the sport earlier in May.

“I think it’s a very bad secret that the fight is happening in Saudi Arabia,” he told Sky Sports. “It’s the same people we did the deal with for Andy Ruiz, that event was spectacular. As partners they were fantastic as well.

“We’re very comfortable. Anthony’s comfortable, he knows those people. They delivered on every one of their promises last time, we’re ready to go.”

Joshua regained his heavyweight belts with a points win over Ruiz 18 months ago in Diriyah, on the outskirts of the Saudi capital Riyadh, to avenge the only defeat of his professional career.

Joshua would therefore perhaps welcome a return to the scene of one of his greatest triumphs, but Hearn said last week a purpose-built outdoor arena is likely to be in Riyadh or Jeddah.

He added: “It’s 24 degrees at 11pm at night in August, which is not horrendous. They want to make it a spectacle.”

What belts are on the line?

All of them, basically.

Joshua’s IBF, WBO and WBA heavyweight title are on the line with Fury’s WBC strap also up for grabs.

The winner, should there be one, will become undisputed heavyweight champion of the world.

Who is going to win?

The £200m question. The bookmakers have Fury has the odds-on favourite, as things stand.

All odds via Betfair