Melbourne warrior Nathan Jones says he’ll put his hand up once again to lead the Demons for a sixth consecutive year, believing he still has “a lot to offer”.

The 31-year-old had been leading the playing group by himself before fellow bull midfielder Jack Viney was promoted to co-captain before the start of the 2017 season.

Former Melbourne captain Garry Lyon suggested earlier this week that it may be the right time for Jones to consider passing the baton to someone like a Max Gawn. 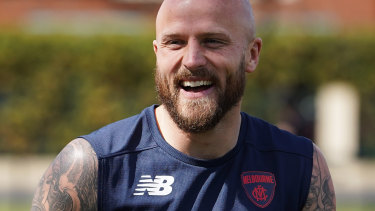 But heading into his 14th season at the highest level, Jones said on Wednesday that he was keen to continue in the role.

“I’ll put my hand up for it again, there’s no doubt about that, but whatever is best for the group, that will play out in the next week or two,’’ he said.

“I thought the balance we had last year worked terrifically. I think I’ve still got a lot to offer in that space, I’m still learning and improving.”

The promotion of Viney to join Jones as co-captain caused a stir two years ago, and Jones himself admitted to being initially “disappointed and frustrated” by the decision. But after experiencing the new set-up first hand, co-captain Jones is more than happy for it to continue.

“I’m really excited about the development in that space across our group over the last three or four years,’’ he said.

“Initially there wasn’t huge depth in the leadership department but over the last couple of years we’ve invested heavily in that area.

“I’ve been a part of groups where we’ve gone young in the past and that hasn’t necessarily worked so I think it’s a fine balance.”

Sturridge and Oxlade-Chamberlain among sports stars at Brit awards

Woman spends $10,700 on surgery to achieve the perfect 'revenge body'