LA MONGIE, France — When the team of Geraint Thomas was in its pomp at the Tour de France, a time trial followed by a big mountain stage would have been playgrounds for Sky — now in new colors as Ineos — to take cycling’s greatest race by the scruff of the neck and leave everyone else fighting for second place.

Thomas, the defending champion, cracked on Saturday on the Tour’s first encounter with a climb to above 2,000 meters (6,500 feet), exposing weaknesses in a team that has won six Tours in the past seven years.

The time trial on Friday and the climb to the Tourmalet pass on Saturday seemed primed for Thomas to reel in Julian Alaphilippe, the yellow jersey holder from France who is setting the Tour alight with his punchy riding and determination to keep the race lead, filling French fans’ heads with dreams of a first homegrown winner since 1985.

But instead, Thomas has seen Alaphilippe only get further and further away. In two days, he has put 50 seconds of extra daylight between him and Thomas, a Welshman. His lead — up to 2 minutes 2 seconds — is becoming large enough to start realistically envisioning Alaphilippe in yellow in Paris next weekend as the first French winner since Bernard Hinault.

Fueling the ecstasy of delirious crowds that lined Saturday’s steep uphill finish, the French rider Thibaut Pinot won Stage 14, putting him back in the picture to fight for the podium after he lost mountains of time on Stage 10.

Thomas rightly pointed out that the Tour is far from done, with six more ascents to above 2,000 meters still to come. But his inability to stay with Pinot, Alaphilippe and other title contenders at the top of the Tourmalet — he was eighth, 36 seconds behind Pinot — was a jolt for the Tour, which has been dominated by his British team since 2012 — with the champions Bradley Wiggins, Chris Froome and, in 2018, Thomas. 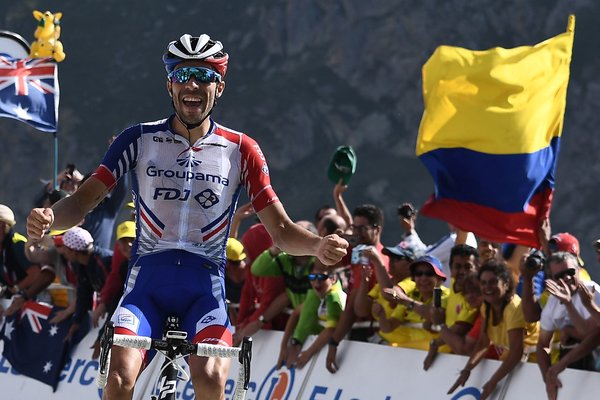 “Not the best day,” Thomas said. “I just didn’t feel quite on it from the start. I was quite weak.

“At the end, I knew I just had to pace it. I didn’t really attempt to follow when they kicked. I just thought I should ride my own pace rather than follow them and blow up on the steepest bit at the end. It’s disappointing. I just tried to limit the damage.”

Having taken cycling to a new level since 2012 with its vast budget and attention to the minutest of details, the team run by David Brailsford has been hit both by misfortune and by the inevitability that other teams would start to close the gap.

A crash in training for Froome, a four-time winner now recovering from career-threatening broken bones, robbed the team of its ace. Thomas’s preparations were hampered by a crash at the Tour of Switzerland last month. And Egan Bernal, being groomed by Brailsford to succeed Froome and Thomas, looks increasingly unable to compete for the title this year. Bernal was fifth on the Tourmalet and is fourth over all, three minutes behind Alaphilippe.

Pinot, now sixth over all and 3:12 behind Alaphilippe, is showing remarkable grit in bouncing back from his Stage 10 misfortune, when he was part of a group that was separated from other title contenders in crosswinds.

“I have this rage inside me because in my opinion it was an injustice,” said Pinot, a podium finisher in 2014.

“Since the start of the Tour I had this stage in the back of my mind: The Tourmalet, it’s mythical,” said Pinot, who has three career stage wins at the Tour.

President Emmanuel Macron of France, on hand at the top of the Tourmalet to see Pinot win and Alaphilippe extend his lead, gushed about the “two fantastic riders.”

“They attack and they have heart,” Macron said.