Simply The Betts landed the big one after an agonising week at Cheltenham, as Saint Calvados and Rouge Vif both went close. 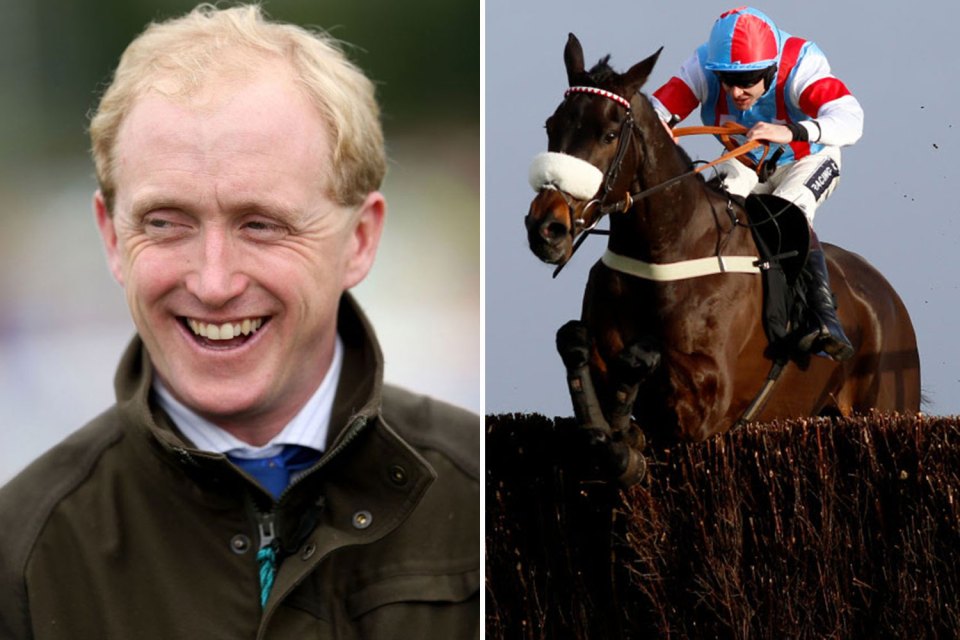 A lot has changed in the world since Cheltenham, but Whittington is hoping to keep momentum up after a career-best season.

The ‘Big Three’ will continue to fly the flag, but heaps of new, young horses are set to be unleashed with Whittington hoping three becomes four.

Whittington, 36, said: “There’s a real buzz here at the moment.

“Things aren’t great in the outside world, so it just makes sure we don’t take it for granted how lucky we are to work with these animals.

“Cheltenham was amazing, there’s no other way to describe it. It seems like years ago now, but it was only six months!

“The fact the whole world turned upside down the following week makes it quite strange to look back.

“All the horses ran with such credit and they just excelled themselves.”

Despite a shortened campaign, last year was a clear career best for the Whittington team.

Prize money was up and so were the winners and the team have been busy adding new boxes to the Hill Barn Stables.

New owners – including the green silks of Simon Munir and Isaac Souede – are hoping to join the journey at an exciting time.

“They’re starting now and we’ve had a couple of winners from them already which is always good.

“I don’t have specific targets in mind this season and we’ve missed part of the season. I don’t want to chase it.

“We’ve always been quality over quantity.”

"His run in the Ryanair was unbelievable against high-class opposition which looked an exceptional race. We had to improve on what he’d done that year and we did. It was a testament to the horse. We changed tactics with him, stepped up in trip and it all worked out.

"He’s thriving that way and he showed he can be high class and hopefully there is still more to come – unbelievably he’s still only seven. We’re still thrashing it out with what we do and where we go. We’ll all have a say on where he goes but ultimately it’s Andrew’s decision.

"We can give him entries over two and a half, and three miles. Off his rating he’s very limited to what he can run, so races like the Christy Chase at Ascot and the Betfair Chase are the obvious ones to start. Then you have things like the King George, the Ryanair and the Gold Cup down the line.

"I don’t think he’ll have a problem getting three miles, whether that’s three miles on a sharp track but maybe not a real test I don’t know. But the horse will tell us through the season and we have to evaluate the opposition and where he is at at the time and Andrew will make the decision.

"We don’t necessarily need to step him up in trip, it’s one of those things. He’s got the speed for two mile races and it’s a nice problem to have."

"He’s four from five over fences now and he’s a seriously high class horse. Gavin Sheehan has always said he’s got the speed for two miles, but is very good over two-and-a-half and would probably stay three.

"He’s off 157 now, so he’ll probably run in one more handicap before he goes into more prestigious races if he was able to come through that. The Old Roan and the Betvictor are the entries he will have and we’ll see. Andrew also has Itchy Feet so there are decisions for him to make.

"He’s very good around Cheltenham and that 2.5 suits him very well and there’s obviously the betvictor. He’s in great form at home and we’re very happy with him.

"He’s strengthened up for a break and we’re probably not far off a run. It’s amazing to think he’s the same age as Saint Calvados but I’ve never properly worked them against each other as they’d try too hard against one another.

"I think maybe at the moment Simply The Betts maybe has a bit more speed, but it’s very hard to say. It’s a possibility you can drop back to two, on very soft ground in a truly run race, which is very exciting too, it gives us more options."

"He ran well in the Arkle, he stayed on up the hill nicely. He seems a bit more relaxed this season and looks to have matured mentally. He was always a little bit too over enthusiastic, he’s always done everything a million miles per hour. He’s much calmer now and he’s much more professional.

"He should get two-and-a-half this year, but I think we’ll start off over two. Off 156 he’ll go in a handicap and he has to improve again as he’ll be at the top end of the weights in a good race.

"There’s the race Saint Calvados won last year, the Showcase Trophy at Cheltenham in the October Meeting. Then there’s the Haldon Gold Cup at Exeter which is ten days after. I think it’ll be a good race this year."

"I think there’s more to come from him this year. He’ll go novice chasing, he’s a massive, massive horse. He surprised us over hurdles. I didn’t think he’d win a bumper and he did, so it’s always a bonus. He’s been schooling over fences very well and he’s related to staying chasers.

"He’s three from five over hurdles and got a mark of 135 so he’ll start off in a novices’ handicap. He’s in at Uttoxeter next week, we’d need more rain for that. As long as he gets a nice go first time over fences we’ll just go slowly, catch a monkey with him.

"I think he’s got a bit more class to be in nice races next year but this year we’ll go under the radar. I thought at the end of the season he’d be perfect for the open novices’ handicap on Midlands’ National Day."

"He picked up an injury and will probably be out for the season."

"He’s back in with us. He had an operation after pulling up in the Scottish Champion Hurdle. He had a year off in Ireland and he’s back in good form.

"The handicapper has given him a mark of 128 so he’s in a couple of races next week. I think the first race back we’ll go over hurdles with him but he’s schooled over fences and did it nicely."

"He looks a really nice horse. He won a French juvenile hurdle a year ago and he’s really racey, an athletic type. He hasn’t been here too long so we’re just getting to know him on the gallops. He shows plenty of speed.

"He’ll be ready November time I think but I’m still learning about him. But he’s exactly the kind of horse we love to have coming in and it’s a privilege to train for such brilliant owners such as Issac Souede and Simon Munir."

"He’s a gorgeous, big horse. He’s a huge frame of a horse at the moment but has a beautiful action. He covers a huge amount of ground and he should make a lovely chaser one day.

"He won a point-to-point in good style on his only run and he’s had a few small wind issues but hopefully he’s over them now. I think two-and-a-half mile novice hurdles on soft ground will be his bag to start."

"He’s a lovely big horse and has some nice form to his name. We’ve just had him in from the summer, he looks an out and out chaser. He’s a fine big horse with a great action and has just come back from a setback, he had an operation on his back.

"He’s got some nice form to his name, especially further back, and we’ll tip away at first and start off around a galloping track around two-and-a-half. We’ll try and keep him under the radar to start."

"Finished third in his only point and looks a staying chaser for the future. I’d imagine we’ll start off over two-and-a-half miles over hurdles. He’s another fine big horse that covers a lot of ground. He’d want it soft, but is only four and we won’t be over-facing him this year. He’s one for the future."

"A chase winner in France as a three-year-old. He’s been schooling well at home and knows his job. He’s been given a mark of 135, but he gets a big weight allowance at this time of year and he’s already a chase winner.

"So I imagine we use that as soon as possible. He’s in in a few places over the next week so should be out soon."

"He’s only a three-year-old but jumps very well. He was at Tom Cooper’s in Ireland and he did a lot of schooling with him there. He’s made our job easy and I’m sure we’ll have a bit of fun with him."

"He looks a lovely horse. He’s done plenty of work in France and schooled lots. He looks speedy, but like he has a lot of class. He’s got a bit of knee action so I imagine he’d want some soft ground and a galloping track.

"His work has been very good at home and we’re looking forward to running him. He’ll start off in a two mile maiden hurdle. He won’t need to go in a bumper as he’s done so much jumping in France."

"He’s a massive horse, he’s 17’1. He’s a chaser in the making and has run in three points. He was just big and weak so we gave him some time off.

"I ran him in a bumper last spring and he came to win his race but just weakened. He hung a bit and was just weak late on. Gavin said he was winning it the whole way and then just stopped.

"He’s still a bit weak but has improved massively for a break and his whole demeanour is better. He’s coping with it all better and he won’t be in a bumper again. He’s an awesome jumper and a three-miler for the future. "

"She’s a beautiful mare and ran with so much promise on debut. She bonked the first hurdle at Ludlow that day which was a bit embarrassing but over a mile and six around Ludlow with 15 runners she managed to finish fourth.

"She made up so much ground under hands and heels. Jonny Burke just said wow, she’s a lovely mare. She’s tailor made for a two mile bumper somewhere now.

"She has a huge big stride and every member of her family is a winner. She has size and presence and we’re looking forward to her, she’s exciting."

"I really like him, he won well at Beverley on the flat and the second from there is now rated 87.

"He’s a very tall horse so I’d imagine he was probably quite weak as a juvenile is strengthening up as we go. He was fit and ready to go but he didn’t come back from the sales so well so he’s just starting to come back. He’ll be out in mid-November. He’s by Authorized one of my favourite stallions."

"He won a point on his only start in Ireland and I picked him out at the Cheltenham sales. He looks like he’s got speed and I think we’ll start him off in a decent bumper before he goes novice hurdling."

"We think the world of this one, he works extremely well. He’s plenty of presence and quality. He has the size to be a chaser one day, but has that bit of class to go and win a bumper."