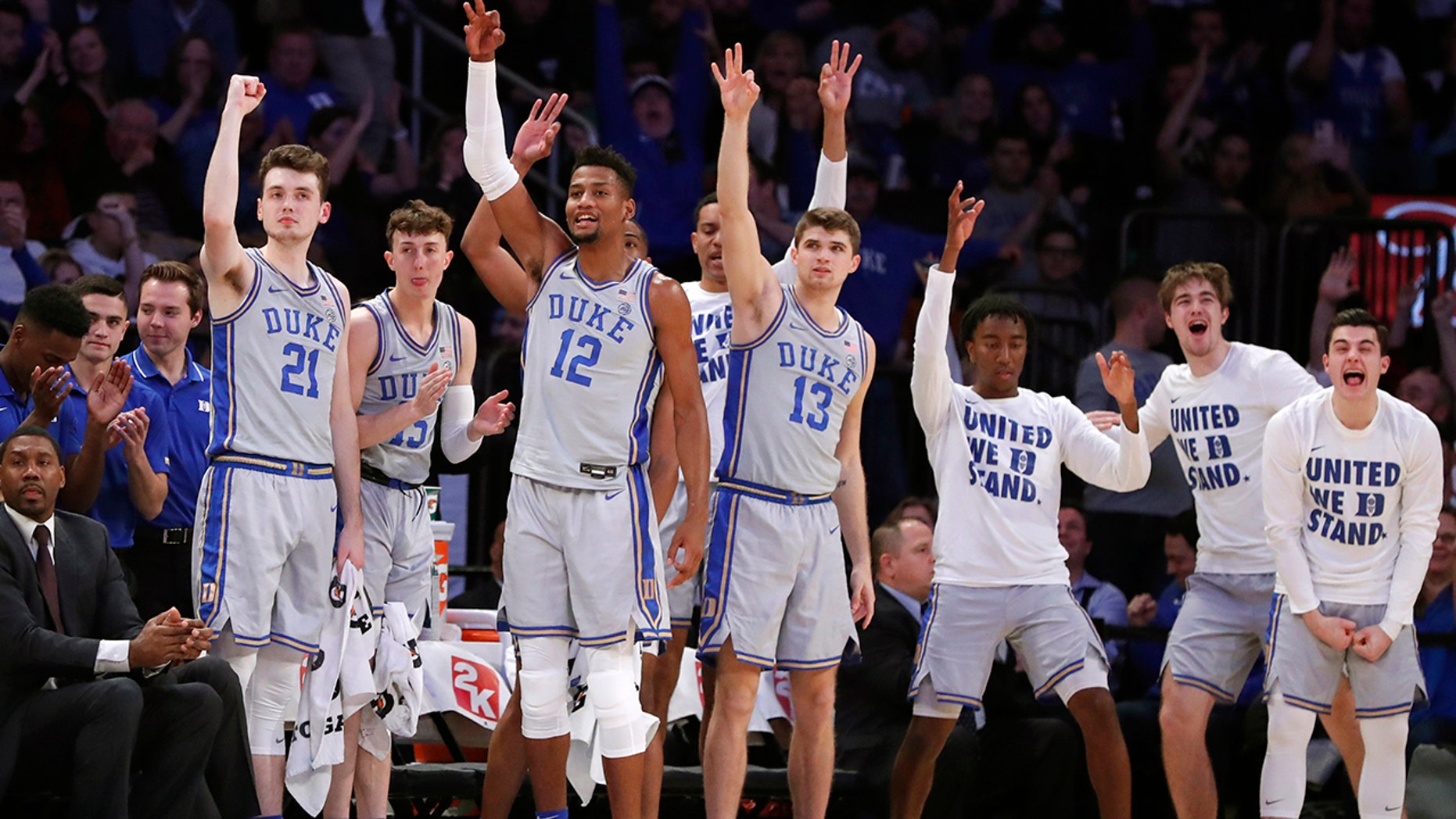 Duke players react from the bench during the first half of the first round of the 2K Empire Classic NCAA college basketball tournament against California, Thursday, Nov. 21, 2019, in New York. (AP Photo/Kathy Willens)

Mike Krzyzewski is about to become No. 1 at winning at No. 1.

He has to share that milestone for at least one more game with the Wizard of Westwood.

Krzyzewski coached a No. 1-ranked Duke team to victory for the 217th time, matching John Wooden for that career record in the Blue Devils' 87-52 romp over California on Thursday night at Madison Square Garden.

Krzyzewski is 217-34 when the Blue Devils hold the top spot, a mark they hit this week in The Associated Press poll. Wooden went 217-11 with UCLA as the top-ranked team.

“I would think most games he (coached) he was No. 1,” Krzyzewski said. “Any time you’re mentioned along anything he did is a pretty big compliment.”

Krzyzewski can set the record Friday night at MSG if the Blue Devils (5-0) knock off Georgetown in the final of the 2K Empire Classic. The Hoyas defeated No. 22 Texas 82-66 in the opener.

The Blue Devils climbed a spot after unranked Evansville pulled off the season's biggest surprise so far by stunning previous No. 1 Kentucky.

Duke is ranked No. 1 for the 143rd week, extending its own record, and has the top spot in the AP poll for the 20th season under Krzyzewski, also a record.

Vernon Carey led Duke with 31 points and 12 rebounds. Carey scored 21 points in the first half, one point better than the best in his brief career, set a game earlier against Georgia State.

“He’s the focal point of our offense right now,” Krzyzewski said. “He's making passes, he can put the ball on the floor. He's playing through contact, has a good touch.”

Jack White and Tre Jones hit consecutive 3s in the first half to help stretch a nine-point lead to 19 at halftime, and the Blue Devils never looked back. Duke fans filled the Garden, the program's home in the Northeast. The Blue Devils opened the season here with a win over Kansas and they beat Cal for their 37th career win at MSG.

This game could have been played anywhere and the outcome would surely be the same.

The play of the game for Duke came on Alex O'Connell's driving, one-handed dunk down the lane in the second half that woke up the sleepy crowd. That made it 57-32 and the cheers continued as the dunk was replayed heading into a timeout.

The loudest ovation came for former Duke star and Knicks rookie RJ Barrett, who flashed a gaudy championship ring — the type of jewelry the Knicks haven’t seen around the city in decades.

The Blue Devils are heavy on freshmen again after replacing one batch of one-and-done players with another. Carey, a five-star recruit who inherited Zion Williamson's No. 1 jersey, made 11 of 18 shots and checked out with Duke holding a 27-point lead.

The Golden Bears (4-1) shot only 37% from the floor and failed to have a player score in double digits.

Cal: Coach Mark Fox lost for the first time in his first season at Cal. Fox was hired after a search that lasted less than a week to replace Wyking Jones. During 14 seasons with Nevada and Georgia, Fox went 286-176 with five NCAA Tournament appearances. The Golden Bears were off to their best start since 2015-16 and are already halfway toward last season's win total.

“This is a great test for us to learn what the best looks like,” Fox said. “They have a great team and a very complete team.”

Duke: The Blue Devils play for another in-season tournament title.

Cal: Plays No. 22 Texas in the consolation game, then hosts UC Davis on Tuesday.

Bryce Harper is loving being an afterthought with Phillies