Kyle Pitts has arrived in the NFL with the UK able to revel in what was a truly memorable performance as the Atlanta Falcons defeat the New York Jets 27-20 at Tottenham Hotspur Stadium.

This is one of the most exciting talents to come out across any sport for years with the potential to transcend his position as a tight end and light up the field.

The fourth overall pick in this year’s draft has hardly flopped through the first quarter of the season, but the Falcons star had gone scoreless over four games entering this week.

Offensive wizard Arthur Smith has understandably eased the 21-year-old into the pro ranks with 15 targets so far, but despite his youth, Pitts was expected to shoulder a considerable burden in London and duly delivered for his first-year coach.

“Kyle stepped up today,” remarked Smith. “We’ll continue to involve him and he won his one on one match-ups. Everybody wants the hot takes after week one, but that’s why he’s here and he’ll continue to improve.”

Not only was Pitts expected to spark the Falcons offense into life without its No 1 receiver Calvin Ridley, absent due to personal reasons, but with fantasy players desperate to see their investment start to appreciate after such a clamour to acquire him this offseason.

And with the Jets’ turgid offense under rookie Zach Wilson, there was also a collective sympathy from Americans waking up across the pond to witness a packed out Tottenham Hotspur Stadium enduring such a sloppy contest. 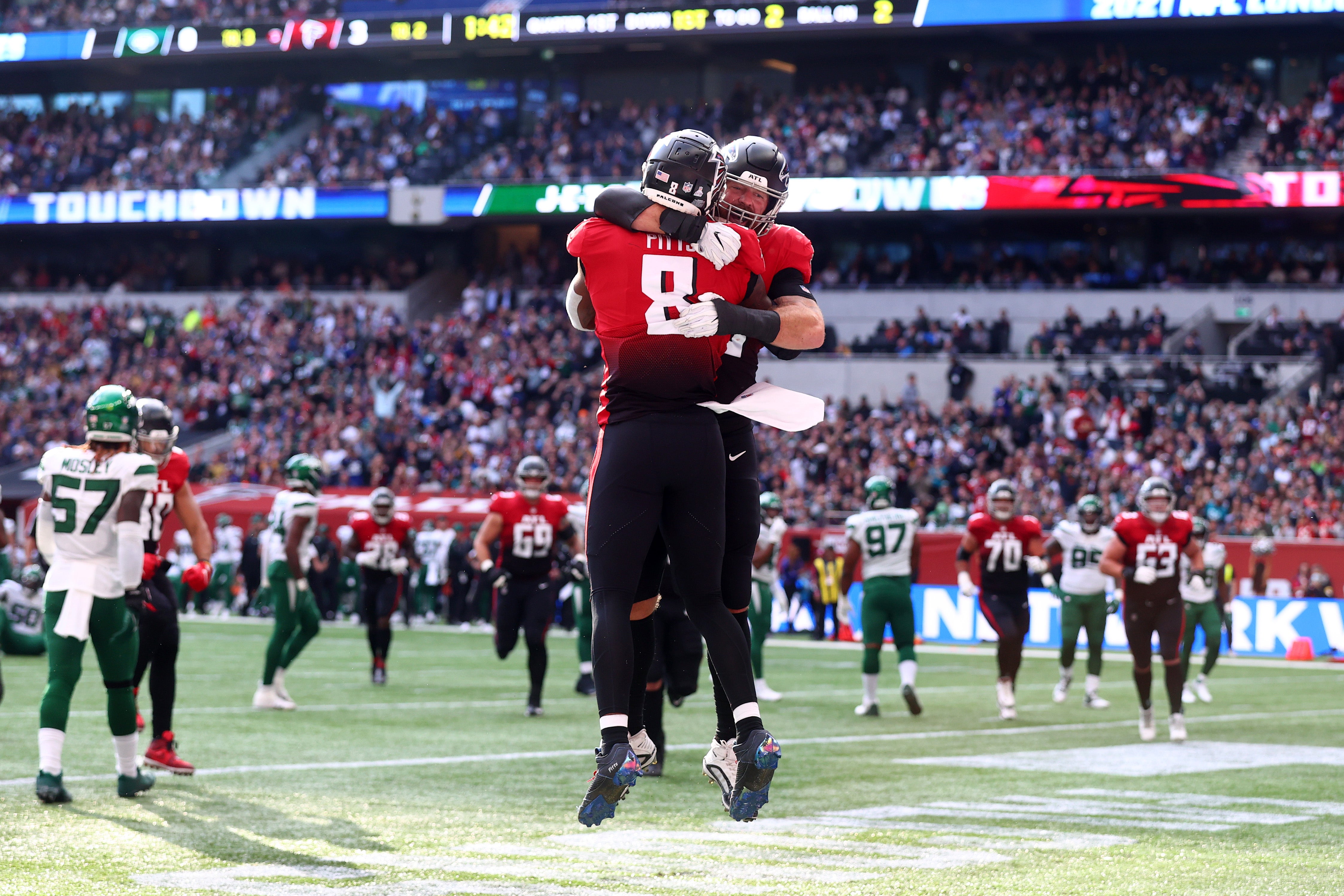 So when Pitts stormed into the end zone before cutting towards the sideline towards the end of the first quarter, grasping the ball fizzed in by Matt Ryan for his first score as a professional, fans rejoiced at witnessing genuine star power prosper in the capital.

NFL fans in the UK and Europe in general are notably loyal, with the novelty of competitive games that actually counts still enough to satisfy their thirst to witness live football.

But the quality, with two losing teams this week and two more to come next week in the Jaguars and Dolphins, sporadic at best, fans’ patience has been waning.

Regardless, this was billed as a genuinely closely-matched contest, with the Falcons given a slender 2.5 advantage on the points spread by bookmakers.

And yet, groans soon broke out as Wilson struggled with his accuracy early on. The former BYU signal caller even dumped the ball into his own lineman’s back while attempting to connect with a screen pass. So the performance of Pitts, who scooped up an easy score to provide a tantalising preview of how he intends to torment defenses in the red zone for many years to come, was duly welcomed.

A one-handed scoop in the first half enabled him to pick up 22 yards as the Falcons funnelled targets his way, feasting on the mismatches Pitts often presents opponents.

With the game meandering towards a Falcons victory, the Jets snapped out of their lull, igniting behind Wilson in a four-play, 90-yard drive over just 155 seconds to slice the lead to just three points with less than seven minutes on the clock.

But just as Falcons fans sensed another horrendous collapse of the ilk that has tormented this franchise for years, Ryan zoned in on Pitts to dampen the newfound spirit among Gang Green.

A beautiful 39-yard bomb sent over the middle found Pitts for 39 yards to clinch a first 100+ yard game to go with a debut score.

The smoke and mirrors of Cordarrelle Patterson under Smith continues to mesmerise opponents. But Atlanta fans, as well as fantasy players, now have the comfort of knowing Pitts is the real deal and primed to emerge as appointment viewing for weeks to come.