NOT even Arsenal could mess this one up.

An out-of-form, injury-ravaged side are usually just the ingredients needed for a Gunners special. 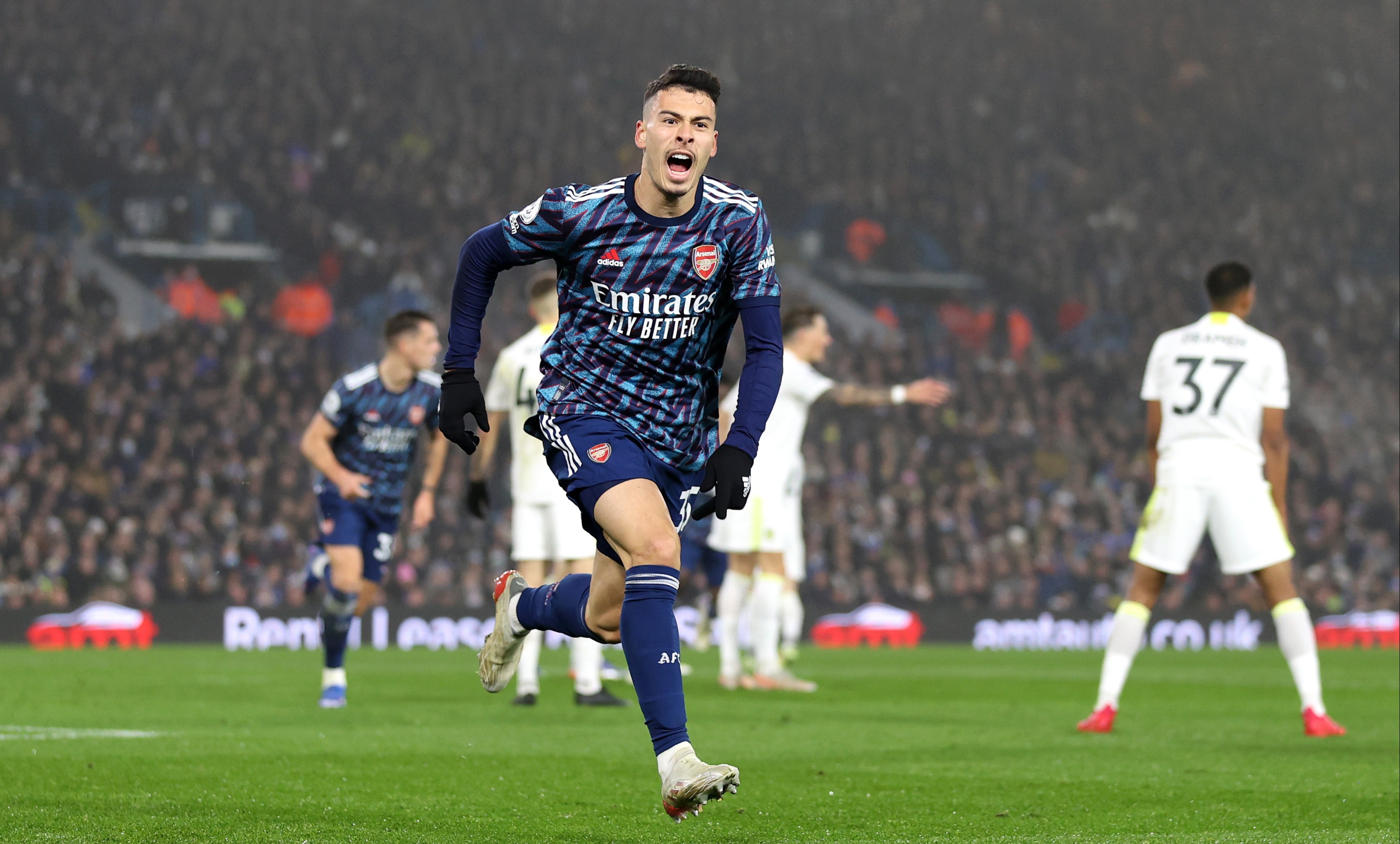 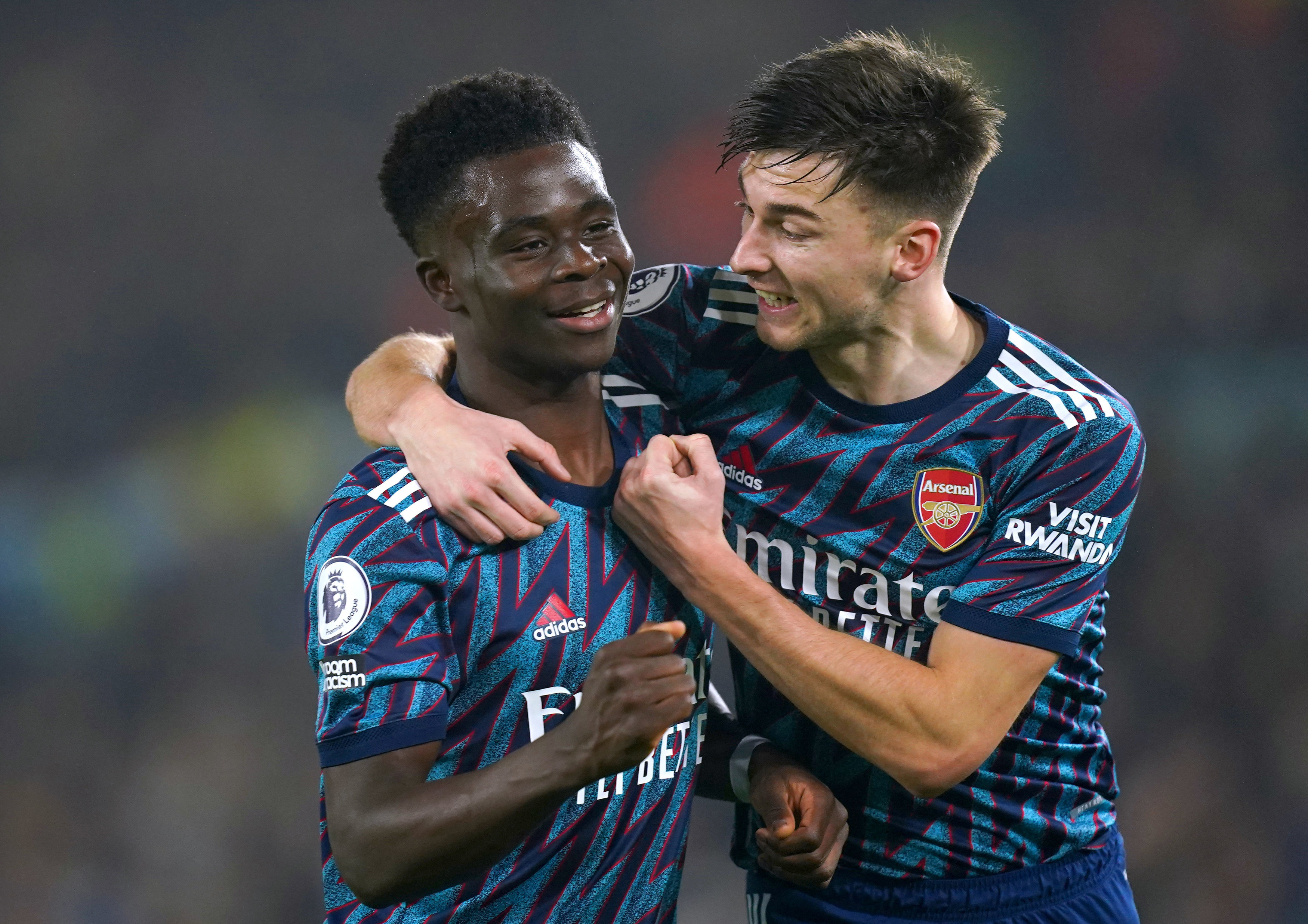 They were at their classically brittle best earlier this month when they lost to an Everton side that had lost six of their previous seven.

Anything but a win here, though, really would have taken the biscuit.

Coming off the back of a 7-0 mauling at Manchester City, Leeds had 10 players – and SEVEN defenders – missing through injury, Covid and suspension.

Nobody gave the Yorkshiremen a hope – but that’s usually the cue for the type of capitulation Arsenal have become the leading authority on.

This time, however, Mikel Arteta’s boys got the job done with next to minimal fuss – strengthening their position in the top four and locking third-placed Chelsea in their sights.

The last time Arsenal were in the top four at Christmas was five years ago. 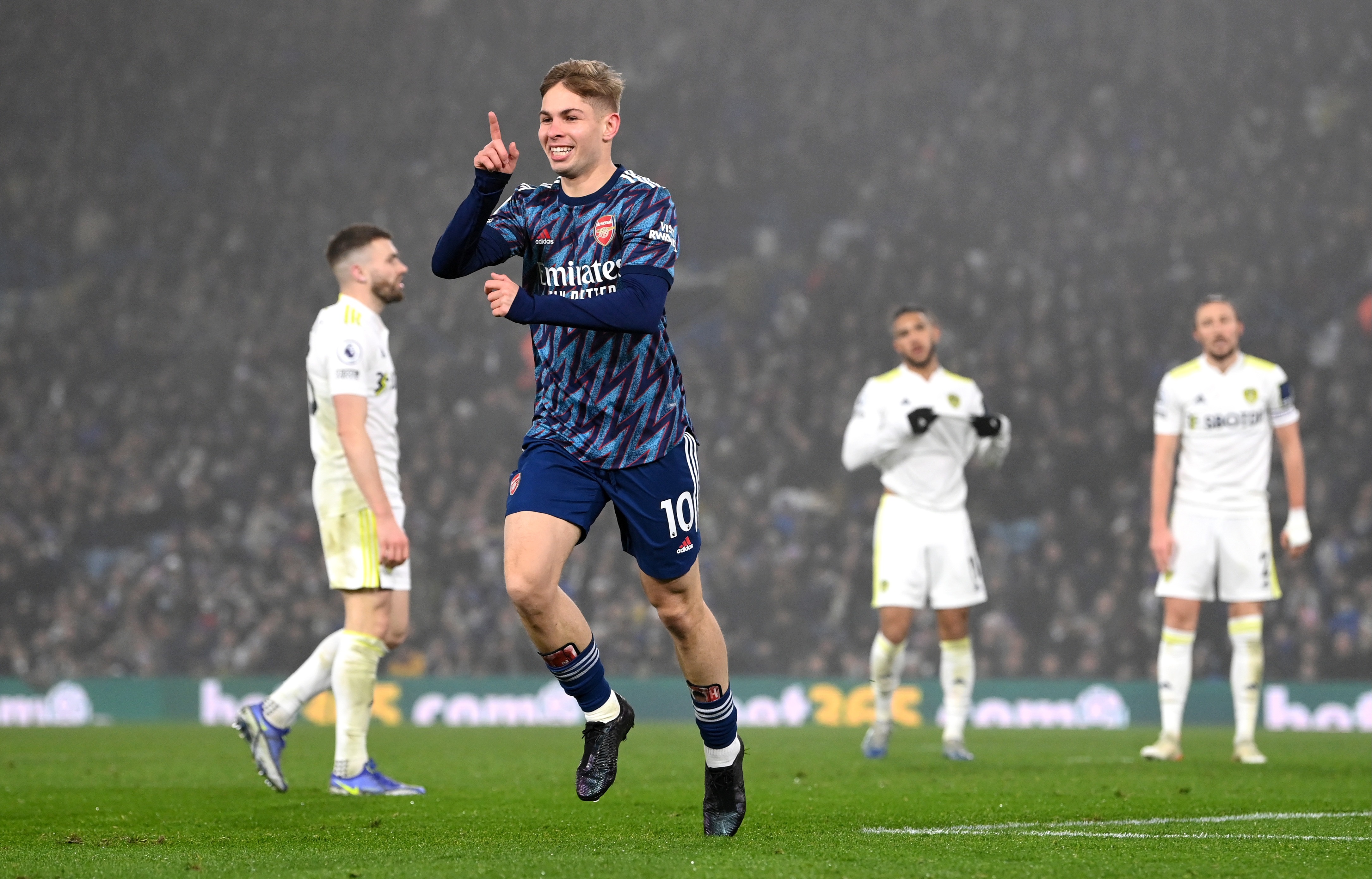 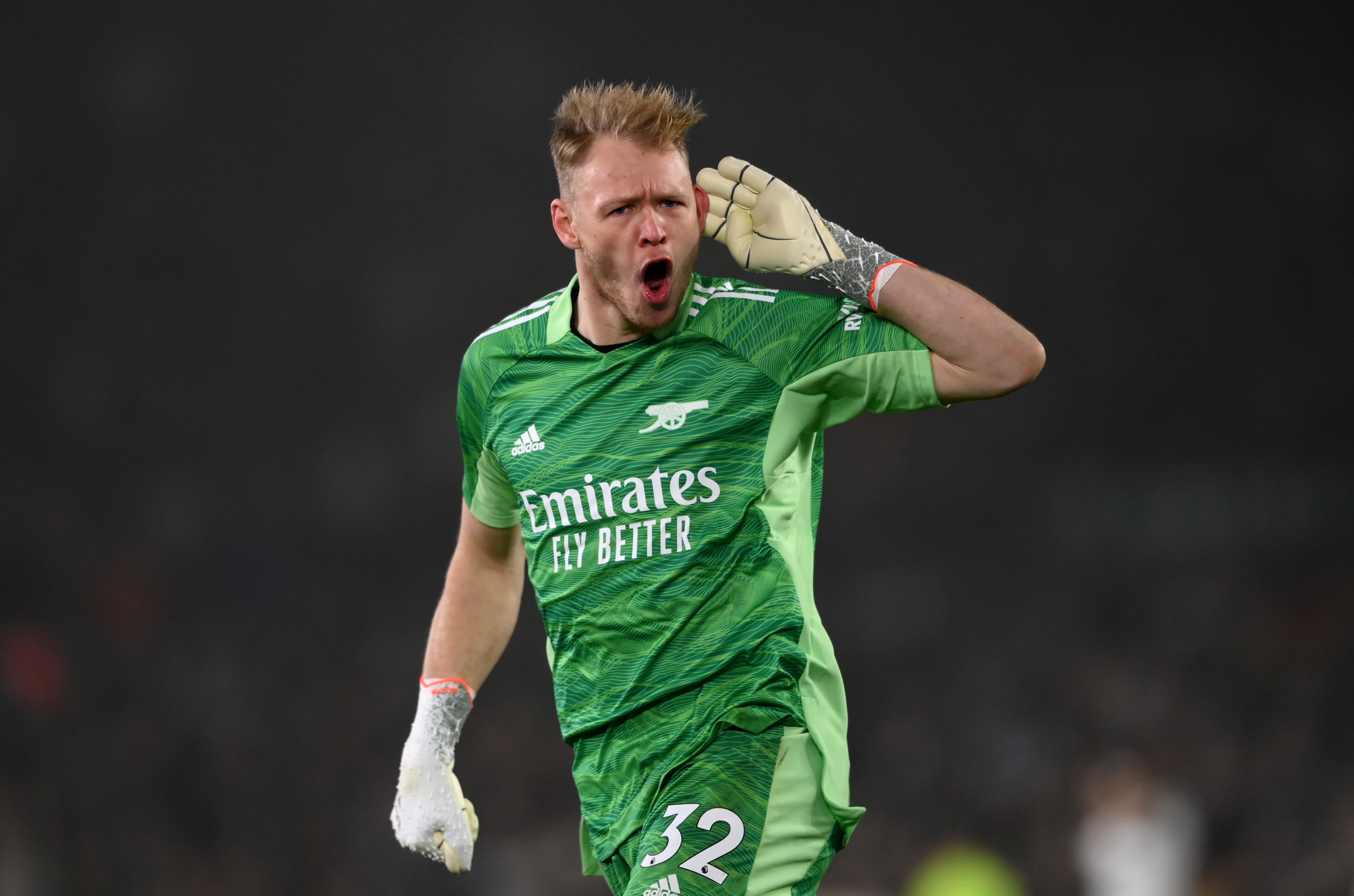 But to draw any definitive conclusions from this – their third straight win – would be foolish, coming against a decimated bottom-six side.

All the damage was done in 26 first-half minutes as Gabriel Martinelli bagged a brace before Bukayo Saka made it 3-0 just before the break.

It obviously wouldn’t be Arsenal without a bit of squeaky bum time, though, and they duly delivered late on to throw Leeds a lifeline.

Ben White lunged into Joe Gelhardt with 15 minutes remaining, Raphinha converted the penalty, and in theory it was game on again.

But as Leeds pushed to make it a grandstand finish, the superb Martin Odegaard played in sub Emil Smith Rowe on the counter to wrap it up.

While it’s rock-bottom Norwich up next for Arsenal, Leeds -Covid-permitting – face a trip to Liverpool on Boxing Day. 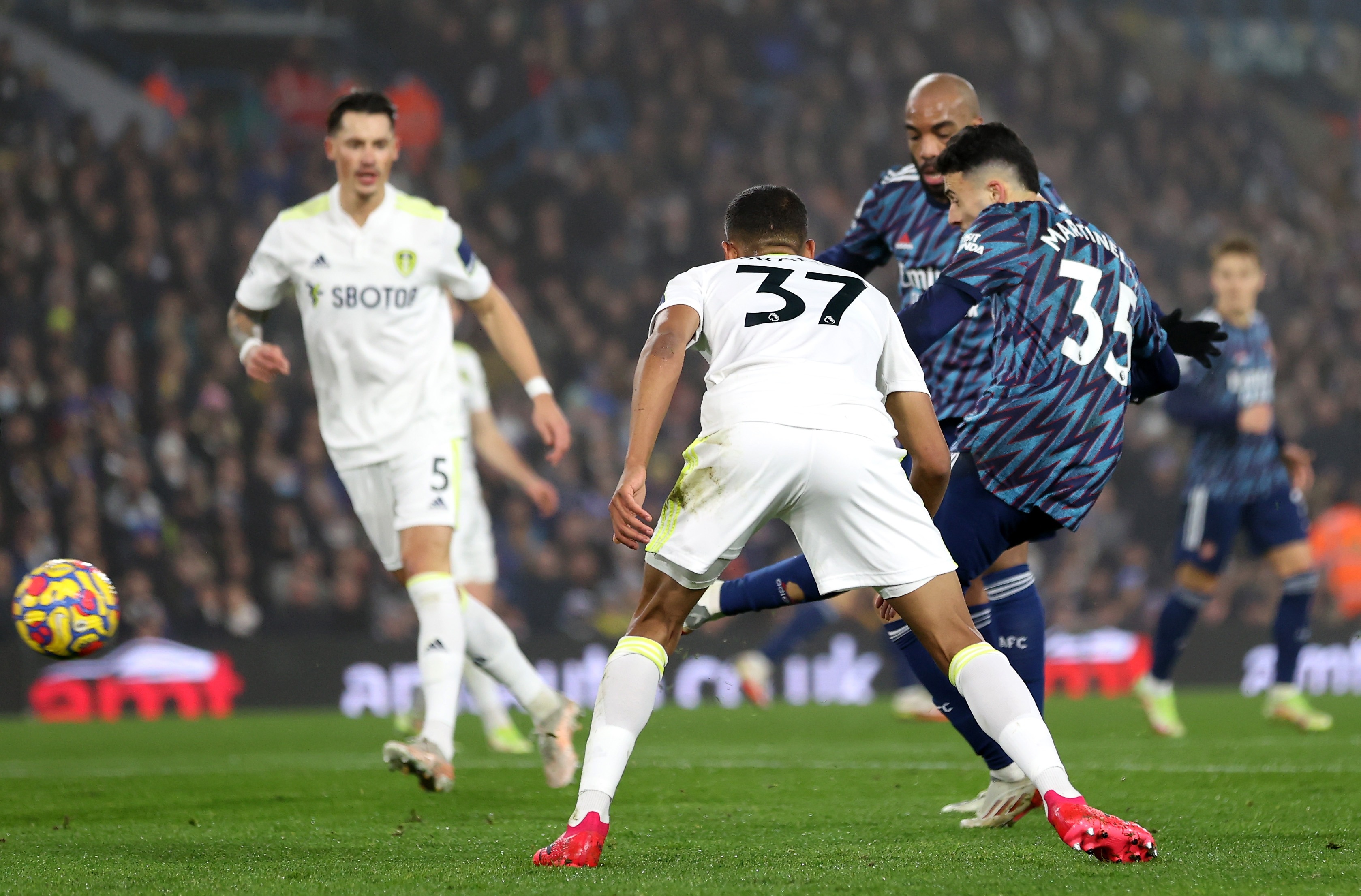 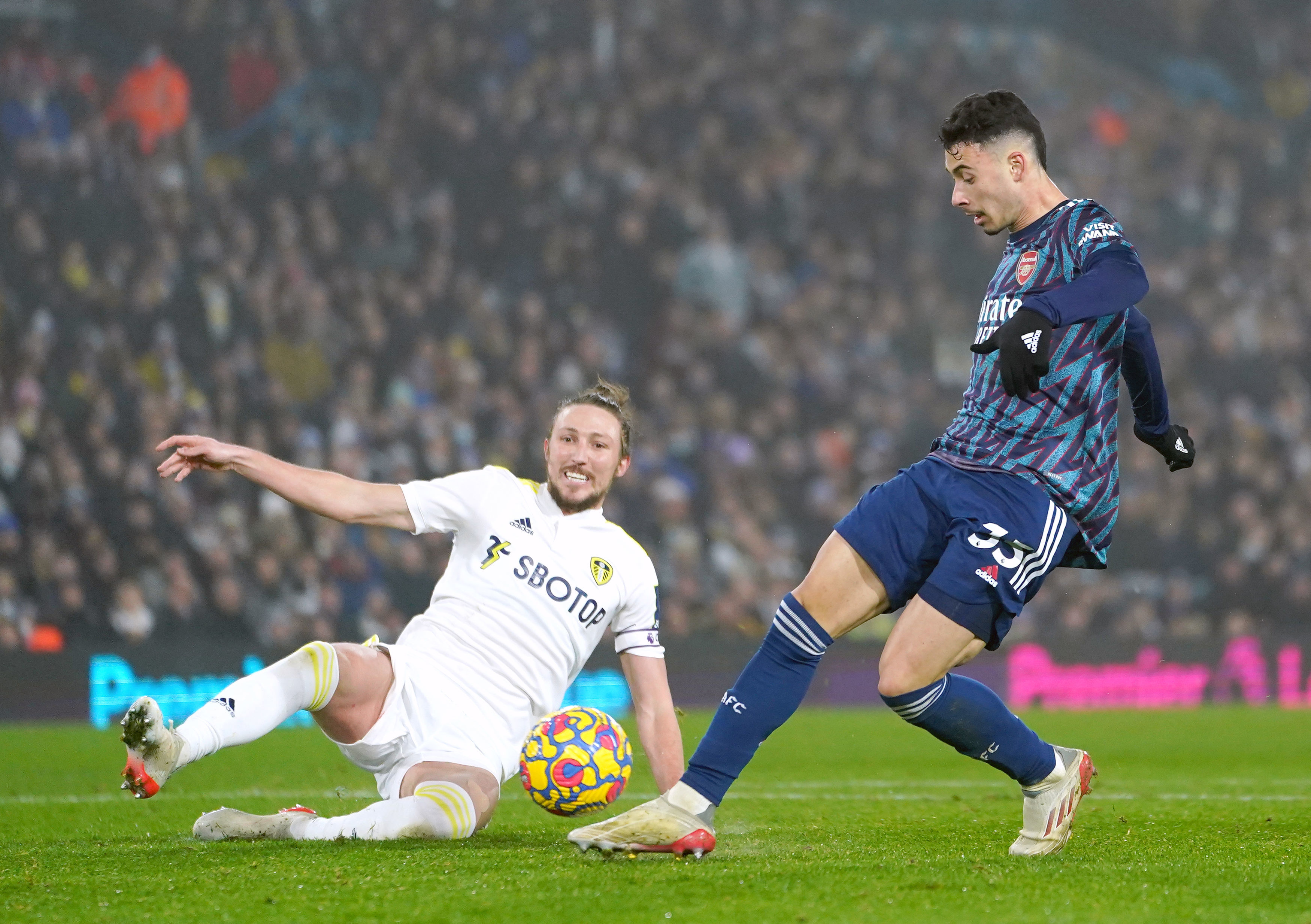 It’s now three defeats on the bounce for Marcelo Bielsa’s side, and with their injury crisis showing no signs of immediate relief, it could get a lot worse before it gets better.

The Leeds team picked itself with ten out.

Cody Drameh was making his first Prem start at right-back after defenders Diego Llorente – out with Covid – and Charlie Cresswell were late withdrawals.

And their bench looked more like a crèche with 15-year-old Archie Gray – great-nephew of Whites legend Eddie – among the subs to become the club’s youngest player to appear in a matchday squad.

Smith Rowe was a replacement again despite scoring off the bench versus West Ham, with the Gunners unchanged.

Arsenal started the match in the top four for the first time since last October and were all over the Whites from the off.

Odegaard was the conductor, beautifully playing in Alexandre Lacazette and Thomas Partey inside the first four minutes. 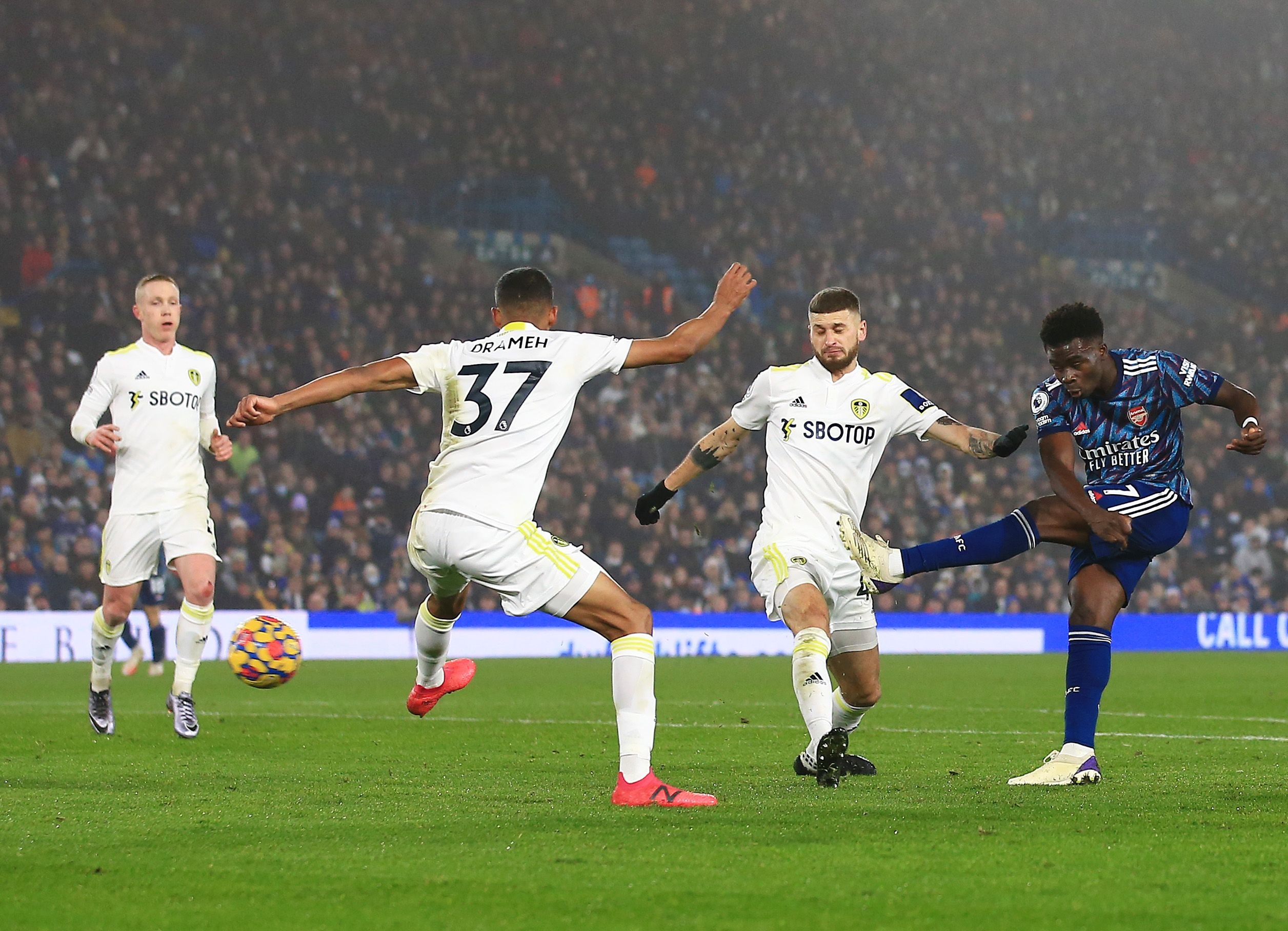 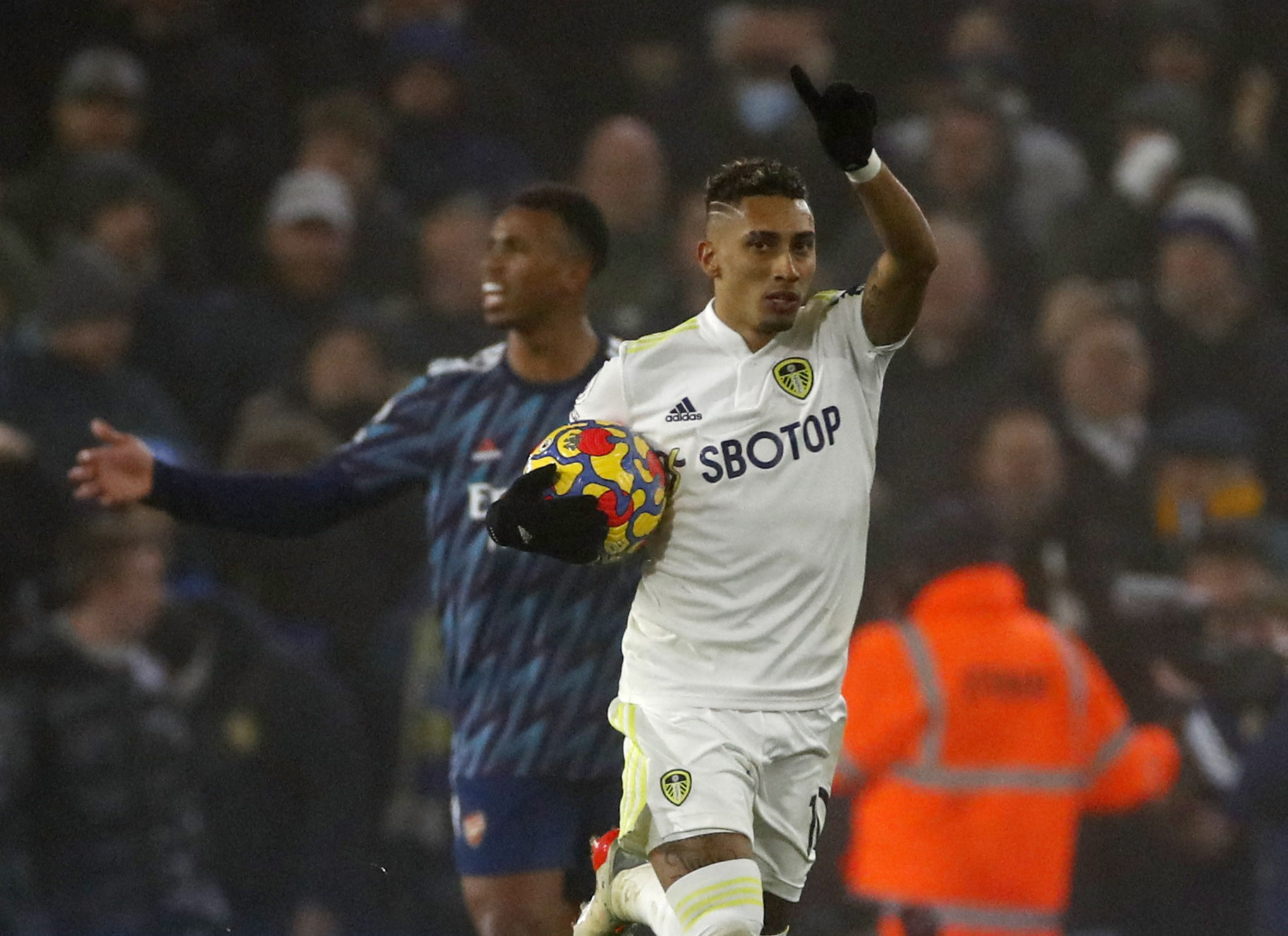 Illan Meslier slid to save the first but could only watch on as Saka somehow fired the rebound wide, before the French keeper got down superbly to his left to deny Partey.

A rowdy Elland Road under the lights was some sort of leveller but, when down to the bare bones, there is only one outcome if you can’t stop making sloppy mistakes.

Saka started the move for Martinelli’s first 16 minutes in, nicking it off Stuart Dallas on the right and driving in field.

Laid off to Lacazette, the Frenchman moved it onto Granit Xhaka who went down under a nudge from behind at the top of the box.

Ref Andre Marriner waved play on but Adam Forshaw recklessly dithered on the ball, allowing Lacazette to get a foot in.

And when it breaks to Martinelli these days the net usually bulges, and the Brazilian duly obliged by hammering past Meslier.

It was the north Londoner’s 7000th top-flight goal, and they notched their next 12 minutes later. 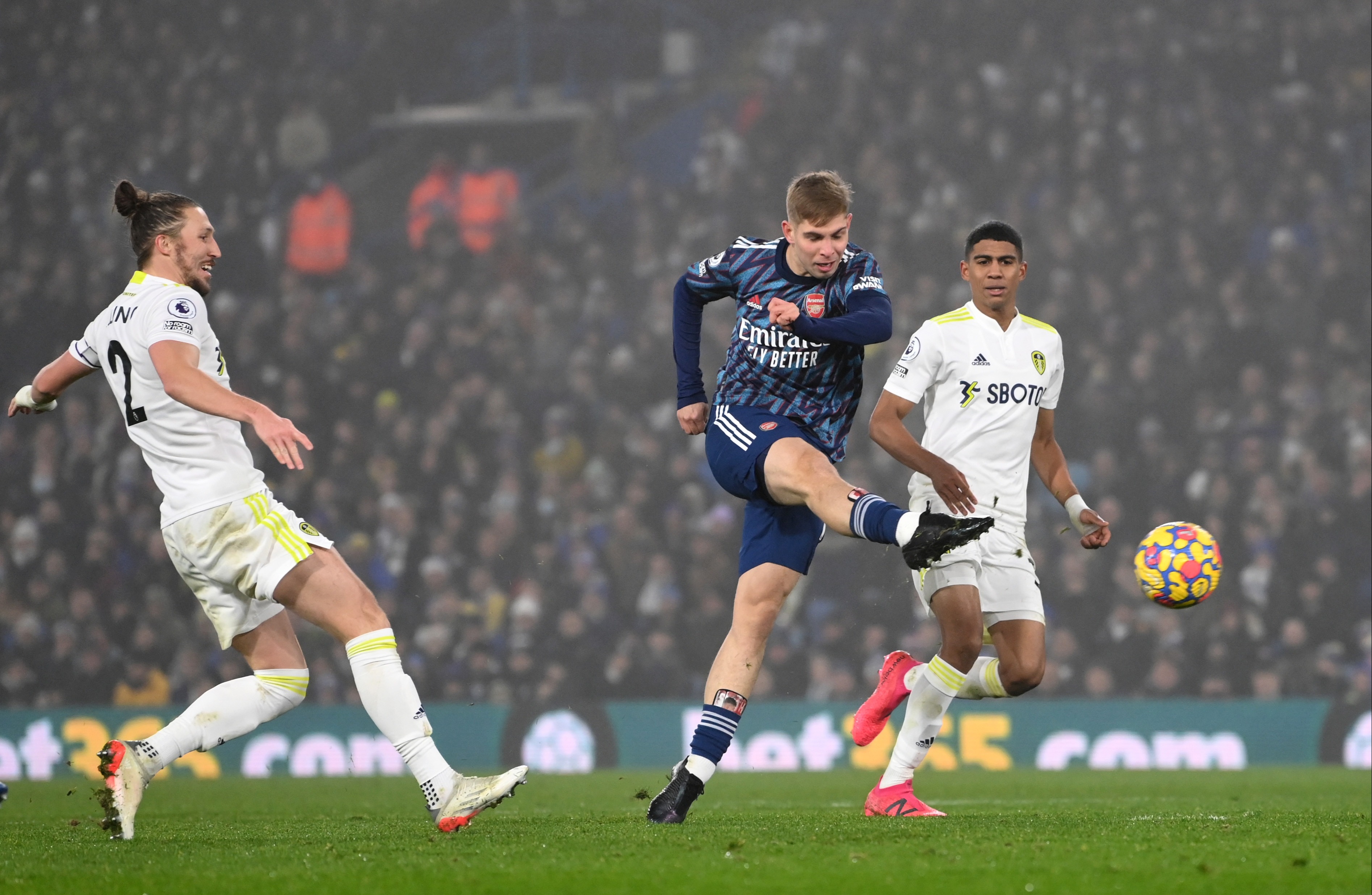 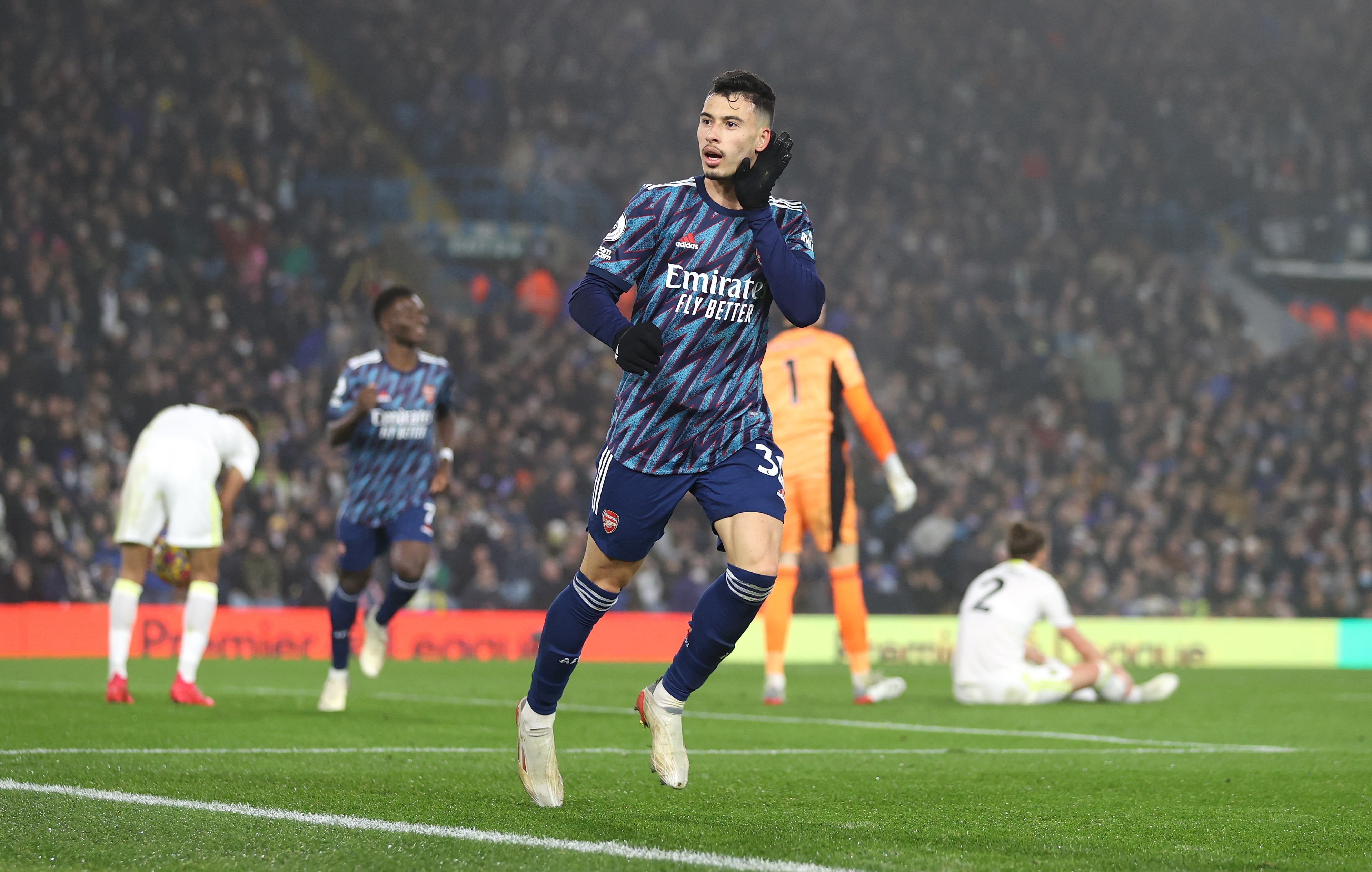 Raphinha really should have equalised before but put a golden chance wide after being played in over the top.

And the game was virtually done and dusted when Martinelli made it 2-0 after Dallas gave it away again.

Xhaka’s ball through Leeds’ ‘defence’ was a beauty, and the youngster did it justice with a delicious dink over Meslier.

Fury – and the odd missile – rained down on Martinelli as he wheeled off to celebrate – leading Marriner to instruct Saka to stay within a safe distance after Arsenal’s third.

The hosts were all over the place again as Saka darted in from the right.

He got it back after it broke to Lacazette, and from the left of the box he took one touch to take Drameh out of it before his shot deflected off Mateusz Klich and in.

Leeds were indebted to Meslier’s eight saves for keeping it down to 3-0 at half time.

The Frenchman was barely needed after the break as Arsenal stepped off the gas, and the hosts were gifted a route back into it 75 minutes in when Ben White clattered into Joe Gelhardt and conceded a penalty.

But as they piled forward, Arsenal struck on the break to make it 4-1.

Tyler Roberts lost it in midfield, Odegaard threaded another pearlier through, to sub Smith Rowe, who let the chipped ball bounce before firing past Meslier.

Mike Tyson beats up plane passenger who was harassing him