Home » Liverpool bus 'is BLOCKED from getting to Old Trafford'

A vehicle believed to be Liverpool’s team bus has reportedly been blocked and had its tyres let down ahead of the Reds’ visit to Manchester United for their rescheduled Premier League fixture.

United have bolstered security presence ahead of tonight’s fixture, due to kick off at 8.15pm BST, with dozens of security staff and Greater Manchester Police officers seen preparing additional barriers outside Old Trafford. 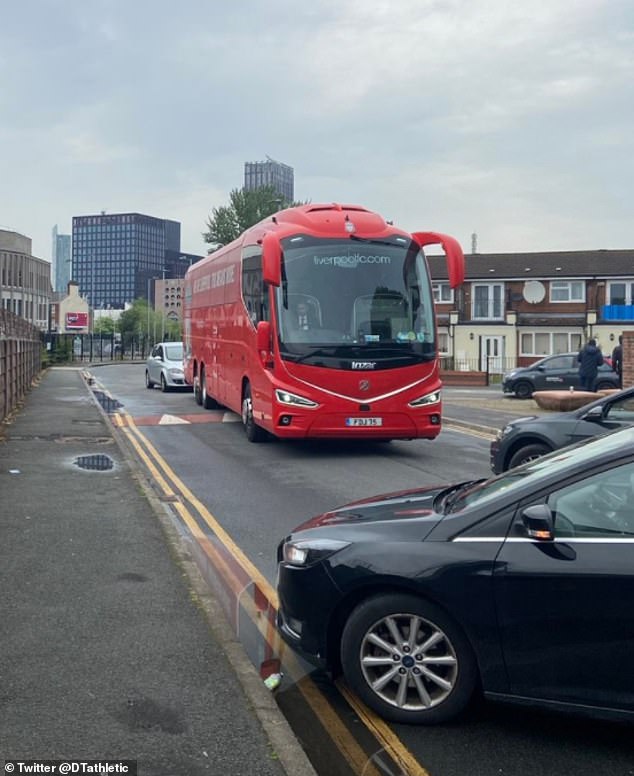 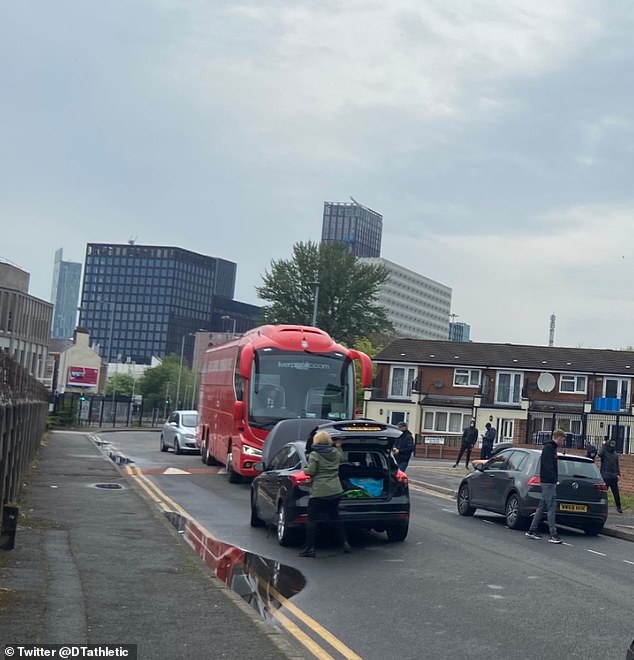 According to The Athletic’s Daniel Taylor, an official Liverpool bus’ tyres have been let down after being blocked in a side street near the team hotel after departing for the ground at 6pm.

Police swiftly arrived and set about clearing the road with a reported 50 fans at the scene, and the bus was seen on the move again behind a police van.

Supporters are beginning to gather outside the ground once more, amid stringent measures to ensure that the game is not halted by anti-Glazer protesters for a second time.

Ahead of the rearranged date tonight, security staff took every precaution in formulating a plan well in advance to prevent a repeat protest from fans. 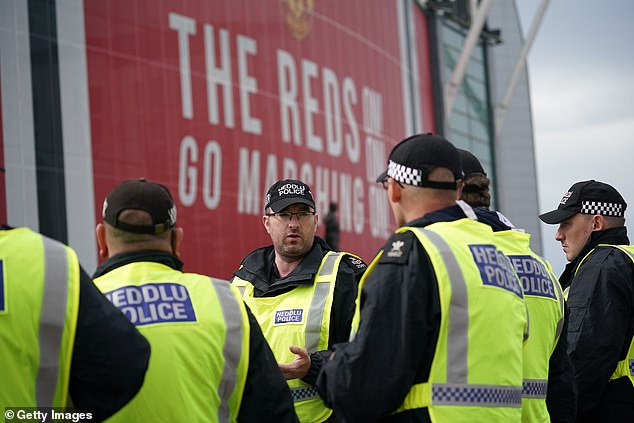 United stars also altered their normal routine as they drove themselves into Old Trafford in the early afternoon to beat fans to the stadium, having found themselves barricaded in the Lowry Hotel when chaos dominated the build-up to the original meeting.

‘Nothing different for us, the most important thing for us now is to focus on the game,’ United star Bruno Fernandes told Sky Sports from inside Old Trafford.

Sportsmail revealed on Wednesday that United mounted a top-secret operation to stop anti-Glazer protesters from disrupting their plans for Thursday’s re-arranged clash with Liverpool.

United have adopted a siege mentality, with players sworn to secrecy prior to the day of the game over their preparations and staff were given information on a need-to-know basis to avoid leaks and limit the security threat. 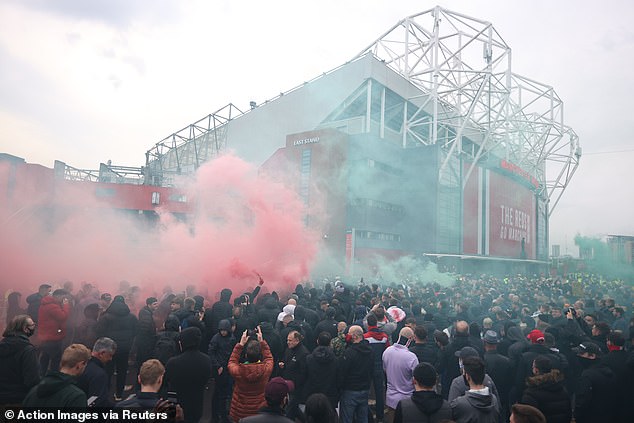 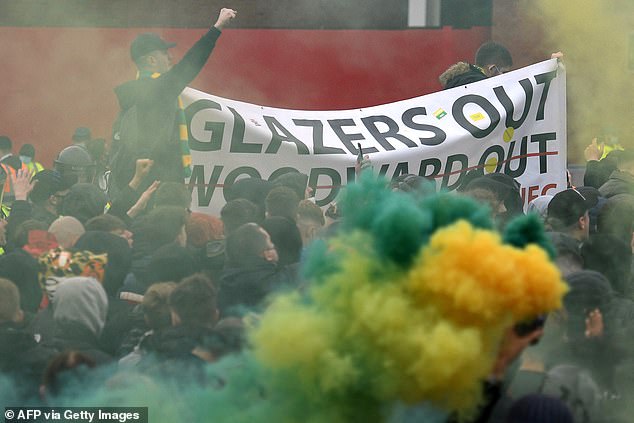 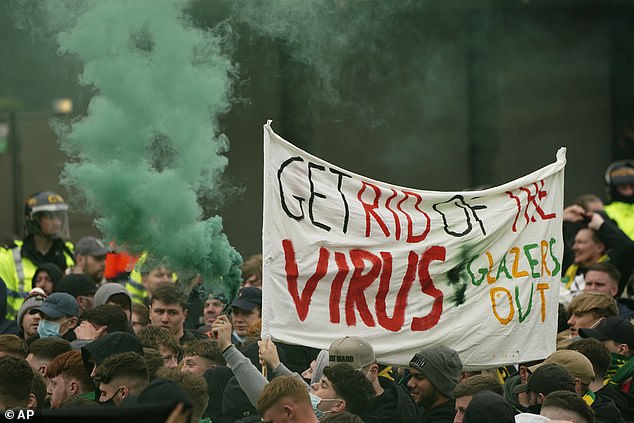 The club are trying to prevent a repeat of the scenes that caused the fixture to be postponed 11 days ago when protesters blocked the team from leaving the Lowry Hotel and hundreds more clashed with police at Old Trafford.

Last week, the departure time from Carrington for the Europa League semi-final against Roma in Italy was kept under wraps until the last minute amid rumours that fans might try to sabotage the team bus en route to Manchester Airport.

The players stayed at home before Tuesday’s game against Leicester and were only told on Monday night to meet at the training ground before travelling to the stadium. 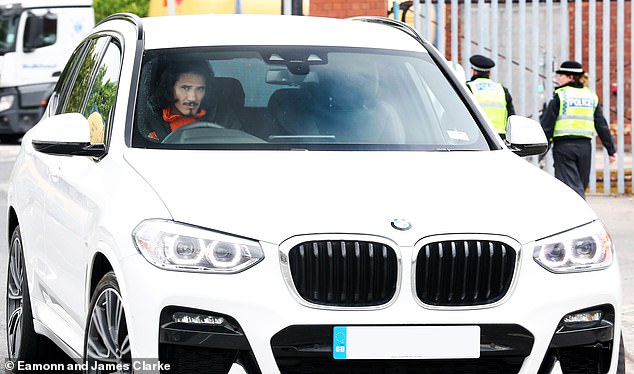 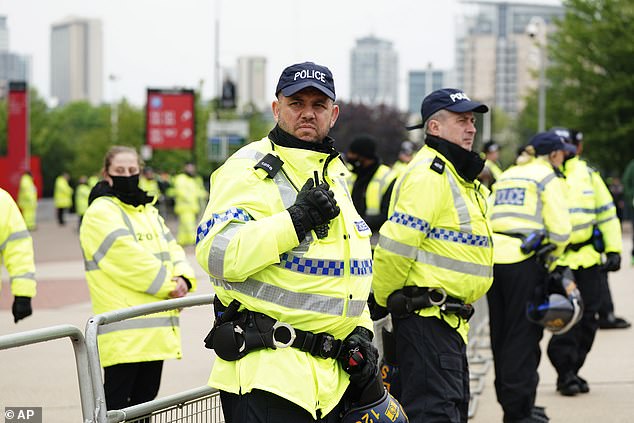 Sportsmail understands plans changed again ahead of Thursday night’s game against Liverpool. There was visibly tighter security to prevent further disturbances after it became the first Premier League fixture to be called off due to a protest.

United showed off a heavy police presence for the home game against Leicester on Tuesday, the first match at Old Trafford since the Liverpool postponement.

A 10ft high red wall was erected at the south-east corner of the stadium – where protesters twice broke in and got onto the pitch – as well the north forecourt in front of the Sir Alex Ferguson Stand.

Additional steel barriers were also put in place as part of the heightened security operation.

Having prepared for a peaceful protest last time out which then descended into violence, the club are now trying to ensure that their three remaining home games of the season go ahead safely.

Boss Ole Gunnar Solskjaer called for calm following the ugly scenes at the start of the month, asking fans to keep the peace if they are to protest and make their voices heard once again.

The United boss said: ‘Security measures are being looked at, of course, and I hope that we can keep the protests – if there are protests – down to loud voices, nothing violent.

‘We want to listen. The players want to play the game.