Home » Sport » Marsh under siege from Harris for Test spot 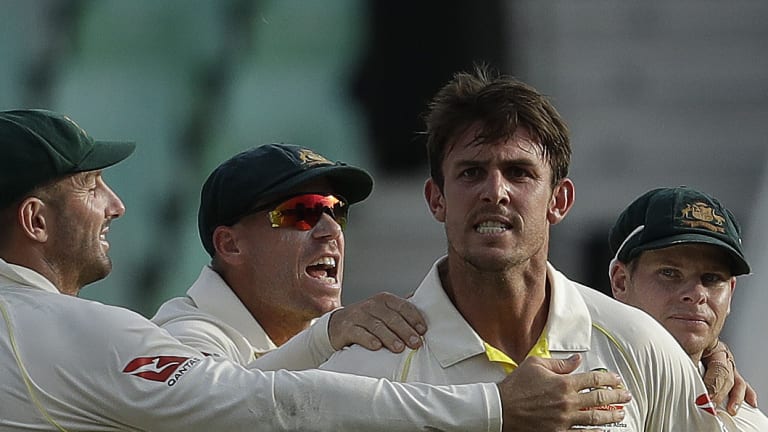 Ball and all: Can Mitchell Marsh’s bowling save his Test spot?Credit:AP

After peeling off a big century at the start of November, Marsh missed the chance to cement his place in the side by failing to reach 50 in his past four Shield innings.

Handscomb staked his claim  by making 81 and 53 in a low-scoring game at the Gabba last week having made a strong start to the season  against the red and white balls.

Marsh acknowledged that his place in the side was up for grabs after his lean series against Pakistan.

"After the UAE, there's no doubt that there's a few questions marks over me, so I'm just really pumped if I'm selected to get out there and play in front of Australian crowds again," Marsh said on Tuesday.

Marsh's bowling appears his strongest argument to a place in the side,  although what appears a well-grassed deck will reduce the value of his seamers.

Marsh bowled more frequently earlier in his career when his pace hovered in the 130km/h range but shoulder and ankle injuries have affected his power.

The all-rounder has acknowledged he needs to bowl more to keep his place in the team, a point echoed by former Test paceman Ryan Harris.

"My goal for this summer is to start chipping in with the ball and get a few more wickets for the team," Marsh said.

"I love coming on in the graveyard shift, 70 to 80 overs when the ball's doing nothing, and trying to sneak in a wicket. I really want to take my bowling to the next level in this team. That's about taking your opportunity when you get it."

There were positive signs for the uncapped Harris at the team's main training session for the week on Tuesday.

The baggy green aspirant conducted a lengthy fielding drill to practice his  close catching, which is where Test newbies traditionally field, and was also given a warm pat on the back by coach and selector Justin Langer during his net session.

It's hard to argue that Harris has not deserved a place in the Test XI having proven himself to be the form player in the Shield across the last three seasons.

Harris' selection would ensure Australia avoids a dramatic reshuffle of the batting order, which was one of the factors that brought the team unstuck in the UAE when Usman Khawaja was moved from No.3 to the top of the order.