Genevieve Beacom has heard it time and time again – that she should be playing softball “because it’s a girls’ version of baseball”.

But the 17-year-old from the Mornington Peninsula has long made a habit of proving people wrong, of using their ignorant comments as fuel for her fire. 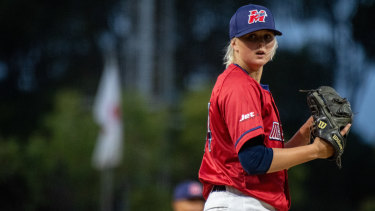 And on the weekend, Beacom – who’s long been a trailblazer in her sport – made history when she became the first woman to pitch and play in the Australian Baseball League.

The tall lefty shone as she pitched a scoreless sixth inning for the Melbourne Aces in their Melbourne Challenge Series against the Adelaide Giants after the ABL season was called off before it even started due to the impact of COVID-19.

For Beacom, ever since she was five years old and tried tee-ball for the first time after watching her older brother Sam having so much fun, her sport has always been about enjoyment first and foremost.

But she also knows the magnitude of her achievement at Melbourne Ballpark.

“I understand it can have a lot of impact, particularly on other women playing baseball,” she said.

“At times I think about what I’ve done, and that I’m proving all these people wrong. It’s possible for girls to play what people think is a men’s sport … and at times it has been a big motivator, for sure.”

Beacom takes the comments in her stride – she hears them, but doesn’t internalise them.

“I take it very jokingly and light-heartedly because the people who say it are people I don’t know and people who aren’t close to me,” she said.

“But I understand that if it happened to another person, or another girl playing baseball, it could have a huge impact on them and how they move forward in the sport, or if they quit entirely.

Beacom has long been a trailblazer in her sport.

“It started off in tee-ball and I just went up through the age groups, and my first big achievement was probably in 2016 when I played with the Southern Mariners in Little League as the first girl to ever play in that team,” she said.

From there, she represented her state and country in both female and mixed teams. In each level she competes, she proves her ability.

In 2018, she played in the youth women’s competition and recorded 17 strikeouts in the grand final, and the following year she played for Victoria in the under-16s – the first girl to be a part of that side in what was thought by many to be a boys’ competition.

Beacom’s strengths are her accuracy and discipline, as the Adelaide Giants became acutely aware on the weekend – when she gave up no runs and no hits in the sixth inning.

And her biggest weapon? “That’s my curveball.”

At the end of last year, Melbourne Aces coach Pete Moylan, who is Australian baseball royalty, offered Beacom a position as a development player for the club. And he’s not the only high-profile figure who’s long been on her side. Fellow former MLB player Graeme Lloyd is another.

And along with Sam, who’s just returned from college in the US, and Stu Holding – her first coach – they’ve helped mould her into the player she is. All of her coaches have.

Beacom dreams of heading into the US college system and ultimately playing professionally. Her performance was noted by baseball fans and experts as far away as America.

Stepping out for the Aces wasn’t the first time she’d made history in the sport she loves so dearly, and it likely won’t be the last, either.