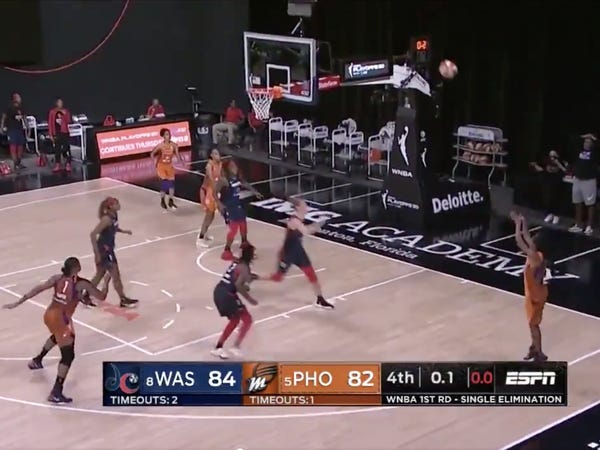 The Phoenix Mercury guard drained a buzzer-beating corner three to lift her team over the Washington Mystics in their win-or-go-home matchup in the first round of the 2020 WNBA playoffs.

It was poetic justice that Peddy's shot would send the Mystics home. Peddy joined the Mercury less than a month prior to Tuesday's game after getting waived by her former team — the Washington Mystics.

"They released me, so for me to hit that shot against them, it's just like a fairytale moment," Peddy said after the game. "I don't think you can write it up any better than that."

With 5.8 seconds remaining in the game and Phoenix down by two, WNBA legend Diana Taurasi inbounded the ball to four-time WNBA All-Star Skylar Diggins-Smith at the top of the key. The crafty point guard skirted around a trap to penetrate the paint, and as three Washington defenders closed in around her, Diggins-Smith rose up to launch a rainbow pass over the crowd and into Peddy's hands.

As the Mystics' Leilani Mitchell charged out at Peddy, the 31 year old pump faked, sending Mitchell soaring out of bounds and giving Peddy the space to let a shot fly and swish through the net.

"That was a dream come true shot right there," Peddy said. "That was my first ever game-winning shot and to make it on this stage at this moment — man — it's a great feeling."

Though Mercury head coach Sandy Brondello admitted after the game that the play had actually been drawn up for Taurasi, Peddy insisted that she had spent her whole basketball career preparing for a moment like this.

"That's a shot you take every day in the gym as a kid," Peddy said. "You just practice throwing it off one leg, throwing it up there, posing."

Peddy and her Phoenix teammates face a quick turnaround in the WNBA's bubble at IMG Academy in Bradenton, Florida. The No. 5 Mercury will return to the hardwood Thursday at 7 p.m. to face the fourth-seeded Minnesota Lynx in yet another single-elimination playoff matchup.

Newcastle tips: Racecard, analysis and preview for the feature contest as racing returns on Monday

Neil Francis: 'With Bundee Aki's Connacht contract running down, his days in an Ireland shirt may be numbered'