A reinvigorated Moana Hope suggests she will always have her critics but insists she is not concerned by external opinions.

Having been signed by Collingwood as a marquee player ahead of the first AFLW season, Hope, perhaps more than any other female player, has borne the brunt of public and media scrutiny across the first two years of the national women’s competition. 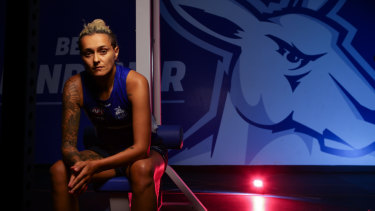 “I was leaving training in tears almost every session. It was just so hard,” Hope told The Age.

“We’re supposed to be elite athletes but we’re there part-time. There’s probably one person there that looks after the mental health, and one amongst 30 girls is probably not enough.”

But Hope says things are dramatically different this year. Having signed with expansion club North Melbourne, she is in a much better place mentally.

The veteran cannot speak highly enough of the Kangaroos, who she describes as a family, saying that she loves coach Scott Gowans and heaping praise on football operations manager Laura Kane.

“[North] put the person before the player," Hope said.

“When I first signed with them, all they cared about was me getting right physically and mentally.”

Hope, who turns 31 on Valentine's Day, said she was probably the type of person some people would always view unkindly.

“People are going to have an opinion no matter what. I could come out this year and kick 100 goals and people would still have something negative to say,” she said.

“I don’t care about that outside noise. Especially this year.”

Feeling fit and ready to fire, starting in Sunday’s game against Carlton in Hobart, Hope has her eyes on a premiership in North's first season, and said she was keen to help the Roos thrive.

“I haven’t been this excited and nervous [before a season], Hope said.

“I think the other couple of years I’ve gone in I’ve just been more scared. But this year I’m as happy as a kid about to play their first game in under-12s.

“All I’m out to do is to make sure I do the best I can to give the team what I’m fully capable of.

“There’ve definitely been more downs than ups. But I guess that’s what makes you stronger, right? I’ve hit rock bottom. I haven’t played anywhere near where I’m capable of. Yet.”

Hope also refuted a suggestion she was motivated by comments about women’s football made by premiership coach Mick Malthouse which led Hope to storm out of a function both were attending.

“I don’t really want to waste my oxygen on that anymore. I think the girls will let their actions speak for them, as will I.”